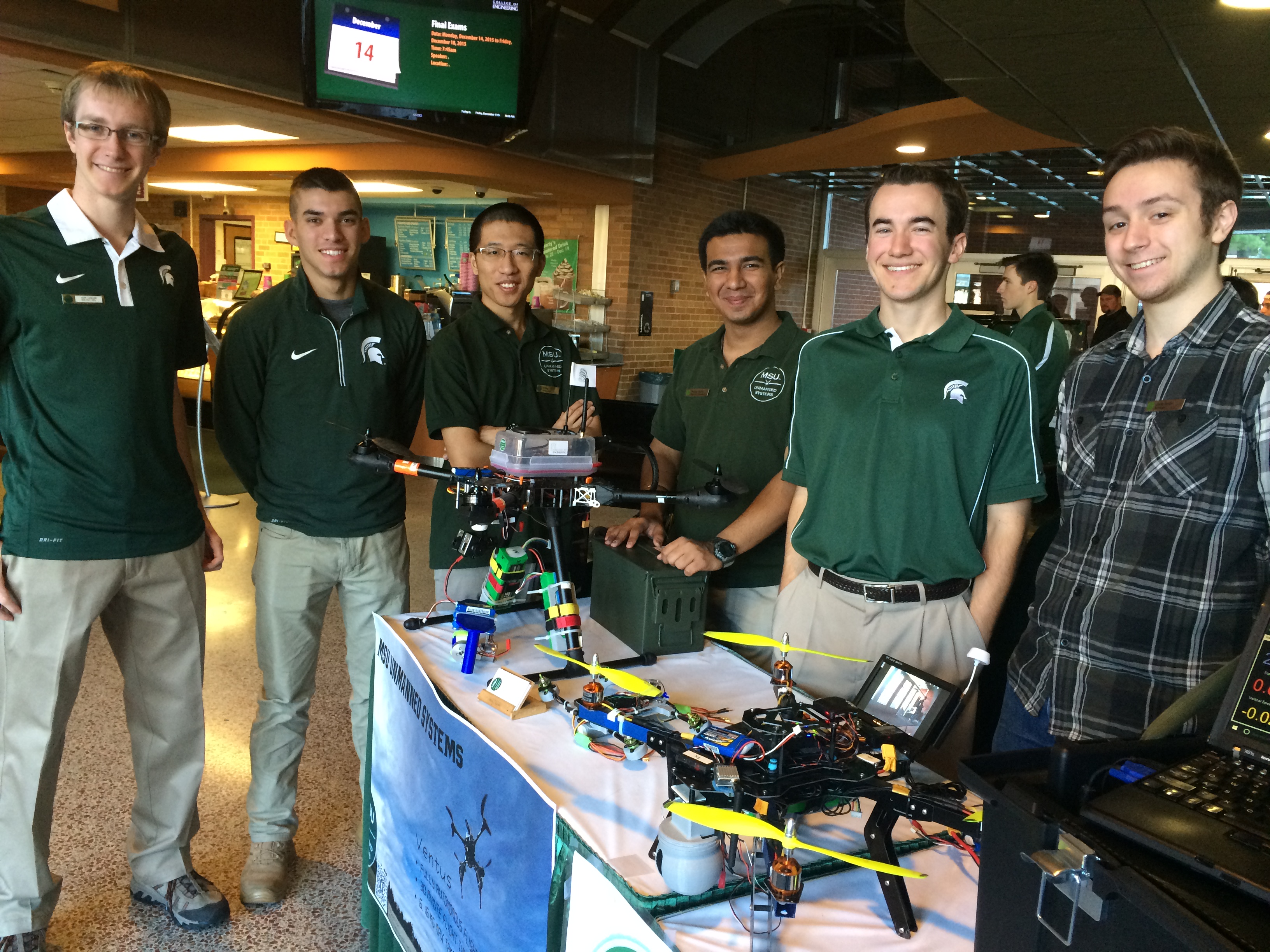 MSU Engineering’s team, which has 17 members, is gearing up to compete at the 2016 Association for Unmanned Vehicles Systems International (AUVSI) Student Unmanned Air Systems event in June. The competition will be held at Webster Naval Field in southern Maryland’s St. Mary’s County.

As a co-founder of MSU’s Unmanned Systems Team, Hanish Mehta happily embraces the UAV phenomena that he calls “the technology of tomorrow today.” Mehta is an applied engineering sciences senior from Mumbai, India.

“We are building a fully autonomous UAV, with flight times of greater than 30 minutes and a payload capacity of more than five kilograms,” he said.

The team is working on two quadcopters.

“One is huge and the other one fits in my backpack,” he said.

Much of the team’s assembly work takes place in Mehta’s apartment, where he houses a 3D printer in his living room to fabricate custom parts for the team’s UAV. The team also operates out of two workshops in MSU’s Computer Center, located next to the Hannah Administration Building.

“We house a fully equipped mechanical and electronics workshop, where we can fabricate using traditional methods and work on full-size projects that wouldn’t be possible in my apartment,” he said.

The team’s UAV uses a target recognition program during competitions that was written by the team’s computer science sub-committee. The software allows the team to keep track of the number of geometric targets detected and relays target information to mission control stations using an on-board payload computer.

To practice, they go to off-campus locations where they can fly in accordance with hobby category regulations.

“Our team always makes sure that the area we are using is cleared, and we fly at an altitude of less than 400 feet,” Mehta said. “We have two emergency retrieval members on stand by and one spotter always assists with flight operations to look out for potential hazards.”

Rules regarding locations in which UAVs can fly have been debated for some time. Officials at MSU are among the many who have been reviewing the rules, seeking clarifications to set campus guidelines and requirements.

In December, the U.S. Department of Transportation’s Federal Aviation Administration announced an online registration process for owners of unmanned aircraft weighing between half a pound and 55 pounds that requires airspace users to know airspace rules and be accountable to the public for flying responsibly. The new registration system is for hobby or recreation users, but not aircraft used in businesses. More FAA registration enhancements are expected this spring.

“With retailers selling around a million drones this past holiday season alone, I’m hoping this all gets figured out because there are emerging technology jobs in aerospace and defense organizations,” Mehta added. “And, I for one, would like to explore where the career possibilities will go.”

In the photo above, members of the MSU Unmanned Systems Team exhibited their UAVs during Design Day in December. Pictured (from left) are John LeFevre, Paul Schulman, Yi Wei, Hanish Mehta, Matthew Auvenshine, and Zach Taylor.

One thought on “MSU's Drone Team Gearing Up For National Competition”