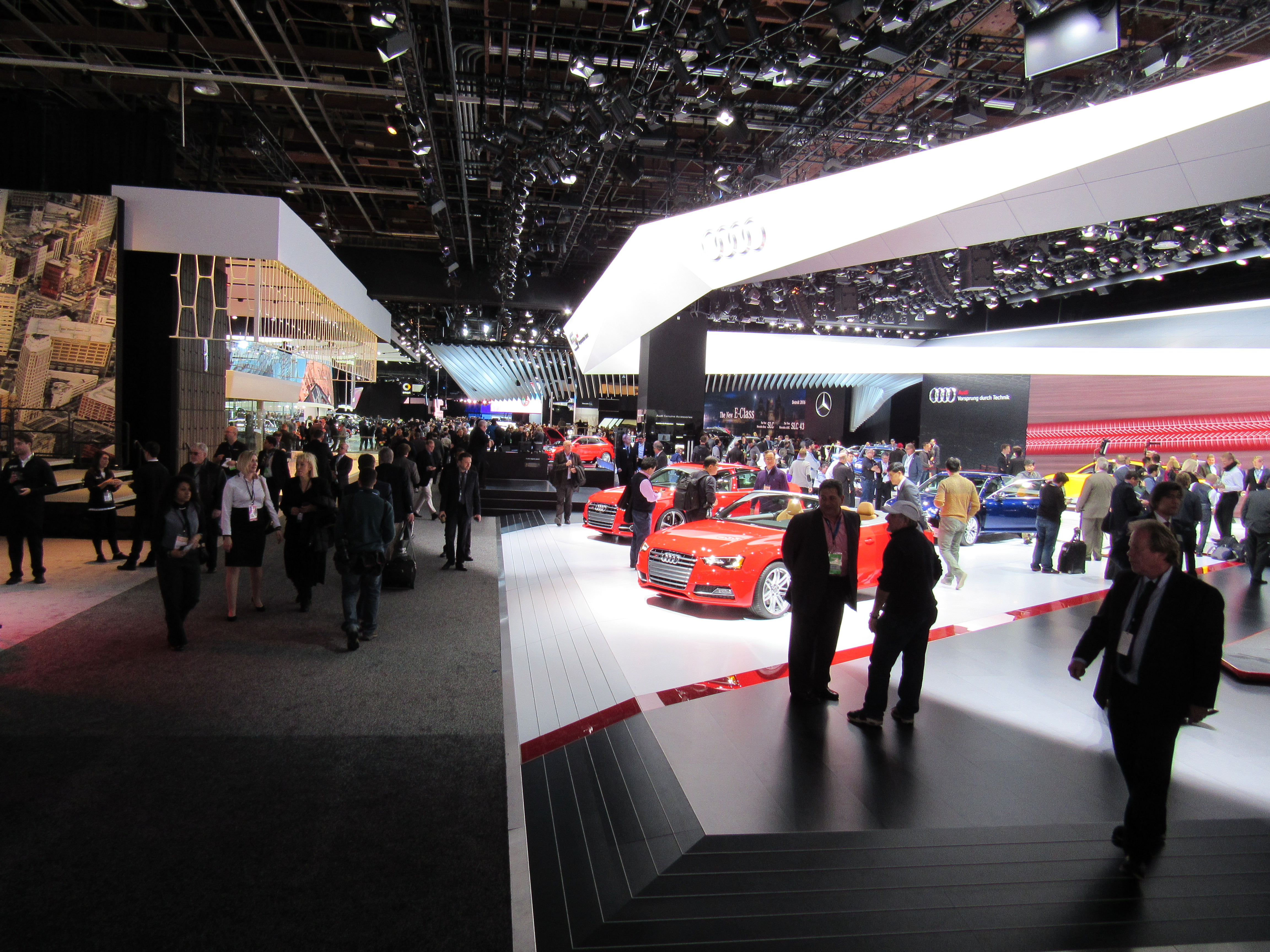 DETROIT — First of all, the North American International Auto Show really is different this year.

A few weeks ago, the tech podcast I co-host with Mike Brennan of
Michigan Technology News had Max Muncey, NAIAS public relations manager, on as a guest. And Max told us that fully 70 percent of the auto show floor this year was new from last year — a $200 million investment by the auto industry.

Well, the auto show looks every penny of that total, and then some.
People who go to the show every year, like me, will have to hunt down some of their favorites.

Like Ford. (Hey, I’ve lived in Dearborn almost 20 years now.) From the place I always used to enter the show, it was immediately to the right, and I’d start my visit there. But now? Now that’s where Chevy is. The only clue as to Ford’s new whereabouts is, however, nicely ironic. If you look right through the Chevy exhibit to the back wall of Cobo Center, you can see the Ford logo — with its slogan, Go Further. Yeah, as in right past Chevy. Not sure if that was intentional, but it worked, and was worth a chuckle.

And the far northwest corner of Cobo, back where General Motors used to be, is now Fiat Chrysler Automobiles — Alfa Romeo, Chrysler, Dodge, Fiat, Jeep and Ram.

As for the rest of the show, here are one tech geek’s impressions,
based on a three-hour walk through.

* Okay, so I’ve figured out the SECOND thing I’m going to do after
winning that $1.3 billion Powerball jackpot (after buying real estate). I’m buying the $141,000 BMW i8 hybrid supercar. A 228-hp gasoline engine coupled with a 129-hp electric motor equals a top speed of 155 mph (and a whole lot of trouble with law enforcement, probably).

* Then there’s Volkswagen. Diesel cheats or no diesel cheats, I still love the look and feel of their cars. The $33,000 VW Golf GTI, with 220 horsepower yet still 34 mpg, looks like a ton of fun for the money. Or you could indulge your practical side with the $29,000 Golf Sportwagen, and its 36 mpg out of 170 hp.

* Lincoln’s exhibit moved from an afterthought in the Ford exhibit front and center with other luxury marques like Porsche and Infinity. But I still think the twin-wing grilles look silly.

* The Nissan exhibit hasn’t changed, which means it STILL looks like it just landed from another planet.

* Small SUVs are all the rage these days, and I really liked the looks of the Mazda CX-3, an all wheel drive four-passenger cruiser for $30,000 that claims 32 mpg on the highway. It’s 95 percent Japanese content, though, which means I’ll never buy one. Hey, Mazda, what happened to you guys building cars in Flat Rock?

* Be still my heart, I LOVED the Ford Fiesta ST, the pocket rocket version of my commuter car. A mere $24,400, 26 mpg city, 33 highway. You put 197 horsepower in a car that tiny and I can only imagine how much fun it would be. Mine is like an eager little puppy now with a mere 120 hp.

* Some auto critics say Chrysler’s new minivan doesn’t look like a minivan. Baloney. It’s a rolling box with a big square end. It’s a minivan, all right. It’s renamed the Pacifica (the former name of its undistinguished midsize SUV). Listen, I owned minivans when my kids were little in the 1990s and 2000s. They’re handy as all heck. But there’s no hiding the fact that it’s…a rolling box with a big square end.

And as usual, the Detroit Auto Dealers Association pampers the media horde to an almost embarrassing degree. Cobo’s spectacular Riverfont Ballroom is transformed into a gorgeous media center for the event, with superfast connectivity, unlimited coffee and soda, and today, a very nice lunch — your choice of chicken or veggie pot pies or shepherd’s pies. (I chose the latter, which featured nice big chunks of tender shepherd along with the veggies and mashed potatoes.)

How fast was the internet at the auto show press room? Well, remember that scene in “Spaceballs” where they go to “ludicrous speed”? Try 541 megabytes per second download, and 708 mbps upload, with a mere 3 millisecond ping. The provider was Southfield’s very own 123Net (which ESD happens to be touring in one of its exclusive members-only tours Feb. 17). How fast is 708 meg upload? You could upload an hour of HD video in just a few seconds. Which, of course, is precisely what a lot of the thousands of reporters at NAIAS are doing.