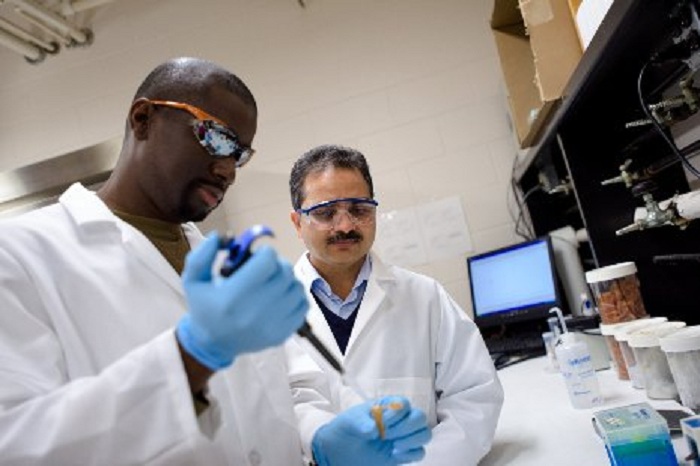 HOUGHTON — Proteins are like a body’s in-house Lego set. Most of the time, these large, complex molecules fold correctly—but sometimes they misfold, which can lead to a number of different diseases including ALS, Alzheimer’s and Parkinson’s. Many of these interactions, both folded and misfolded, are affected by the surface chemistry of proteins. Specifically, how sticky the proteins are.

The problem is that researchers don’t have highly sensitive tools or methods to measure the stickiness, or the hydrophobicity, of protein surfaces. Now, an interdisciplinary team at Michigan Technological University has gathered new tools to solve the case of the sticky protein. Their work on improving the sensitivity of hydrophobicity detection came out in the scholarly publication Scientific Reports.

Ashutosh Tiwari, an associate professor of chemistry at Michigan Tech and corresponding author on the study, compares a sticky protein to a ball covered in glue with a few craft pom-poms stuck to it.

“When you roll it on the ground, it will non-specifically bind with a lot of gunk,” said Tiwari, at left in the photo above. “What we want to know is how much of that surface is sticky, and if we can define it in terms of stickiness, then we will know the protein’s tendency to bind with gunk, which reflects its ability to interact with other proteins.”

Many of those interactions are a normal function of proteins, but biochemists think extra stickiness can drive the protein misfolding and aggregation process. Protein aggregates are called many names including amyloid, plaques, tangles, inclusions, and pick bodies—the body’s signatures for many neurodegenerative diseases.

Nethaniah Dorh, the study’s lead author and a doctoral student with Tiwari, focused on this work for his dissertation. In this video, he explains what inspires his research.

Tiwari’s lab focuses on untangling these misfolded proteins. But in order to peel apart the details of protein stickiness, they had to recruit researchers to help them design chemical probes that are sensitive to surface hydrophobicity.

Bring in the Synthetic Chemists

Tiwari collaborated with Haiying Liu, a professor of chemistry at Michigan Tech. As a synthetic chemist, Liu practices both the science and art of crafting molecules. In this case, his team designed and produced several fluorescent dyes based on boron-dipyrromethene (and shortened to BODIPY by researchers) for sensing protein surface-hydrophobicity. Using these hydrophobic sensors, Tiwari’s lab led experiments that measured hydrophobicity in three proteins: Bovine Serum Albumin (BSA), apomyoglobin and myoglobin.

“This is like going from having one 40-watt light bulb and then having 60 of them in the same room, just imagine the difference in illumination,” Tiwari says, explaining that this makes the probes more sensitive as well, which could be useful for sensing hydrophobic proteins at very low concentrations.

A Problem for the Physicists

To figure out why the new hydrophobic sensing probes based on BODIPY core beat out ANS, Tiwari turned to Ranjit Pati, a professor of physics at Michigan Tech. The team shed light by calculating the energy driving the probes’ fluorescence.

Basically, fluorescence works by exciting electrons, and as they calm down and return back to their regular energy levels they emit light. The difference between the calm and excited levels drives the brightness and longevity of fluorescence. The energy gap for several of the hydrophobic sensors is about 2.2 electron volts, ideal for fluorescence.

Tiwari and Dorh say the collaboration was instrumental in the study; each of these steps could have been a separate study. Instead of needing to reconcile the data in hindsight, the team was able to integrate the data up front.

“We also have a way to design future dyes based on this research to improve the process,” Dorh says, explaining that while the ultimate goal for him is to improve protein misfolding detection, the probes could have applications beyond that.

“As a grad student,” he adds, “going forward I have an understanding that collaboration is key to progress — no man is an island.”

And no sticky protein is a lone glue-ball. Solving these clues will enable researchers to pursue hydrophobicity studies within cells, going after the misfolded mafia of cellular and protein interactions.