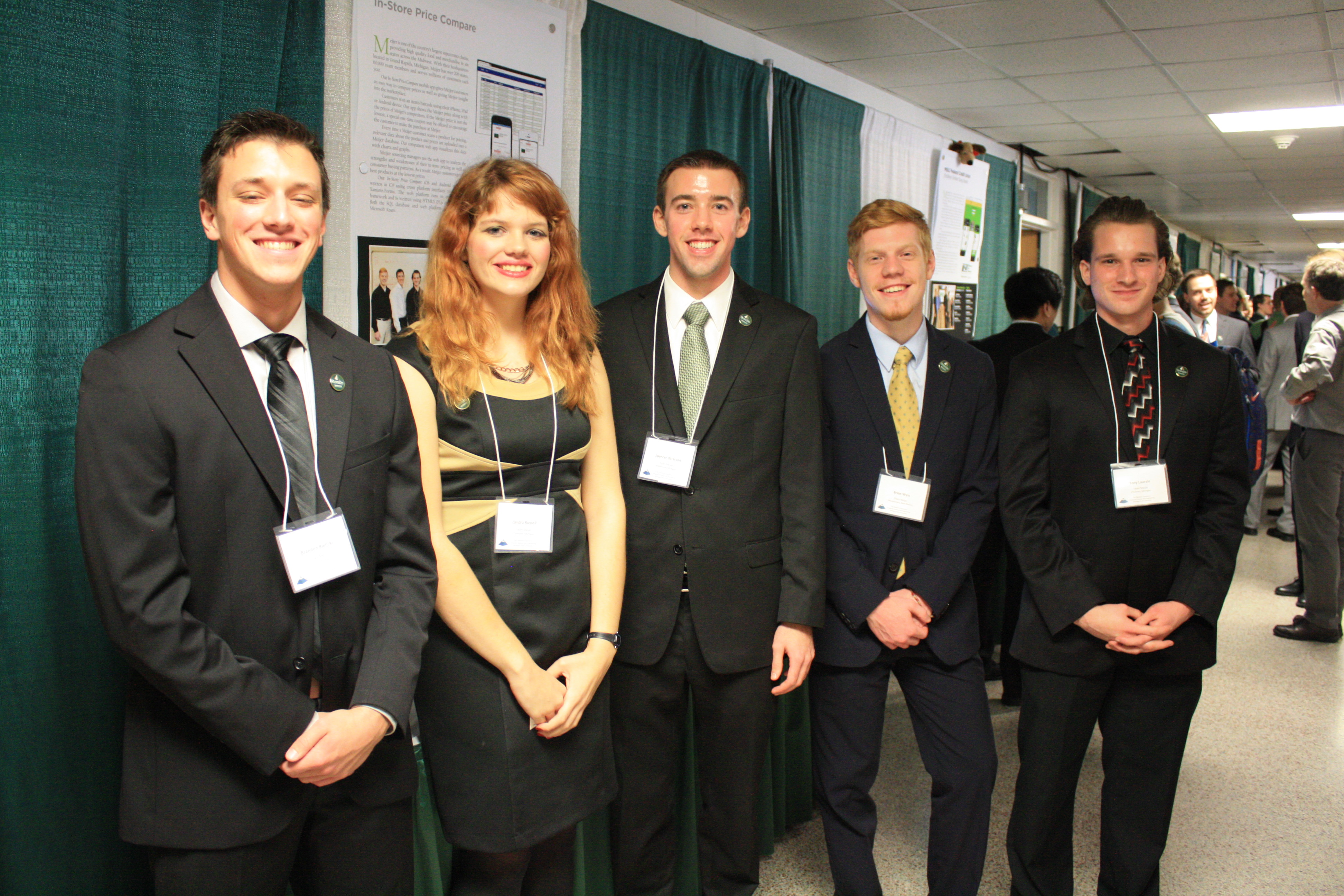 Now in its 22nd year, Design Day takes place on the last day of classes, and has dozens of student teams presenting design ideas for everything from improving manufacturing processes to consumer smartphone apps.

This year, there were 48 senior capstone project teams involving 245 students competing for awards. Thirty-six of the projects were
sponsored by Michigan-based companies and institutions, for which the students were solving real-world engineering problems.

Elsewhere in MSU’s cavernous Engineering Building, another 93 teams and 357 students in freshman engineering classes were showing off their skills at the earliest stages of higher education.

Design Day also features a pre-college outreach program that involved five middle and high schools and 200 students from around Michigan.

“What’s most interesting to me is how creative the projects are,” said MSU engineering dean Leo Kempel. “When you walk around the halls you are struck by how professional the students are, how intense the projects are, and what they are able to get done in four and a half months. In the corporate world, projects like this may take a year or two.”

Kempel highlighted a project sponsored by the Grand Rapids retailer Meijer Inc., an app that allows shoppers to scan the bar code of an item and show its price — not just at Meijer, but at competitors like Wal-mart, Kmart and Amazon. And if it’s more expensive at Meijer, the app gives you a virtual coupon you can use at checkout that lets Meijer meet its competitors’ prices.

“I’m just blown away each time I see what these students have done,” Kempel said. “And this is the smaller of our two Design Days.” (The spring 2016 Design Day — the bigger of the two — will be held April 29.)

Kempel said the fact that 82 percent of senior projects are sponsored by Michigan-based businesses “just emphasizes that MSU is all about the state of Michigan. Over 60 percent of our graduates stay in Michigan, too.”

Touring the projects with Kempel was Melanie Foster, a member of the MSU Board of Trustees, and a real estate investor with a background in landscaping and sod farming. Said Foster: “What I’m struck by is the collaboration involved in these teams. As they go out into their careers, collaboration is such an integral part of the work force. I’m also struck by how many of the projects have a real-world, real-time practical application.”

Among the other interesting project was a toe guard for an athletic
wheelchair, made of an adjustable PVC frame and a foam pad that’s
attached to the wheelchair with hose clamps, developed by Jillian
Hubbard of Sterling Heights, Dylan Smith of Saginaw and Collin Wing of Laingsburg. Freshmen Blaire Izbicki of Pepperell, Mass. and Karly Kruger of Stockbridge developed a first aid smartphone app that’s both funny and useful. And a team of Jordyn Castor of Grand Rapids, Debayan Deb of Kanpur, India, Whitney Mitchell of Alto, Max Miller of Pittsburgh, Pa. and Cody Pearson of Hudsonville developed an incredibly slick text recognition smartphone app for the Okemos-based screen capture technology developer TechSmith.

In civil engineering, the winner of the Rolla Carpenter Award was Entourage Engineering, Chris Rothhaar of Beulah, Alex Zucker of Laingsburg, Alex Wangeman of Boyne City, Tom Bonney of Rockford, Kaleb Sondgerath of Climax, Steven McConnell of East Lansing, and Tony Brehmer of East Lansing, for their design for a reconstructed former MSU power plant on Shaw Lane.

In mechanical engineering, the winner in a design competition for a wheelchair power folding ramp, was a team made up of Patrick Frahm of Frankenmuth, Matthew Marchetti of Clinton Township, Lance Roth of Midland, and Michael Schwartz of Clarkston.