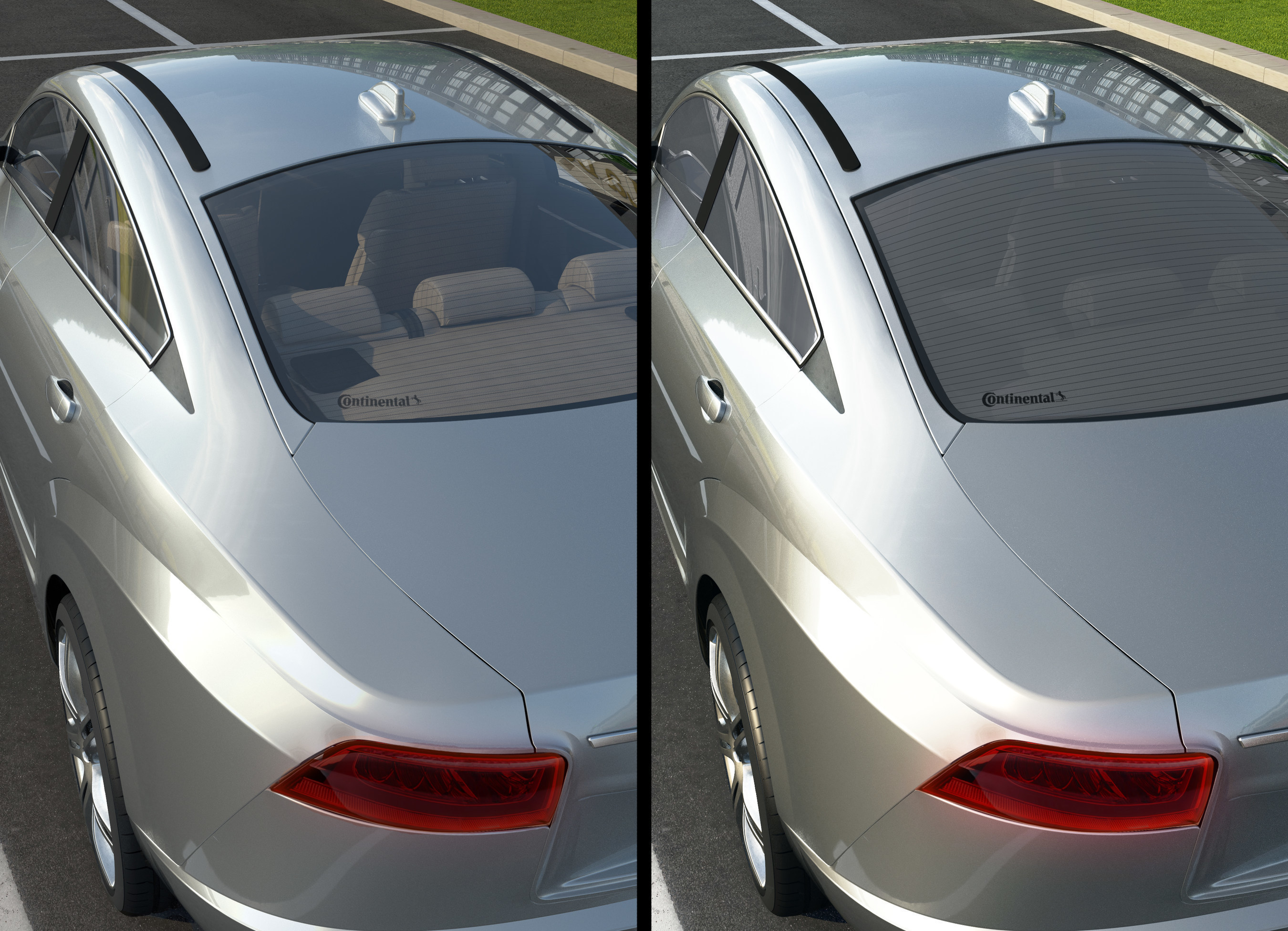 AUBURN HILLS — The German auto supplier Continental, which has its American headquarters in Auburn Hills, has developed a new generation of film technology for shading of car windows.

The “Intelligent Glass Control” uses special films that are inserted into the glass and change transparency through electric control signals. Continental will demonstrate the technology at CES, formerly the International Consumer Electronics Show, the world’s largest technology show, in Las Vegas Jan. 6-9.

“The selective, incremental darkening of the side and rear windows, as well as parts of the windshield, not only offers considerably increased comfort for passengers, but also makes driving safer,” said Andreas Wolf, head of Continental’s body and security business unit. “When the sun is low over the horizon, the driver’s hand instinctively goes from the steering wheel to the sun visor, which results in both impaired visibility and a brief decrease in control of the vehicle. In the future, such situations can be detected in advance and the windows could darken automatically before the event even occurs.”

By using these films, the solar radiation can be reduced more effectively than with other technologies. As a result, heat is kept out of the vehicle, which can significantly reduce the interior temperature. This relieves the air conditioning unit, which can be smaller, more energy efficient and lighter. Furthermore, the weight of the sun visors and mechanical blinds are removed which all lead to positive effects on the environment.

“Our calculations have shown that the CO2 emissions are reduced by a good four grams per kilometer thanks to these measures, ultimately increasing the range of electric vehicles by around 5.5 percent,” Wolf said.

In addition to the reduced heat in the interior, the darkening also effectively enhances privacy. “If the vehicle is parked, the windows darken automatically, so the inside of the vehicle cannot be seen from the outside,” Wolf said.

Intelligent Glass Control also gives designers new options. According to Wolf, the glass surfaces could be extended further, without having to cover certain areas mechanically. The available film still has a slightly blue shimmer, but Continental is expecting a broader range of colors in the future, opening up additional design possibilities. Other effects, from coupling light effects through energy recovery to touch screen functionalities, may also be possible.

Films with embedded particles that can be aligned when a voltage is applied and can be used for targeted darkening of the window have been available for a long time. This technology has only been feasible in the roof area for a small number of high-end cars. Continental is demonstrating the intelligent activation of the “Suspended Particle Device” film technology also for side and rear windows and the windshield, which is a first for application in a test vehicle. Due to legal requirements this is only implemented in the permitted area of the sun visors.

“This production-ready film technology is based on embedded particles that arrange themselves randomly when unpowered and darken the window from the outside, while retaining transparency from the inside to the outside,” Wolf said. “Once a voltage is applied, the particles systematically align themselves in parallel, so that the window becomes permeable to light in both directions. The connection to the vehicle system enables the windows to lighten automatically when you approach the vehicle with a key or smartphone.”

Continental said the technology is still “rather cost-intensive” but that it expects prices to drop due to further promising developments with initial applications in the mobile area. Other alternatives to film technology are based on liquid crystal polymers or electrochromism. The latter uses the ability of molecules and crystals to change their optical properties under the influence of an electric field or a current flow. This technology is already deployed in the car in order to darken the interior and exterior mirror and prevent glare effects. The disadvantage of larger surfaces is the high energy requirement needed to achieve short switching times.

Wolf said the technology that prevails is not crucial, as they all need to be controlled electronically. The essential know-how is in the software and the intelligent connection to the vehicle system.

“Today, it is just a question of when intelligent glass is coming. At Continental, we use our know-how for the entire system and can therefore integrate the desired functions into our electronic control units. We adjust the algorithms so that the behavior of the windows offers maximum safety and comfort for the driver, while improving emission values. The appearance of all windows is optimized with an intelligent reaction to the changing lighting situations, as well as automatic compensation of temperature and aging effects,” Wolf said.