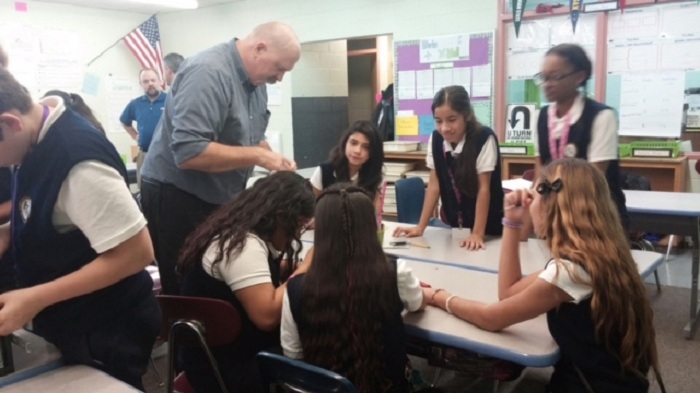 AUBURN HILLS — Mike O’Donnell says he’s wanted to be an engineer since he was 8 years old.

And he remembers Chrysler engineers coming to his high school with fun projects to do as being an important part in confirming that desire.

So when US Farathane Corp. decided to get involved in the Michigan Regional Future City competition this year and asked for volunteers to help mentor teams, O’Donnell said his hand went up without much thought.

“I’ve always wanted to do something like this,” O’Donnell said. “I didn’t know anything about Future City, but Chrysler came in with something similar to my high school, and I really enjoyed it. I still remember this.”

A total of six US Farathane engineers are mentoring three Future City teams in this year’s Michigan Regional competition, which will be held Jan. 25 at the Suburban Collection Showplace in Novi. All the teams are at the International Technology Academy, part of the Pontiac Public Schools.

Future City is a cross-curricular educational program in which students work as a team with an educator and volunteer mentor to design a city set at least 100 years in the future. They develop the city with SimCity gaming software, build a scale model of the city, and develop written and oral presentations about their city. All of these components of the city are judged by volunteer professionals in engineering, architecture, and other technical fields.

The theme of the Future City competition changes each year to keep the competition fresh. This year the theme is “Waste Not, Want Not,” meaning the cities will be organized around efficient solid waste disposal and recycling.

O’Donnell said that in his first meeting with the ITA students, “we spent an hour and a half going over what engineers do. I’ll bet they asked me questions for a solid hour. They asked when I first decided to be an engineer. I said it was probably around eight or nine years of age, when I tore apart my dad’s brand new stereo. Some of the kids nodded and said, ‘Yeah, I could see that.'”

The biggest challenge O’Donnell says his team has faced so far is the amount of time required to field a competitive Future City entry. Championship-caliber teams often start before the school year begins in August, he said, “but we didn’t start until October. None of us knew what the project was and how to focus on it. We were just having fun in the beginning, doing the exercises and talking about
engineering. Then we realized, ‘Oh, shoot, we gotta get goin’.'”

What’s most fun about the experience, he said, “is the kids. Clearly, they love it. This is a great school. Some people hear about the Pontiac public schools and may not have the highest regard for them, but this is a unique school here to say the least.”

O’Donnell received a bachelor’s degree in manufacturing engineering in 1996 from what was then called the General Motors Institute. He returned for a master’s degree in operations management for what by then was called Kettering University, which he received in 2003.

And he said he plans to continue mentoring next year.

“We will try to structure this better next year,” O’Donnell said. “We’ve got sixth graders and they’re already talking about doing it next year. We’ve promised the kids we’ll be better at doing this next year.”

The photos above and below show US Farathane engineers helping ITA students with their Future City projects.

For information on how you can become a Future City mentor or judge, visit http://ww2.esd.org/EVENTS/FutureCity.htm.