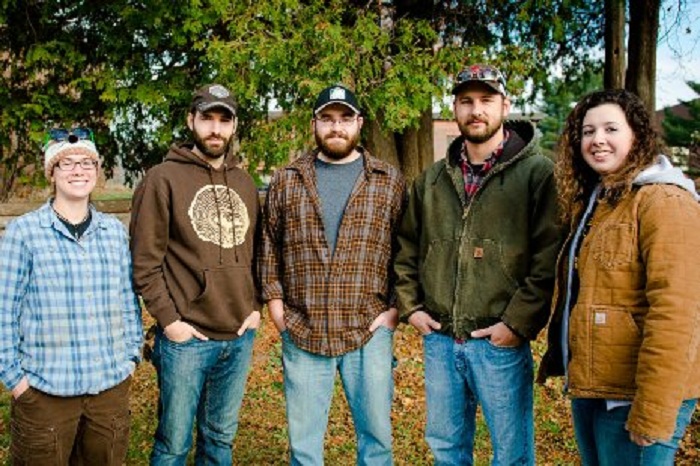 HOUGHTON — Forestry terminology is no walk in the park. It’s full of taxonomy, long Latin names — it deserves its own dictionary. The Society of American Foresters gets this — and requires its student chapter officers to compete in an annual QuizBowl at their meeting. This year, the Michigan Technological University team took first place in the national competition.

The students, all studying in the School of Forest Resources and Environmental Science, are officers of the Student Chapter of SAF at Michigan Tech. The winning team members are Kaydi Picard, Mary Wachuta, Trevor St. John and Mitchell Beach; Devin Kohn was the team alternate.

The final quesiton tie-breaker that won the Michigan Tech team the SAF National QuizBowl was, “What is the regeneration method that cuts most trees, but leaves enough to provide shade for the next crop?”

The word “shade” is what gave the answer away for Picard: Shelterwood, she says. The answer broke a tie with Iowa State University for the winning answer.

To remember terms like shelterwood, Biltmore stick, decussate and allelopathy, Picard says the team made more than 500 flashcards using 15 pages of study questions provided by SAF. Additionally, each team member picked a section of John A. Helm’s “The Dictionary of Forestry” and pored over each word.

Picard, who studied the definitions of everything between “radial arm saw” and “zygote,” says the team’s success came from their determined studying.

“Studying for the QuizBowl was like a big review of all our classes,” says Kohn, the team alternate. He adds that the questions could be very specific. For example, in forestry the harvest terms “selection,” which refers to a technique focused on tree regeneration, means something entirely different than “selective,” which implies partial cutting, with no particular emphasis on regeneration.

One of two questions the team got wrong was, “What is the conversion ratio between hectares and acres?” They contend that their answer, 2.48, was closer than the other team’s answer of 2.5 — the actual ratio is 2.47.

Answers like this definitely require memorization as each team races to buzz in first within 10 seconds. Once a team member has buzzed in and beat the other team, they only have 20 seconds to determine their answer. No pondering or Jeopardy music here.

Beach, the SAF Student Chapter President who covered “damping-off” through “isotach,” says the process could be nerve-wracking, especially since the team could lose points. Each correct answer is worth five points, and each incorrect answer takes away five points.

The nerves were worth it, though.

“We got to meet a ton of people,” said Wachuta, who memorized “jaggies” through “quiescent center” in the dictionary. “There were professors and professionals from all over, and we got to meet them on a personal, informal basis.”

St. John, who memorized “abiotic” through “cytoplasmic inheritance,” adds that not only did the team get to meet some of their research heroes, but they got treated like champions. “Everyone wanted to meet us,” he said, “and it was exciting to have people go out of their way to stop by and chat with us.”

“The key to their success was that they spent a lot of time studying the material and practicing for the event by simulating the environment under which they would compete,” Sharik said. “It helps that they are also very good students.”

And now they have a trophy to show for it.