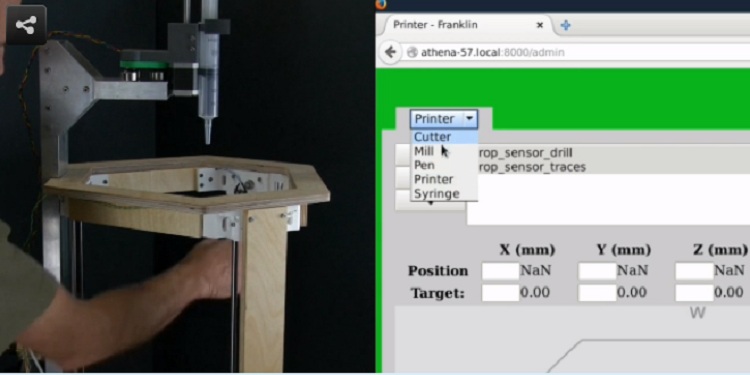 HOUGHTON — An entrepreneurial trio from Michigan’s Upper Peninsula has launched a new company to market a more flexible version of a 3D printer.

The people behind Phidias LLC have dubbed their new machine the “Athena, the Personal Manufacturing Robot.” (In Greek mythology, Athena was goddess of wisdom, mathematics, and arts and crafts, among other things.)

“Our goal was to maximize the use of the motion control systems that 3D printers use,” said Anzalone, a research scientist at Michigan Technological University in Houghton. “In my estimation, a 3D printer is not a very well utilized robot, and our goal is to make a robot that is much more flexible and useful. We’ve dubbed it the Personal Manufacturing Robot to draw that distinction from a 3D printer.”

What makes the Athena different from 3D printers?

“For one thing, it moves really fluidly in all three axes,” Anzalone said. “There’s a shot on the video where we’re putting frosting on a cupcake. The other thing is, the end is flexible, so we can pop a mill spindle off and put a syringe pump on it to work with pastes. If you wanted to print with peanut butter or frosting, you can. If you’re gearheads like us, we’ve printed with things like latex caulk and silicone sealant from the hardware store. And we’ve also demonstrated we can mill soft materials like woods, plastics, and even aluminum.”

The applications of Athena include a wide variety of manufacturing processes, including making printed circuit boards, 3-D printing with plastics, pastes and foodstuffs and cutting vinyl.

“It’s really exciting to see what’s possible with Athena,” said Bas Wijnen, Phidias co-founder and a PhD student in materials science at Michigan Tech. “When people see what it can do, they start thinking about what else they might do with it.”

Most consumer 3D printers work by laying down thin layers of hot plastic on top of each other, with the new layer partially melting and binding with the layer below it. The part that moves around depositing the plastic is very light weight, so 3-D printers are usually designed to move only that sort of tool. They typically cannot move heavier tools, like spindles used for milling printed circuit boards, or pumps used to dispense pastes and food stuffs.

Athena, however, handles both light and heavy tools. It can be transformed from a conventional 3D printer to a printed circuit board mill or a paste printer in less than a minute. Magnetic joints are used to connect many of the moving parts together and to secure different tools to perform a variety of tasks. Completely new software was developed to capitalize on this unprecedented flexibility.

Anzalone said the third co-founder of Phidias is Mark Bonenfant, industrial arts teacher at Calumet High School. He said manufacturing of the robots currently takes place in the founders’ homes, with Bonenfant in charge of wood fabrication and Anzalone in charge of 3D printing machinery.

Anzalone said Athena is a spinoff of a company he founded more than a year ago called 3D4EDU, which has built about 120 3D printers for teachers for classroom use. “Now we’ve started a retail business and expanded the capabilities of the machine,” Anzalone said.

To view a video of Athena in action, visit this link.

Learn more about the company on this Facebook page.

The company has also launched an Indiegogo fundraising campaign with a $150,000 goal. It’s available at this link.

And in case you’re wondering, Phidias was a Greek sculptor who lived from 480 to 430 BC. According to Wikipedia, Phidias’ statue of Zeus at Olympia was one of the Seven Wonders of the Ancient World. He also designed the statues of Athena on the Acropolis in Athens.