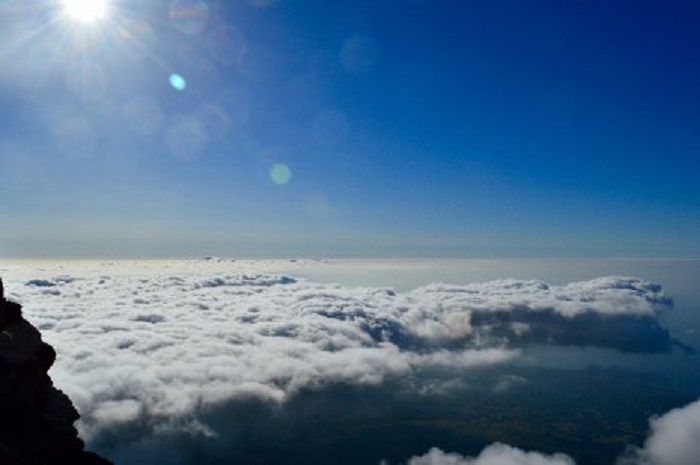 HOUGHTON — Air is not just air. It’s not just a sterile, preset
mix of oxygen, hydrogen, carbon dioxide and other
molecules. As an atmospheric chemist, Lynn Mazzoleni
knows air is dynamic and full of soot, sulfates, dust and other
particles. Now, with a new piece of equipment, she can
analyze complex aerosol samples and how their chemistry
affects cloud formation.

Mazzoleni is an associate professor of chemistry at Michigan
Technological University and a recent Fulbright Scholar
awardee. She is also the lead researcher on a team that is
bringing a high-resolution mass spectrometer to campus
through a Major Research Instrumentation grant from the
National Science Foundation. The instrument is an analytical
chemistry tool that identifies the type and amount of
chemicals in a mixture.

“This will support various environmental and health studies
involving very complex mixtures,” Mazzoleni said, adding that
her team plans to study everything from atmospheric aerosols
to wastewater, infant tears to porewater in peat.

The instrument cost $771,558, and the NSF provided 70 percent of the cost. The other 30 percent was a match from Michigan Tech that is required under the grant program.

The instrument will be an Orbitrap Elite mass spectrometer
with sufficiently high scan rates. The scan rates matter,
Mazzoleni says, because getting structural and quantitative
data for trace components in complex samples is an
intensified version of The Princess and The Pea. Quantitative
measurements for such delicate and small molecules require
fast chromatography, which is the separation and analysis of
mixtures, and minuscule mass measurements in femtograms,
or 0.000000000000001 grams.

Right now, Mazzoleni must travel to the Woods Hole
Oceanographic Institution in Massachusetts to run her
samples through high-resolution mass spectrometry tests; it’s
the only lab that can currently handle her environmental
samples. Many biomedical labs have similar equipment, but
often these are set up for larger molecules. Even without
limited access, the closest facility is six hours south of
Michigan Tech. The availability of the Orbitrap Elite on campus
will open up new possibilities for a number of researchers,
especially those conducting environmental analyses.

Delving into such complexity requires a large team. In addition
to Mazzoleni, the project’s co-investigators include Evan Kane
from the School of Forest Resources and Environmental
Sciences, Adrienne Minerick, associate dean for research
and innovation in the College of Engineering and professor of
chemical engineering, and Daisuke Minakata, assistant
professor of civil and environmental engineering.

The instrument will be located in Michigan Tech’s Great Lakes
Research Center, part of its new Microanalytical Facility, a
core facility specializing in mass spectrometry equipment.
The initiative, and the new Orbitrap Elite instrument, are
supported by more than ten institutes and departments
across campus.

“This project is a model of the deeply interdisciplinary
collaboration that not only characterizes the nature of
contemporary science, but which also marks many of the
most exciting research activities now underway at Michigan
Tech,” says Bruce Seely, dean of the College of Sciences
and Arts, adding that Mazzoleni’s efforts to obtain the
equipment span more than three years. “This is also a great
example of how persistence and determination in the pursuit
of external support can pay off for the researchers and the
campus at large. I congratulate her and the team for their
efforts.”

The new equipment also opens doors for students. Annie
Putman, a Michigan Tech alumna and current doctoral student
at the University of Utah, says her experiences working with
Mazzoleni developed her research skills, which have helped
her succeed in graduate school.

“The ease of access to measurement lowers barriers to
students proposing and completing projects of their own
design,” she said, reflecting that her own process involved
traveling across the country. Currently Mazzoleni shows
videos in class to explain how high-resolution mass spec
equipment works.

“Now, students will be able to walk up and see this instrument
in action, which is so much better than watching a video on the
Internet,” she said. “Having the machine will not only make us more competitive, but actually give us the opportunity to lead new avenues of research in our respective fields.”

One of Massoleni’s field sites is pictured above — high on
Pico Mountain in the Azores.