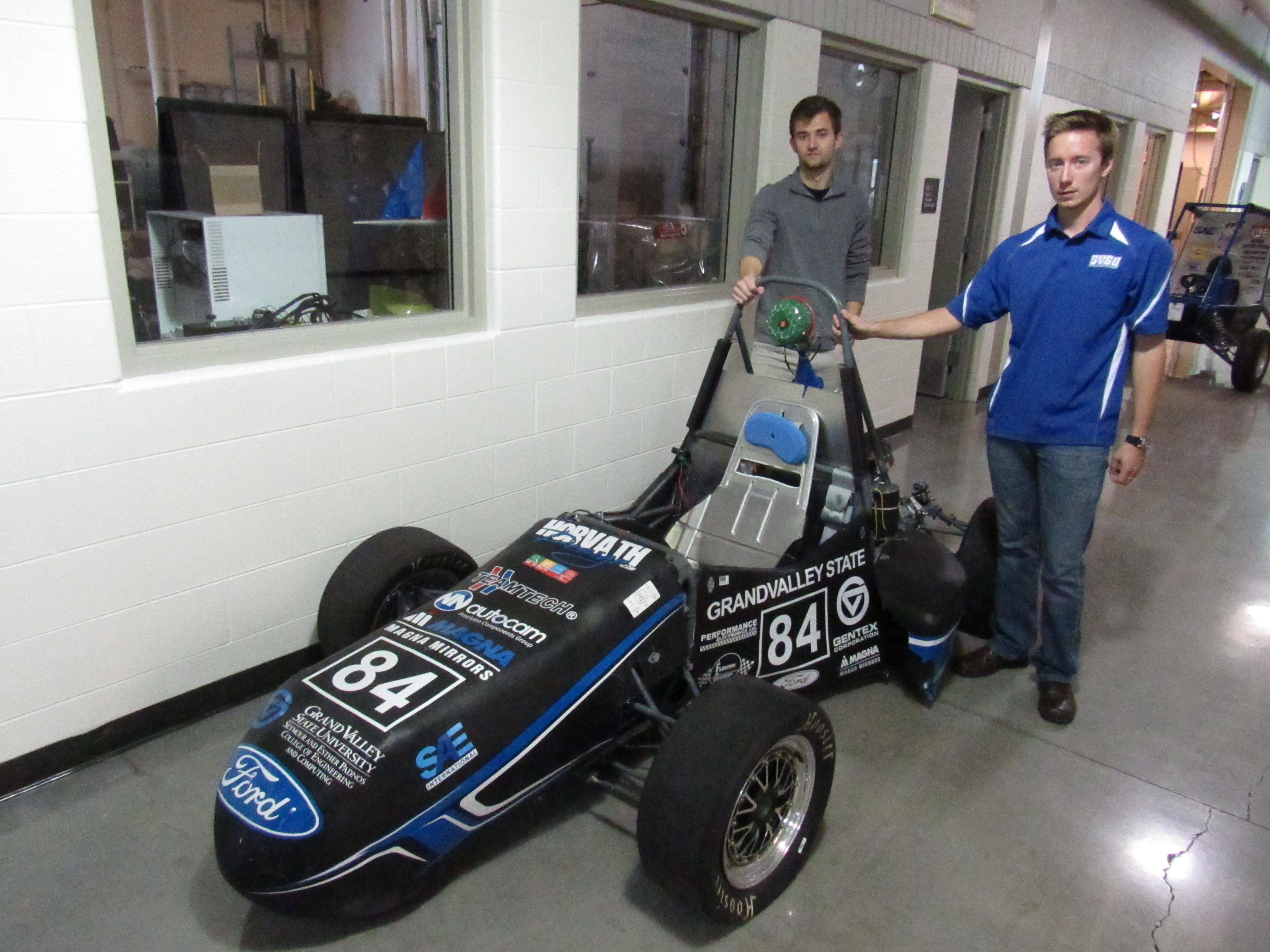 GRAND RAPIDS — When it comes to a shortage of STEM
workers, Grand Valley State University’s man in charge says
the university is “working the problem aggressively,” according to the school’s engineering dean.

The number of engineering undergraduates at Grand Valley
has jumped from 815 to 1,192 just since 2012, said Paul
Plotkowski, dean of the university’s Padnos College of
Engineering and Computing.

“There are challenges that go with that,” he said Wednesday,
on Day Six of The Engineering Society of Detroit’s 2015 Fall
Tech Tour, sponsored by Michigan Technological University.

“The other side of the house that people are screaming for is
computer science,” Plotkowski said. Here too, Grand Valley
enrollment is growing rapidly, up more than 20 percent in a
single year, from 590 last year to 713 this year.

The university’s product design and manufacturing
engineering graduates are going to work in basically all
sectors related to manufacturing, from automotive to furniture
to health care. The school has also added a minor and a
master’s degree program in biomedical engineering whose
graduates are being snapped up by the rapidly growing health
care economy.

“The combination of a mechanical, electrical or product
design major with the biomedical minor gives them
fundamental engineering expertise and application area
expertise to be really successful,” Plotkowski said.

In terms of new programs, Grand Valley is introducing an
Applied Medical Devices Institute, housed in the university’s
Center for Health Sciences, part of the “Medical Mile” along
East Michigan Avenue that also includes expanded hospitals
and Michigan State University’s medical school. There,
students are working on projects like robotic surgery devices,
enhancements to heart assist pumps, and more.

Plotkowski said Grand Valley’s 51,800-square-foot Kennedy
Hall of Engineering, which just opened in 2007, is full to
overflowing. While recent improvements have been added —
including upgrading lab and classroom space, a VPN to allow
student access to university software anywhere, and more
hardware and connectivity throughout — “We are having
discussions about physical expansion,” Plotkowski said.

He said the engineering program is also moving rapidly into
the maker movement and 3D printing — and co-hosted a Maker
Faire over Labor Day weekend with the Grand Rapids Public Museum.

Next, I had a chance to do one of my most favorite activities
on Tech Tours — meet with students. They were all juniors in the Product Design and Manufacturing Engineering program, and they were all working on amazing projects, like f’rinstance…

* Taylor Sims of Grand Rapids, working on an improved
urinary collection device for women with mobility issues,
replacing the dreaded Foley catheter.
* Alissa Smith of Coldwater, Michelle Kern of Muskgeon and
James Sharp of Mattawan, who are working on an oral
controller that will allow a child with cerebral palsy to control a
wheelchair using only his tongue. The effort is funded by a
National Science Foundation grant.
* Zach Blett of Plainwell, who’s working on an in-home IV
infusion pump that makes self-administration of medicine
much easier for patients.
* Ben Vander Wal of Zeeland and Bryce Fowler of Grand
Rapids, who are working on a pedometer for traumatic brain
injury patients to reduce falls from instances of medical
fascination, where the patients get distracted and literally
forget they’re walking. The pedometer will record when
patients’ steps get too short and rapid, and give them
feedback — a noise or vibration — to get them back on track.
They’re working with a neurological disorder expert.
* Justin Dykstra of Hudsonville, working with two other
students and Spectrum Health on an in-bed exercise device
for patients recovering from hip or knee surgery. The device
will allow them to exercise in bed safely to improve strength.
* Ryan Haefner of Farmington Hills, who’s working with
National Nail Corp. on an improved underlayment installer for
the roofing industry.

I wished these students luck, but I’m pretty sure they won’t
need it.

Next up was Chris Plouff, James R. Sebastian Chair of the School of
Engineering, a unique position that’s half instruction and
curriculum development and half teaching. (Although he’s not
teaching now because he has other interim administrative
duties as interim director of the school.) Plouff has been with the university since 1997, starting with 10 years in the career center, the last five as its director. He has undergrad and master’s degrees in environmental engineering from Michigan Tech and an Ed.D. in education from Eastern Michigan.

Plouff runs Grand Valley’s co-op program for engineering
students — an important job, since Grand Valley is one of only
a handful of institutions that require co-ops for graduation.
(Interestingly two of the others are also in Michigan —
Kettering University and the University of Detroit Mercy.)

Grand Valley starts its co-ops after sophomore year. Students
spend the summer between sophomore and junior years with
their co-op employers, then do fall semester junior year back
on campus. Spring semester junior year, they’re back at co-op
— then they have to go to summer school on campus. Senior
year, they’re back at co-op fall semester, then back on
campus for spring and summer semesters senior year, graduating in early August.

Grand Valley co-op students are working as far away as
Germany and France, and throughout the United States. The
experience gives them a firm grounding in what it takes to do
engineering on the job, not just in the classroom.

Rhodes is quick to tell you what biomedical engineering is
not: “It’s not changing seeds. It’s not agricultural. It’s not
genetics. It’s not tissue engineering. The way we do biomed
is very much medical devices. We have classes in things like
bioelectric potential — we have devices that take signals from
people and those signals are used to drive treatment
decisions, devices, monitors.”

Grand Valley started its minor program with the arrival of the
MSU medical school and sharp growth in West Michigan
medical device makers. A master’s program was added in
2010 through an NSF grant of $699,997 (oh, for heaven’s
sake, Washington, here’s $3, let’s make it an even number).
The idea was to retrain engineers from industries that were
shedding jobs — like the auto industry was in 2008 and 2009.
Currently, the program has 60 undergraduate students in the
minor and 11 graduate students. Rhodes said she’s hoping to
add a bachelor’s degree program soon.

Those students work on prosthetics, materials for implants,
the design of implants, sensors and more. One recent project
with Spectrum Health involved designing a device for heart
patients hooked up to a left ventricular assist device so they
could exercise.

“The hospital wanted to keep these people waiting for a heart
transplant active, for the cardiovascular benefit, but they are
significantly limited in mobility because of all the tubes coming
out of them,” Rhodes said. “We developed a vest to hold the
tubes in place while they exercise, and Spectrum took it and
ran with it.”

Rhodes also introduced me to a couple of her terrific
graduate students, like Kevin Weaver of Grand Rapids.
Among other things, he’s using signal processing techniques
to study the effects of ultrasound to promote healing in
bones, and working with the Van Andel Institute to test the
strength of bones in mice with osteoarthritis. He also showed
me a breathing test device that he’s adapted with gaming
techniques to encourage patient compliance.

My final visit of the day was with Grand Valley’s nascent
Formula SAE racing team, which competed in its first race
last year.

Operations manager Greg Quante of Rochester and driver
Garrett Pelowski of Farmington Hills showed me last year’s
car, which did pretty well for a first-year term, passing all the
tech inspections, completed the autocross course, but
suffered crippling flat tires before it could compete in the
endurance race.

“It rained, and we couldn’t get the rain tires to seal on our
wheels,” Quante said. “This year, we will have rain tires
already mounted on rims. It was mostly a question of cost last
year.”

The 590-pound Grand Valley Formula SAE car is powered by
a 600-cc four-stroke motorcycle engine. Its brakes are also
off a motorcycle, while its shocks come from a mountain bike.

Some of those parts will be scavenged for this year’s car, the
two students said, but there will be a completely different
design, for one very good reason — one of Grand Valley’s
team members this year is a paraplegic who races
snowmobiles, and they want the car to be barrier-free so he
can be one of the drivers. They also aim to remove a great
deal of weight from this year’s car.

The team plans to race at Michigan International Speedway in
Brooklyn in May and to compete in another SAE race in
Nebraska in June.

And so ended my fifth university visit on this year’s Tech Tour,
and once again, I was impressed. For a school that barely
offered engineering when I was a whippersnapper, Grand
Valley has quickly built a fine program that’s very much in tune
with the West Michigan economy and its huge need for
engineers.

Next up on the Tech Tour, sponsored by Michigan
Technological University, is a ride down US-131 to Western
Michigan University. Let’s see what those Broncos have in
store!