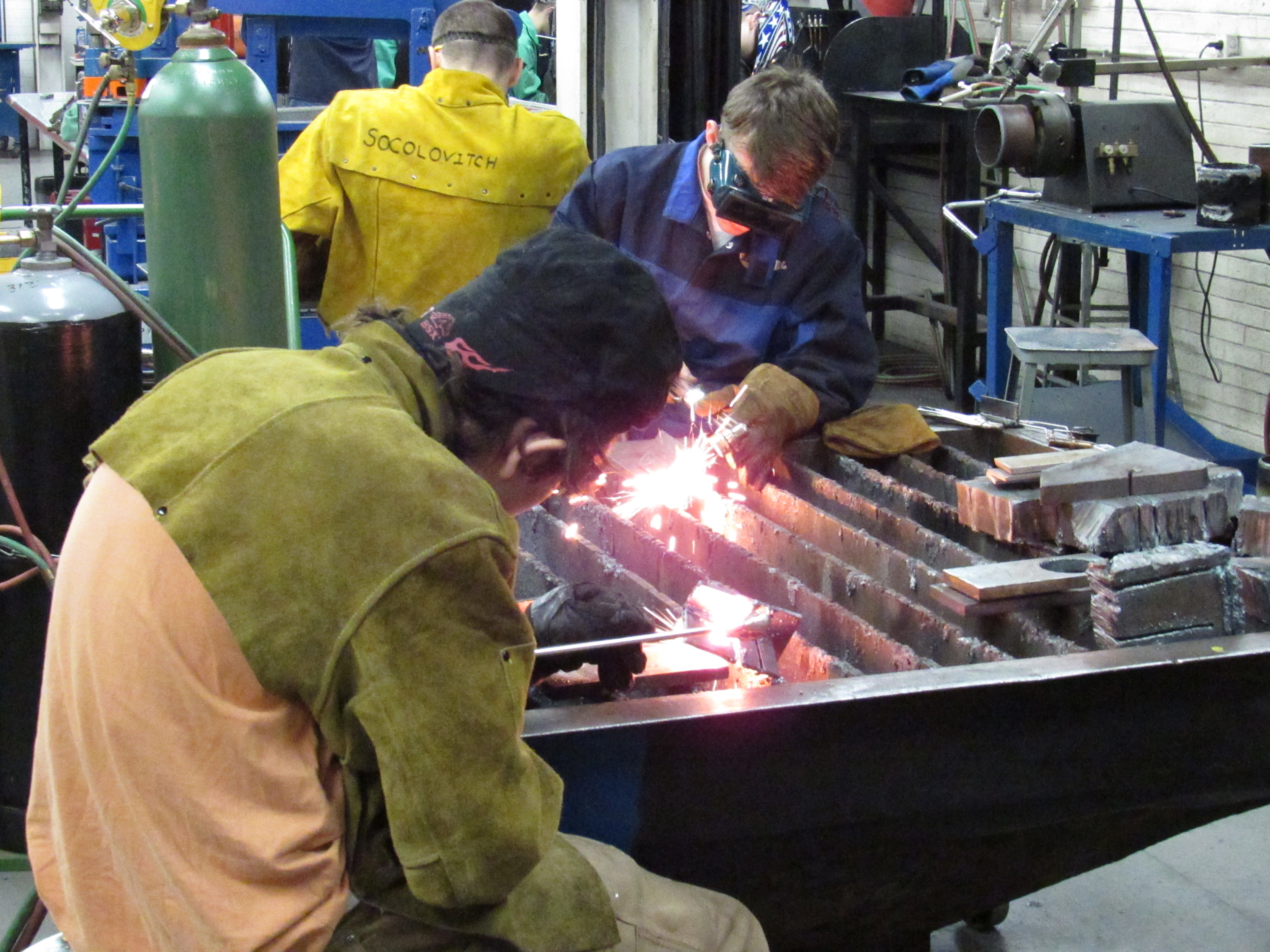 BIG RAPIDS — There are some universities that give off a
vibe of overwhelming practicality, a serious sense of purpose.
Very few people are there to find themselves. They are there
to find a better life for themselves and their families.

Ferris State University, at the edge of Up North and the
Manistee National Forest, not quite an hour north of Grand
Rapids, is a place like that. Which is why I’ve always looked
forward to visits here. And Tuesday’s visit — on Day Five of
The Engineering Society of Detroit 2015 Fall Tech Tour,
sponsored by Michigan Technological University — was no
exception.

How popular? Try a one- to two-year waiting list to get into the
program. And the reason is that industry is snapping up Ferris
State’s graduates, in both its two-year associate in applied
science in welding technology program, and its four-year
welding technology bachelor of science, as fast as Ferris
State can turn them out.

“There is a shortage of bodies across the welding industry,
welders, welding technicians and welding engineers,”
Hardesty said.

He said graduates in the Ferris State associate’s program will
likely go to work as a welding supervisor or robot
programmer. “They get very strong, sound welding skills, and
add skills in inspection, automation, fabrication, that every
welder doesn’t have,” Hardesty said. Starting salaries are
$40,000 and up.

The four-year degree recipients, meanwhile, go to work at
automakers and other manufacturers as a project engineer,
aside to a product or vehicle to work with product designers to
make sure the product in question can be welded practically
at a suitable volume. Welding engineers also work with other
engineers ot build assembly lines, or may work at engineering
consulting companies. Starting salaries here are $60,000 and
up.

After they spend a year on the basics of welding, students
move on to more advanced technologies like running welding
robots. Hardesty said current technology allows welders to
“go from art to part.”

There are about 200 people in Ferris State’s welding program
— which is capacity. “Given the size of our facility and the size
of our faculty we just can’t handle any more,” Hardesty said.

That’s why Ferris State is seeking state funding to more than
double the size of its welding technology space in the Swan
Building and Swan Building Annex to 30,000 square feet,
which would allow it to almost double its class sizes.

Ferris State’s welding program is very active in the
community, hosting an annual high school welding competition
that draws 150 students, and building a 25-foot-tall metal
gazebo for a Big Rapids park. The program also teaches
students how to use X-ray and ultrasound equipment to test
welds.

Next, it was a quick trip over to Ferris State’s Granger Center
for Construction and HVACR, home to many of its academic construction programs.

My first interview there was with Doug Zentz, HVAC program
coordinator, who runs a program that trains about 230
students in the latest technologies in heating, ventilation, air
conditioning and refrigeration.

Zentz joined the program in 2003 after 23 years in the HVAC
industry, including two stints at furnace and air conditioner
manufacturer Trane. Zentz has a bachelor’s degree in
mechanical engineering from Purdue University and a
master’s degree in career and technical education from Ferris
State.

“I love what I do,” Zentz said. “I love the ability to teach the
young who don’t know anything and get those ‘Oh, I got it’
moments. It’s hard to put a price on that.”

Zentz said technology is having a big effect on HVAC just as it
is everything else, with computer-aided design making
systems much less “field engineered” — assembled at the job
site — and much more plug-and-play.

And, he said, the real emphasis on HVAC these days is
energy efficiency.

Like many of Ferris State’s engineering programs, there is an
associate’s degree available. Ferris’ associates in HVACR
started in 1945, in response to widespread adoption of
refrigerators in American homes, and commercial buildings’
adoption of early forms of air conditioning. The bachelor’s
degree was added in the 1970s, after the first oil shock, as a
bachelor’s in energy management. Today, it’s called a
bachelor’s in HVACR and building energy management.

“The art of building sciences is booming right now for a
couple of basic reasons,” Zentz said. “If you stop and think
about resources, energy, and our environment … buildings
consume twice the energy of all forms of transportation put
together globally. In the U.S. it’s actually a little higher than
that. The other thing is the environment. Buildings indirectly or
directly cause more harm to the environment than all forms of
transportation. So the need of society to make buildings
smarter is greater than ever. We’ve been working on making
transportation more energy-efficient for 30 years now. We’ve
been working on industry for 30 years. What we haven’t done
yet is figure out how ot make buildings smarter. And now, a lot
of smart people are starting to realize this.”

Zentz said government regulations requiring more energy
efficient buildings are in the works, and could result in huge
national energy savings — and huge career opportunities for
the kind of building energy experts that Ferris State is turning
out.

Ferris State students are participating in that effort. Zentz said
Ferris students conducted an energy audit at a major public
building in downtown Grand Rapids and found $750,000 a
year in energy savings.

How big will the Ferris State HVACR program get? We could
double the size of our program,” Zentz said. “The hardest part
would be finding enough competent, professional
professors.”

Students with the four-year degree, Miller said, can go in
dozens of directions — all of them hiring, all of them lucrative.
She said students in the program work for construction
managers, general contractors and specialty subcontractors,
or may go to work as an owner’s representative for anything
from a major university to a health care system.

“I came here to get people fired up about construction,” Miller
said. “I didn’t even know it was a career until I went into
architecture. People don’t realize it really does take a degree.
There’s a lot that goes into being a construction manger.
People who get our degree aren’t swinging a hammer. It’s
people skills, management, science and engineering… You
have to know a little bit about every trade that’s out there.”

The program now has 253 students enrolled, still below its
2008 peak, meaning the program is still recovering from the
2007-09 recession.

But she said construction is now roaring back, with an
increasing emphasis on high-tech design and energy
efficiency. “We’re doing a curriculum revision right now with a
heavier emphasis on mechanical and electrical knowledge,”
she said. And the use of more design software, she said,
“promotes prefabrication, which gives you better quality
control. It’s always better to fabricate in a controlled
environment than on a job site where it’s freezing cold and
you’re using generator power.” And, she said, the emphasis also makes it easier to find problems in construction documents before field work starts.

And after a greeting and conversation with John R. Schmidt,
professor and director of Ferris State’s School of Built
Environment, that’s where my morning-plus at Ferris State
ended, amid smart kids who know just where they’re going,
and the industry-savvy professors who will help them get
there. It’s a worthy stop on any Tech Tour.