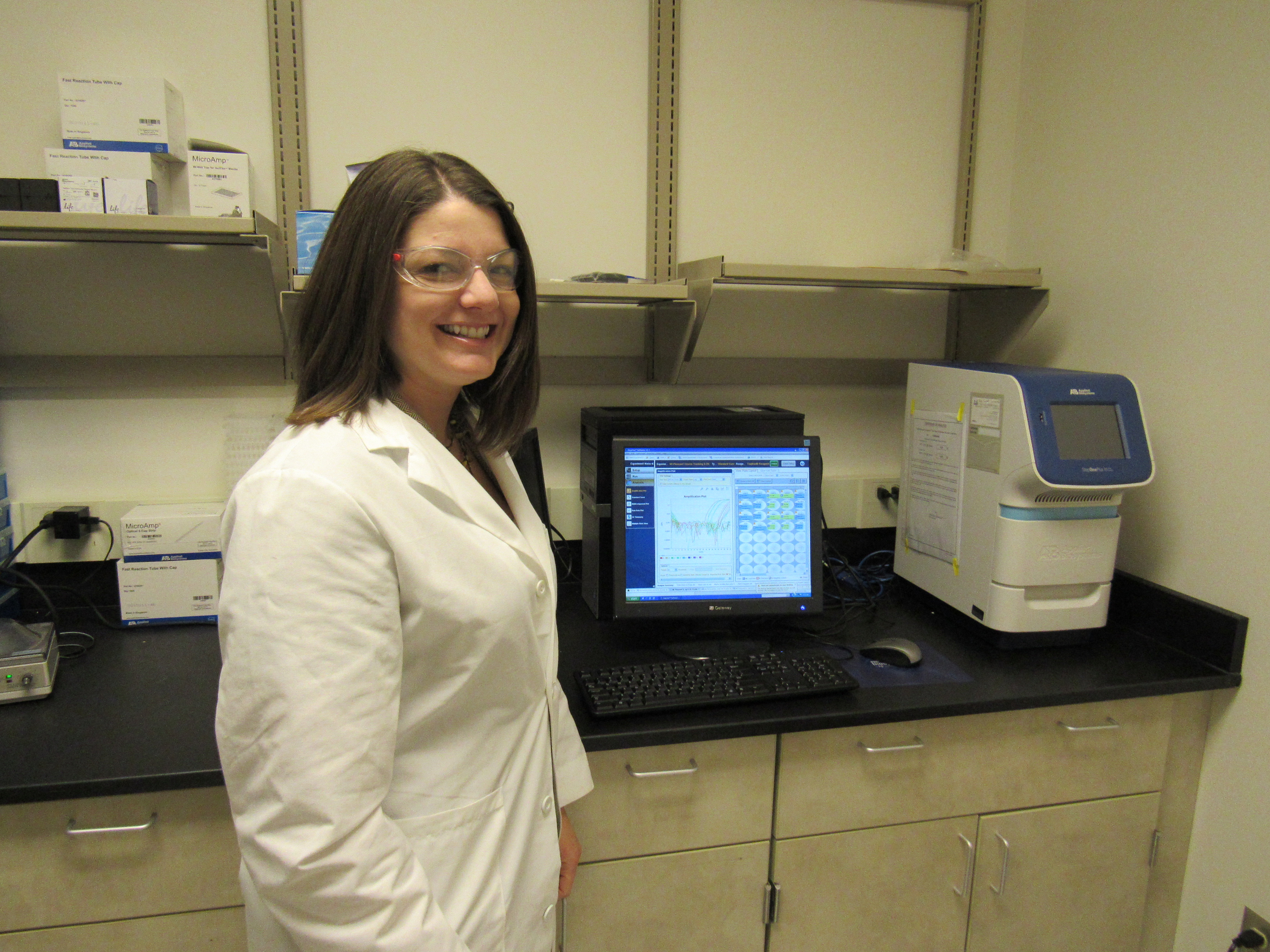 So it was a natural to kick off the second week of the 2015 Engineering Society of Detroit Fall Tech Tour, sponsored by Michigan Technological University.

Saginaw Valley, a 10,000-student community university on the prairies between Saginaw, Bay City and Midland, has received about $8 million in recent years, through a combination of private grants from area foundations and corporations, for STEM activities in the Great Lakes Bay region.

Hence, the job of Executive Director of STEM at SVSU, now held by Carolyn Wierda, beginning her sixth year with Saginaw Valley after a 34-year career in public education that ended as superintendent of the Bay City schools.

Saginaw Valley launched a new STEM@SVSU initiative in January to tie together those $8 million in grants.

“My role is to pull together the efforts under one umbrella, and almost all of the efforts have a key component of reach-out to K-12 education,” Wierda said.

* The Dow Corning SVSU STEM Partnership, a two-week summer institute for high school students and teachers. The teachers propose projects for scientific study, and they’re paired with a Saginaw Valley professor. The teachers and students spend a week on campus in June and another week in August, and come out of the program with a science or engineering unit that they’ll include in their classroom instruction the following year. In May, the teachers and students show their work at a symposium.

* An engineering talent development grant from Consumers Energy, under which high-achieving high school students come to campus on Thursday nights to take an introductory engineering class.

* Several projects funded by the Herbert H. and Grace A. Dow Foundation projects. Included are themed weeklong STEM summer camps for high school students, in which they’re exposed to robotics, science, physics, chemistry, and high level mathematics; a STEM Opportunity Camp for Bay City and Saginaw public school students who need help with math; and undergraduate research grants, which give SVSU faculty funding to pay undergraduates to do research. About 80 percent of projects under the program are STEM related.

* The Dow Science and Sustainability Education Center, summer research that involves college interns, high school teachers and high school students. All of the research is around the Great Lakes Bay watershed and environmental issues. Under the program, faculty proposes research, and a call goes out to high school teachers and students who would like to be involved. Projects have included research into the genetic diversity of walleye, soil conservation techniques, surface water analysis, and more. The program had 70 applicants last year for 22 research positions.

Saginaw Valley will also soon take delivery of a mobile environmental science laboratory — a large truck full of lab equipment that will be sent to area school districts and community events.

The Great Lakes Bay Alliance also applied to an effort called STEM Ecosystems sponsored by the Clinton Global Initiative. It was one of just 10 out of 70 applying communities that have been chosen for the program — which kicks off with a Nov. 12 meeting at the White House. Wierda will be there.

Wierda credited Saginaw Valley administration for the vision leading to the school’s long list of STEM initiatives. The meeting left me feeling a lot better about the future of the STEM pipeline in this part of the world. There may still be a skilled worker shortage around here in 2030, but you can’t say they haven’t tried like crazy to address it.

Next, I met with the folks running some of Saginaw Valley’s groundbreaking research, starting with Tami L. Sivy, associate professor of chemistry.

This West Michigan native and Calvin College graduate, who later earned her Ph.D. in biochemistry at the University of Colorado in Boulder, is in her eighth year at Saginaw Valley.

Sivy is working with the state Department of Environmental Quality and the U.S. Environmental Protection Agency on a faster, more accurate way to determine that crucial issue of Michigan summertime — whether the beach is safe to swim at, or whether the water is loaded with bacteria that comes from places you don’t really want to know.

Sivy is working on a method that determines whether or not the water is contaminated with E. coli through DNA detection. That can give you a result within hours, rather than overnight, like current methods, which use culture methods.

The method still isn’t in widespread use because of cost and training required, but Sivy said she’s hoping it will be soon. “Our role has been to support the health departments and expand our testing, do comparison testing with traditional methods to determine new guidelines for beach closings,” Sivy said. She’ll present on the new technology at next week’s conference of the Great Lakes Beach Association in Traverse City, where 300 people are expected.

Sivy is also working on new research methods that can determine through slight differences in DNA what the source of microbial contamination is in water — whether from human waste or farm animal waste, for instance.

Sivy said undergrads have been heavily involved in her research under the Dow Science and Sustainability initiative and other avenues, such as the Saginaw Bay Environmental Sciences Institute at SVSU.

Overall, Sivy said, Michigan is doing a pretty good job of maintaining the Great Lakes’ water quality — but a major problem remains in invasive species, from zebra and quagga mussels to phragmites to Asian carp.

Next up was a visit with Rajani Muraleedharan, assistant professor of electrical and computer engineering, about her work on sensor networks for the space program and other applications.

Muraleedharan has been working on a networked swarm of drones that could be used to explore the surface of Saturn’s moon Titan, where there is enough of an atmosphere to make drone helicopters work. The work is funded by the Michigan Space Grant Consortium, a network of 11 Michigan colleges and universities that is part of a national network of universities with advanced space research capabilities.

She said drones in the swarm will explore a simulated environment in a Saginaw Valley lab and report back to a “supernode” supervisor for data analysis. The techniques are important for autonomous space exploration in distant parts of the solar system, where direct control is impossible because it takes hours for radio signals to get back and forth to Earth.

Another project involves computer programs that can detect the emotions of autistic children, using facial and voice markers. The technique is being developed for more effective communication between and among autistic people.

And, Muraleedharan is working on research with a physics Professor, Dr. Christopher Nakamura and a psychology professor, Dr.Marie Cassar to enhance physics education by analyzing students’ dichotomous response and logical reasoning. The experiments are intended to show whether adding pictures and other supplementary material improves understanding of physics concepts.

As if that weren’t enough? She’s mentoring ECE capstone projects with Covenant Health Care on fall prevention for hospital patients, and with a fire equipment company on an improved flashlight.

Muraleedharan is also leading the formation of a chapter of the Society of Women Engineers on the Saginaw Valley campus. She said it’s drawing women from other technical fields as well.

Next up it was an old friend from several Saginaw Valley visits, Bruce Hart, who runs the university’s Independent Testing Lab.

This lab does advanced testing of advanced materials from the Great Lakes Bay area’s many chemical-related companies. Yes, Dow Chemical and Dow Corning, but also ones you’ve probably never heard of and would have a hard time pronouncing, like Gougeon Brothers Inc. in Bay City.

Gougeon’s West System and Pro-Set marine epoxies are known around the world (including the America’s Cup races). Their advanced materials help give an edge to the Saginaw Valley Formula SAE racing team. Now, they’re expanding their epoxy line into the surfboard business. All of their materials are tested at Saginaw Valley.

Hart’s lab has also graduated a company — Covaron Advanced Materials, which is working on new formulations of ceramics that the company says have sustainable applications in a wide variety of energy and industrial applications. The major advantage is a far lower production temperature than most ceramics. The company leased space in the lab until its recent move to Ann Arbor.

My morning at Saginaw Valley ended with a visit with Frank R. Hall, dean of the College of Science, Engineering and Technology. Hall joined Saginaw Valley July 1 after serving as a professor and dean at Worcester State University in Massachusetts. He was also has been a visiting scholar at Worcester Polytechnic Institute.

Earlier, Hall held a variety of academic, government and public policy appointments. After eight years on the faculty at the University of New Orleans, he joined the Ocean Studies Board of the National Academies of Science in Washington, D.C. in 2006. That was followed by stints with the National Oceanic and Atmospheric Administration and the Center for Environment, Commerce and Energy.

Hall currently serves the United Nations Oceans Assessment Program as a consulting expert. He also has been serving on Massachusetts’ STEM Advisory Council. For his professional activities, Hall was nominated as an Outstanding African-American in STEM for the Black Engineers of the Year Awards in 2014.

Hall said that early in his SVSU career, he’s focused on boosting enrollment among women in engineering, and that the SWE chapter will help. (Female enrollment, he said, is only about 7 percent of the college’s 2,000 students.) The college has been growing thanks to strength in mechanical engineering and computer science enrollment.

For the future, Hall said he sees growth opportunities in mechatronics and computer science. The university has just hired a faculty member who has been doing a lot of work in automobile programming and software.

Thus ended my morning on the Saginaw County prairie. I was struck by one thing about Saginaw Valley, one of the schools Michigan created in its mid-’60s explosion of economic growth — I kept hearing over and over that this was a place where professors really love to teach, but they can also do important, groundbreaking research. At really big schools, professors are all about research and the actual teaching is left to graduate students. At small schools, it’s all about teaching, and there frequently aren’t resources for big expensive labs that let professors do leading-edge research. Saginaw Valley, I kept hearing, is comfortably in the middle, where both aims are accomplished. And that’s just what I saw Monday.