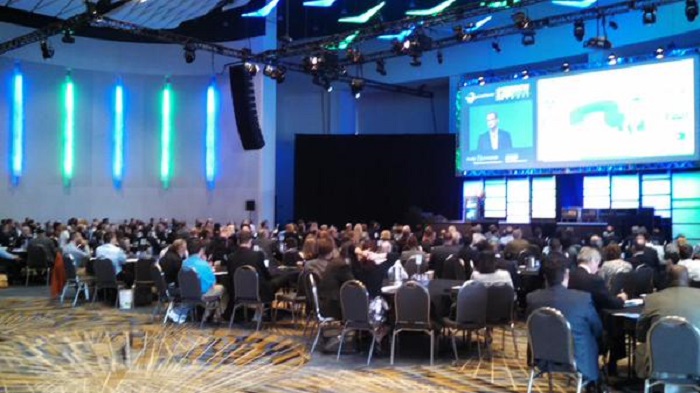 DETROIT — There’s no doubt about the high-tech future of
the auto industry, according to the 2015 MichAuto Summit,
held Wednesday at Detroit’s Cobo Center.

Production components built by 3D printers. Increasing
autonomy of cars that help the driver stay out of accidents.
Advanced powertrains involving electricity and hydrogen. All
were on the agenda before a packed house of hundreds of
attendees.

Speakers talked about cars in terms of being part of an
overall system of mobility.

Like other speakers, Mai spoke of closing the technology gap
to autonomous vehicles, and moving from an era in which
people will own cars to a future in which they will share
access.And, he said, cars will be just part of a multi-modal
mobility system that also involves short-distance public
transportation and other forms of transportation like airlines.

“With 3d printing, complexity is free,” Garrity said. “Compared
to subtractive manufacturing, designers get an incredible
amount of flexibility.”

That advanced industry is, like Michigan overall and Detroit in
particular, increasingly attractive to young people, according
to Kevin Kerrigan, senior vice president of the automotive
office at the Michigan Economic Development Corp.

“We offer a fantastic industry to work in, a high tech place to
be, coupuled with a great place to live,” Kerrigan said, adding
that those $150,000 signing bonuses offered in Silicon Valley
don’t go far where the average home now costs more than $1
million.

Other speakers said a new startup culture is also informing the auto industry in high-tech ways, with auto startups among the tech companies percolating in downtown Detroit and elsewhere in the region.

But Kirk Steudle, director of the Michigan Department of
Transportation, said Michigan continues to under-invest on
infrastructure. “Ohio invests a billion dollars more a year on
roads and bridges than we do,” Steudle said. “That’s a billion
reasons to go there” over Michigan.

Like other speakers, Harry Lightsey III, executive director,
public policy, global connected customer experience at
General Motors Co., predicted “a gradual evolution to
autonomous driving.” He said that even before self-driving
cars, increased driver assistance on the road to mobility could
save thousands of lives a year.

Peter Sweatman, Director of the University of Michigan Mobility Transformation Center and its 32-acre Mcity testbed for autonomous vehicles, spoke about the UM-led eight-year, $100 million effort to develop an autonomous, shared mobility service in Ann Arbor by 2021.

“We’re on track,” he said. “We’ve got a great response to this program.”

The track is also being used by a wide variety of automotive and IT companies to test connected and autonomous vehicle components.

Gov. Rick Snyder closed the conference by praising the state’s auto-led economic turnaround since the 2007-09 recession. He said the move toward intelligent vehicles “is one of the most exciting things going on in the world in any field” — and, he noted, it’s based in Michigan.

He also pointed to two federal institutes doing work on lightweight materials that are based in Detroit, in metals and composites.

However, Snyder said, “The greatest challenge we face is making sure we have the right people with the right skill set in the right place to drive you to business success. We have hard working people in Michigan, but we can do more to get them the right skill sets and talent,” emphasizing engineering and skilled trades. “That’s my top priority as governor, is to lead in this talent question,” Snyder said.

0 thoughts on “AutoSummit: A High-Tech Future For Michigan’s Legacy Industry”