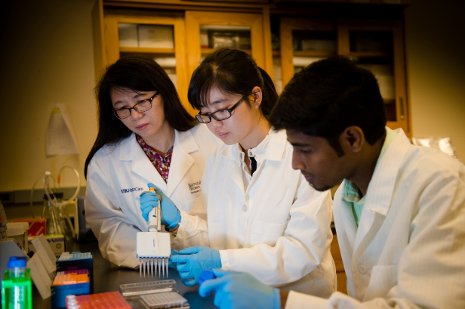 HOUGHTON — Strands of MicroRNA — small, non-coding strands of genetic material in DNA — were once thought of as useless junk. Now, researchers know that these small structures help program surrounding genes, affecting everything from eye color to cancer. For diabetes, one such connection is a classic whodunit — it was miR-483 with the SOCS3 protein in the pancreas. Unraveling this mystery is the subject of a new paper published in the Journal of Biological Chemistry.

Xiaoqing Tang, one of the study co-authors and an assistant professor of biology at Michigan Technological University, is poised. She is as calm as you’d expect a sleuth to be, and she explains the complex interactions of pancreatic microRNA with the meticulousness of a crime scene investigator.

First, Tang says, we have to start with the big picture — the pancreatic cells where these genes interact.

Balancing these hormones is difficult to coordinate because several organs — the liver and brain as well as the pancreas — are involved. But the real nuance is within the alpha and beta cells themselves.

If DNA is like a blueprint, then RNA is the ink — it serves as the messenger between the genetic code stored in DNA and the molecules that are built following the blueprint model. MicroRNA is then the paper; and like empty space in a design, it’s easy to assume that the paper doesn’t affect the blueprint.

“Before 1998, researchers just ignored the regions with microRNA,” Tang says, explaining that microRNA is non-coding, so it doesn’t carry direct genetic material, and is only tens of nucleotides long compared to DNA’s tens of thousands of nucleotides in length. “These small microRNAs can bind into functional genes, though, which alters how those genes are expressed,” she said.

Within alpha and beta cells, there are many microRNAs. Tang and her team set out to separate which microRNA could be the culprit for increased alpha cell activity and glucagon production.

Using a microRNA array in mouse models, Tang examined which strands were active in beta cells and alpha cells. Only a few stood out, and one – miR-483 – shows a clear pattern. In the array image shown below, each box is darker or lighter depending on how active a microRNA is. In alpha cells, miR-483 is light and low; in beta cells, it is dark and very active. Tang says “that means they have different functions” and, in this case, miR-483 increases insulin and inhibits glucagon.

“But it’s quite hard to figure out which microRNA plays major functions,” Tang admits. “What makes studying microRNAs so difficult is that a single microRNA could have more than one target — this one microRNA can bind to a different functional RNA, which can have a totally different effect. The key is to find the right microRNA and the right target and their interactions in the right cells inside the pancreas.”

To further complicate this relationship, miR-483 also targets a particular coding protein — called SOCS3, short for Supressor Of Cytokine Signaling 3 — which magnifies its influence on insulin and glucagon production. On its own, SOCS3 inhibits beta cell growth; miR-483 inhibits SOCS3, allowing for beta cell growth to increase. As Tang and her co-authors point out in their study, “the imbalance of miR-483 and its targets may play a crucial role in diabetes pathogenesis.”

Only once more research has been done on these microRNA interactions will we better understand the genetic drivers of diabetes. But with this new data, the clues point to miR-483 with SOCS3 in the pancreas.

This research was done by Tang, her graduate students, Ramkumar Mohan, Yiping Mao and Shungang Zhang, as well as their collaborators Yu-Wei Zhang and Cheng-Ran Xu from Peking University and Gérard Gradwohl from the University of Strasbourg.  Funding was provided by the National Institutes of Health (grant DK084166.) Pictured above are Tang working with her students to study microRNA in pancreatic cells. Their findings could influence how to treat diabetes.