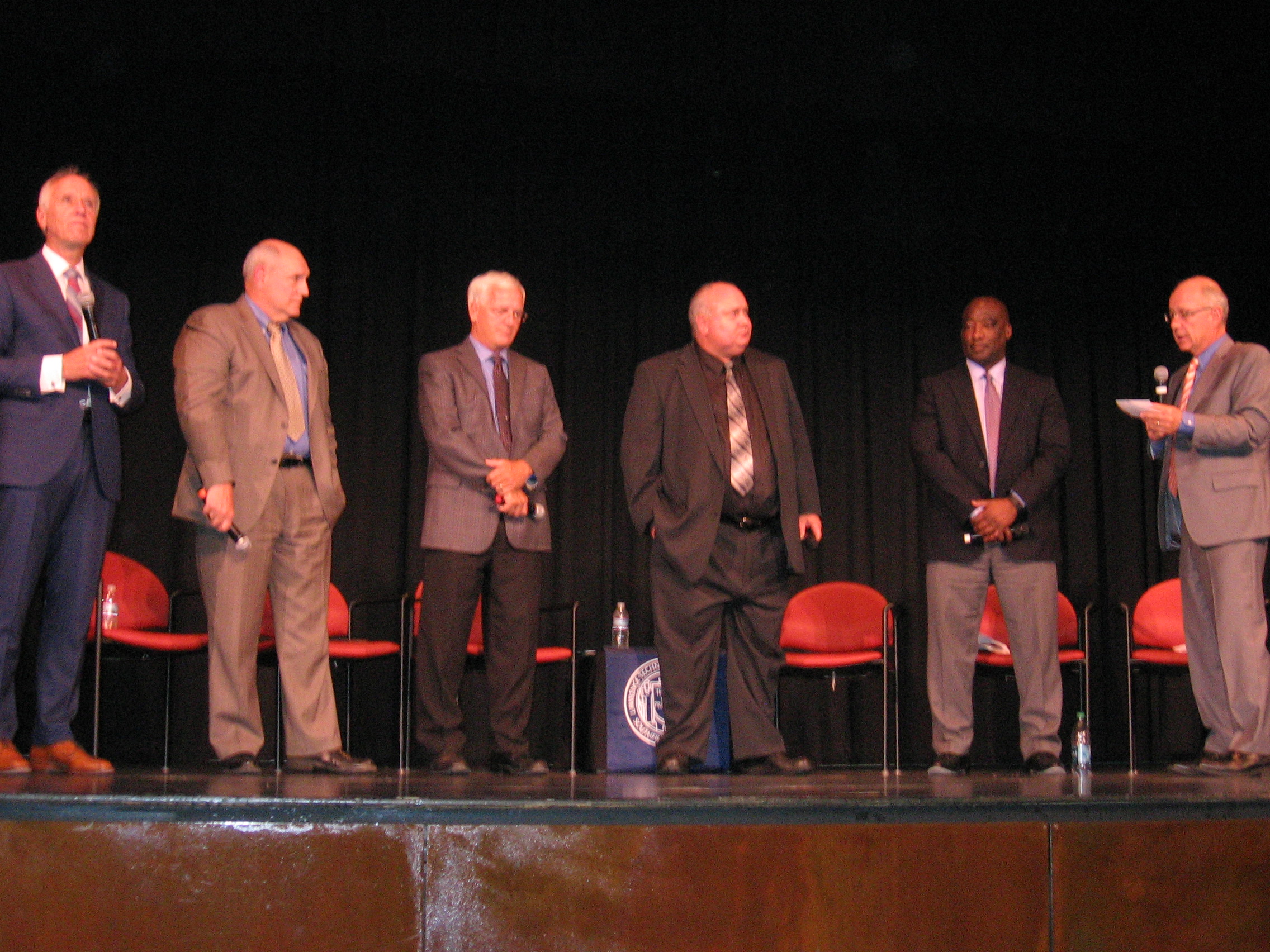 SOUTHFIELD — A capacity crowd of more than 300 heard about the future of transportation Tuesday night at the third annual installment of Lawrence Technological University President’s Symposium Series, “Exploring the Role of Technology in Solving Transportation Issues.”

Kirk Steudle, director of the Michigan Department of Transportation — who is also a Lawrence Tech graduate and a board member of The Engineering Society of Detroit — moderated a panel of experts who offered a fascinating glimpse at the connected, greener, safer, more shared future of mobility.

Steudle said the Michigan Mobility Initiative has united the MDOT, the Michigan Economic Development Corp., MichAuto, the Michigan University Research Corridor and Business Leaders for Michigan in an effort to create test sites for connected and automated vehicles of the future.

Among them are Mcity, the University of Michigan’s autonomous vehicle test village, and Smart Corridors, 125 miles of test highways for vehicle-to-infrastructure communication, including sections of I-94, I-696 and US-23. The corridor will test having the roads talk to cars and vice versa, exchanging information like red light violation warnings, work zone warnings, weather and pavement conditions.

There are also advances in providing truckers information on where to park to take required breaks, and truck platooning, using technology to create safe “trains” of closely following trucks.

Echoing other speakers, Baron also predicted a future of shared cars, in which you might take a small car to work but have easy access to a larger car for a vacation.

And all this high tech will require plenty of brainpower, Baron said: “If you want a job in engineering research, think Michigan first.”

Michael Ford, CEO of the Regional Transit Authority of Southeast Michigan, spoke about the transit study now under way by his agency, formed by the state Legislature in 2012. The RTA’s board — two each from Wayne, Washtenaw, Oakland and Macomb counties, one from the city of Detroit and one from the governor’s office — plans to be on the ballot in November 2016 with a regional mass transit funding proposal.

Metro Detroit’s much-maligned mass transit system now has 156,000 average daily riders. And Ford pointed out that from an economic development standpoint, “even if you don’t use mass transit you still benefit from it.” He said both young millennials and seniors “want to be able to get to where they want to go without
having to have a car.”

Chuck Gulash, director of the Collaborative Safety Research Center of Toyota Motor Engineering and Manufacturing North America Inc. in Ypsilanti, talked about the Japanese automaker’s efforts in researching the future of transportation. Included is everything from small urban vehicles to robots to artificial intelligence to research into automated driving. Toyota’s approach with the CSRC, which is funded through 2021, is to share its research results openly. The CSRC is working with 19 universities in its efforts, including the University of Michigan, Michigan Technological University and Wayne State University.

And, Gulash said, “We are hiring and are here at LTU recruiting.”

The next speaker, Douglas E. Patton — executive vice president of engineering and chief technical officer at Denso International America Inc. in Southfield, as well as the current president of ESD — spoke next, offering a “reality check” on autonomous driving.

By that yardstick, Patton said, autonomous driving is a long way off. He offered the Society of Automotive Engineers’ five levels of autonomous driving, from Level 0, no automation, to level 5, full automation in all driving situation and all weather conditions.

Patton said today’s most advanced vehicles look like level 2, partial automation, or level 3, conditional automation with the driver in the loop.

Denso provides a lot of the systems that will eventually be used in autonomous driving — powertrain control systems, informatoin and communication systems, driving control and safety systems.

He said the highways of the future look more shared, electric, autonomous, and connected.

He predicted “a lot more” electric vehicles, as advanced batteries ease range anxiety, and many more electric-gas hybrids, including a 2016 Chevrolet Malibu that will get almost 50 mpg in the city.

He said technologies now under development include vehicle prognostics — predicting when parts will fail — and more vehicle autonomy and communications.

“We will get to autonomous, but it will take much longer to get to driverless,” he said — but eventually, he predicted cars would become “horizontal elevators,” where you push a button and you’re there.

He also predicted far more car sharing among the young.

“We have gone from a society that wanted to own things to a society that just wants access,” he said. “All I want is access but I want it 24-7.” An example of this trend is the move from record albums to CDs to iTunes to streaming. “People want streaming like access to cars,” he said.

In the Q&A that followed the presentations, the panelists were asked which college course was most valuable to them in their careers. Smyth said design, Baron answered communications, Patton and Steudle said systems engineering, Gulash said business, while Ford said philosophy, because “it taught me how to
think.”

Steudle said systems engineering taught him “how things fit together. In my job right now there are so many unrelated related things that you don’t realize are related.” Also, he recommended communications courses, “so you can stand up here and give a speech.”