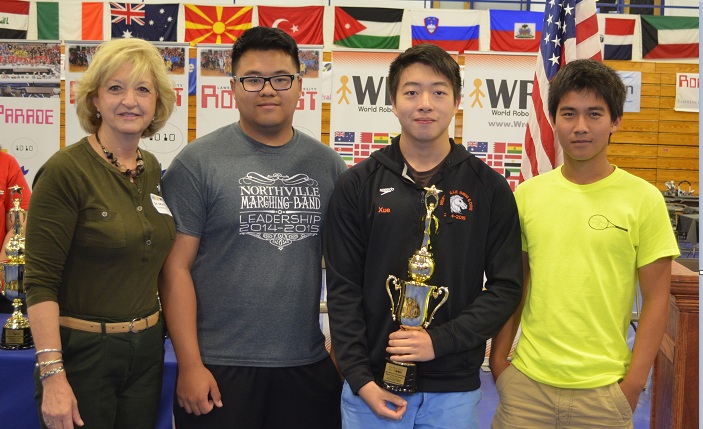 SOUTHFIELD — The national championships of the World Robot Olympiad were held at Lawrence Technological University Saturday, Sept. 19, and three of the eight teams that won the right to represent the United States in international competition are from Northville and Canton.

Earning the right to compete in the WRO international championships to be held in Doha, Qatar, Nov. 6-8 were:

• Brian Ding and Justin Chang of Northville and Eric Liu of Canton (RoboExplorers) who took first place in the Open Category.

• Charles Liu of Canton and Christopher Geng and James Kevin Xue of Northville (Robofest team), who took first place in the Regular University category, even though they are still high school students.

WRO started in Singapore in 2004, although the United States only began participating in 2014. About 20,000 elementary, middle school, high school and university teams from more than 50 countries began competing last spring by building and programming autonomous robots to perform specific tasks.

For the second year in a row, the WRO-USA national organizer has been Professor C.J. Chung of Lawrence Technological University. Chung, who teaches computer science, was selected to lead WRO-USA last year because of his leadership role in LTU’s Robofest competition, which also makes it fun for students to learn important principles of science, technology, engineering and mathematics.

WRO General Secretary Claus Ditlev Christensen of Denmark attended the event and spoke at the opening ceremony of the WRO-USA finals.

More results and information about the WRO-USA national championships can be found at www.wroboto.us.