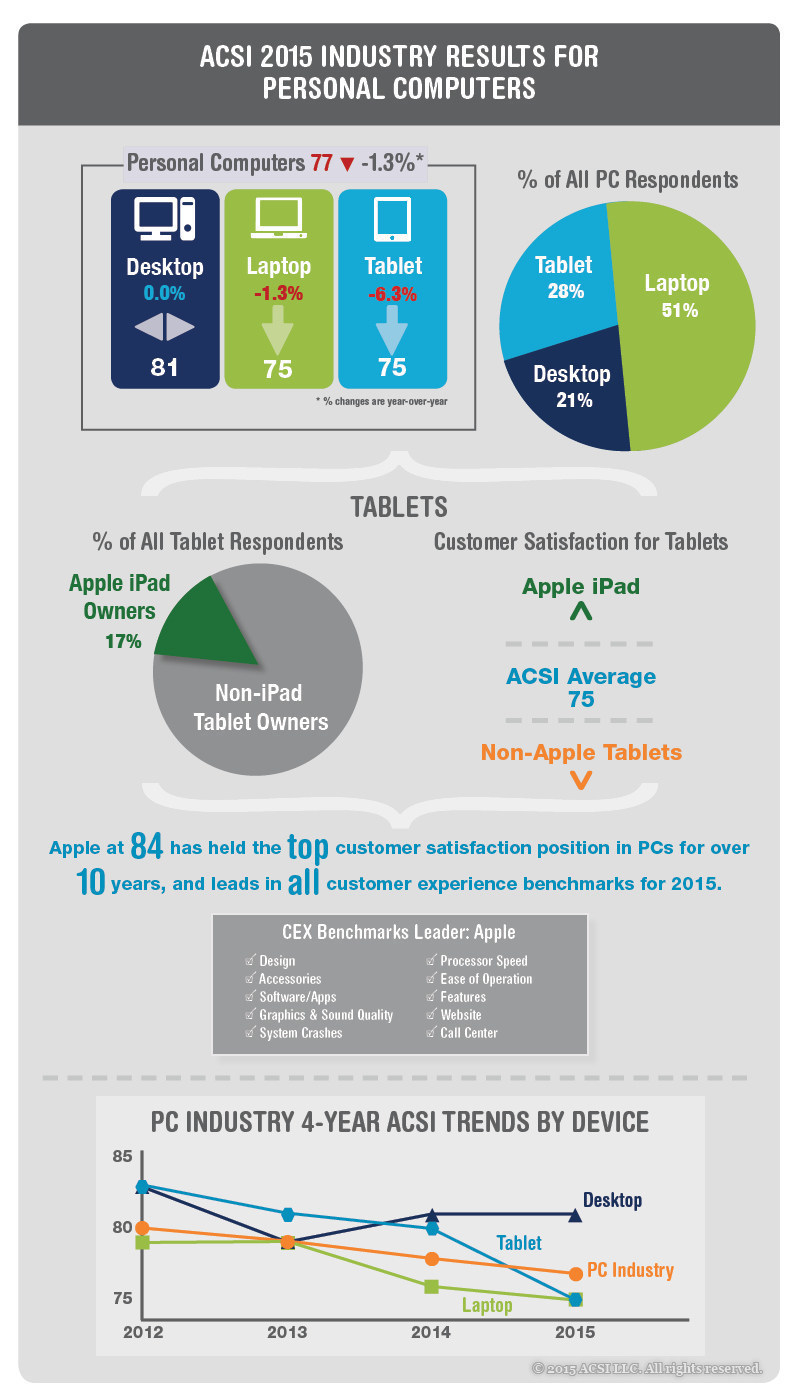 ANN ARBOR — Customer satisfaction with personal computers is down for a third straight year, according to new data from the Ann Arbor-based American Customer Satisfaction Index LLC.

The ACSI Household Appliance and Electronics Report 2015 includes desktops, laptops, and tablet computers, as well as household appliances and televisions and video players.

PC customer satisfaction fell 1.3 percent to 77 on ACSI’s 100-point scale. Desktop computers had the highest score (81) and tablets (down six percent to 75) lost the edge over laptops (down 1 percent to 75).

“Weaker customer satisfaction and slowing sales growth suggest that early enthusiasm for tablets has worn off,” said Claes Fornell, ACSI chairman, who developed the ACSI as a professor at the University of Michigan. “As large-screen smartphones become more popular, they’ve made tablets somewhat redundant – caught in between the mobility of a smartphone and the power and functionality of a desktop.”

Apple continues its ACSI dominance in PCs with a score of 84, well ahead of the rest of the industry. High customer satisfaction across all of its product lines may be attracting new customers to its PCs. Apple’s lead is even larger for tablets.

“Though Apple no longer accounts for the majority of all tablets sold, the iPad continues to set the bar for the industry,” says David VanAmburg, ACSI director. “Apple’s new tablet and its partnerships with IBM and Cisco may show that the company recognizes a shift in the tablet market toward business customers.”

Non-iPad tablets are well below Apple in customer satisfaction. New tablet ACSI entrants Amazon and Samsung debuted with identical ACSI scores of 78. Dell was the only PC maker to improve, gaining 3 percent to 78 and a share of second place.

Asus is also covered for the first time this year, coming in at the industry average (77). Meanwhile, smaller manufacturers deteriorated 7 percent to 76. Lenovo posted its first ACSI score of 74, followed by Toshiba (down 3 percent) and Hewlett-Packard (down 1 percent) at 73. At the bottom of the category, Acer dropped 8 percent to 70.

Major household appliances improved customer satisfaction by 1.3 percent to 81. General Electric gains the most, advancing 6 percent to tie new entrant LG for the lead at 82. Samsung, which was also included in the ACSI for the first time in this category, and Electrolux (up 3 percent) follow close behind at 81. A 1-percent slip for Whirlpool was enough to take it from first place to second-to-last – marking the first time the company has ever scored below the industry average. Meanwhile, Bosch debuted at the bottom of the category at 79; ACSI said its premium pricing may put pressure on expectations.

Customer satisfaction with televisions and Blu-ray and DVD players fell 4.7 percent to an ACSI score of 82. A year ago, “smart” technology lifted customer satisfaction with TVs to a record high, but most consumers have already upgraded to flat panel televisions and, at this time, don’t show much appetite for further upgrades. With prices already very low and market saturation high, the demand for newer technologies is not strong.

The ACSI report, which is based on 2,946 customer surveys collected in the second quarter of 2015, is available for free download at www.theacsi.org/news-and-resources/customer-satisfaction-reports/reports-2015/acsi-household-appliance-and-electronics-report-2015.

The ACSI is a national economic indicator of customer evaluations of the quality of products and services available to household consumers in the United States. The ACSI uses data from interviews with roughly 70,000 customers annually as inputs to an econometric model for analyzing customer satisfaction with more than 300 companies in 43 industries and 10 economic sectors, including various services of federal and local government agencies.

ACSI results are released throughout the year, with all measures reported on a scale of 0 to 100. ACSI data have proven to be strongly related to a number of essential indicators of micro and macroeconomic performance. For example, firms with higher levels of customer satisfaction tend to have higher earnings and stock returns relative to competitors. Stock portfolios based on companies that show strong performance in ACSI deliver excess returns in up markets as well as down markets. At the macro level, customer satisfaction has been shown to be predictive of both consumer spending and GDP growth.