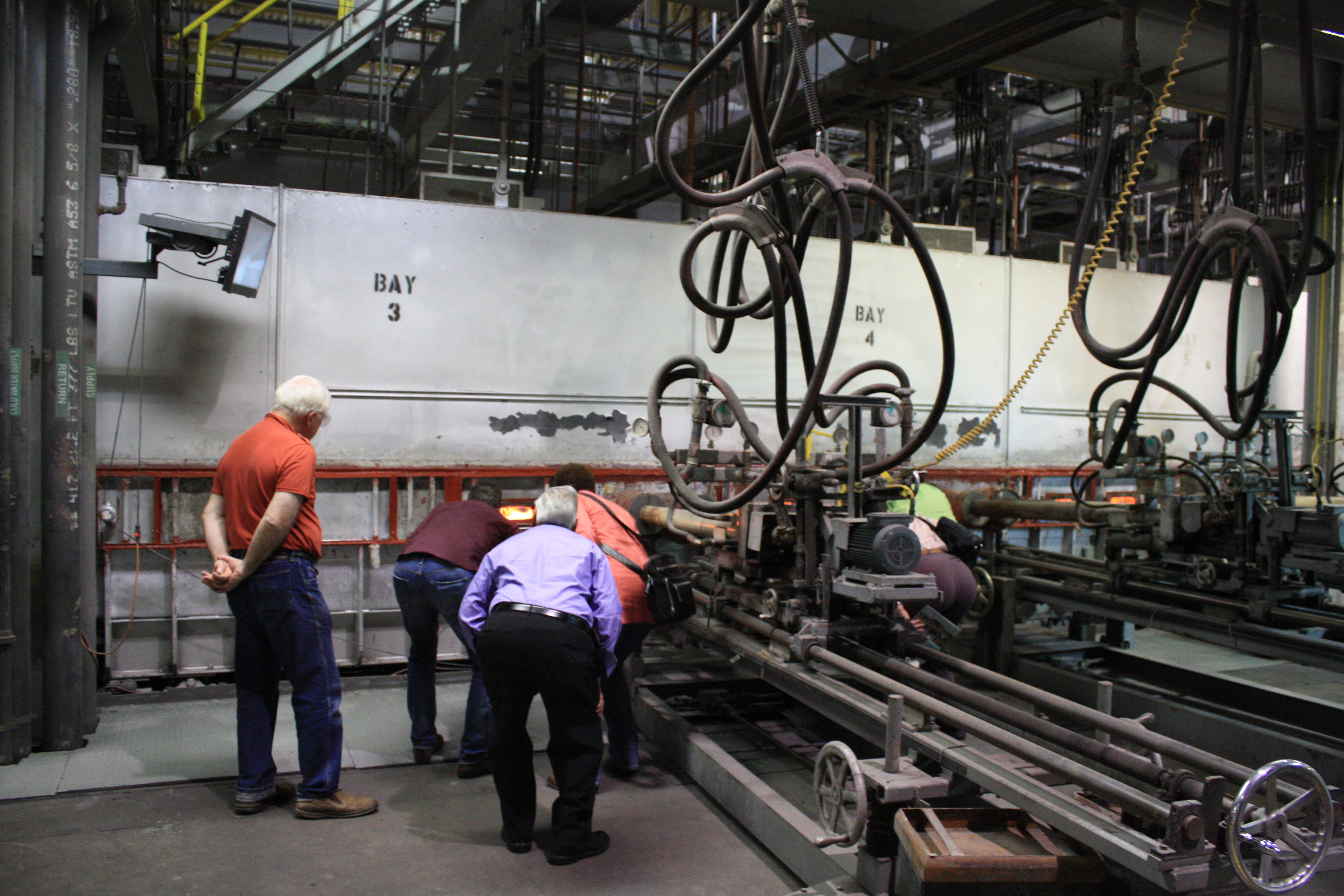 CARLETON — Members of The Engineering Society of Detroit enjoyed a tour of the Guardian Industries Inc. glass plant in Carleton Thursday afternoon.

It produces both architectural glass and automotive glass, which is generally tinted darker.

Construction on the massive plant began in 1969. At the time, it was one of only a handful of float glass plants in the world. A revolutionary technology introduced in the United Kingdom in 1959, float glass is manufactured by pouring molten glass onto one end of a shallow “bath” of molten tin at about 2,000 degrees. The molten glass is shaped into a ribbon, and floats on the tin until it cools to about 1,100 degrees, cool enough to be taken up by rollers without marring the surface.

At Guardian, raw materials — silica sand, soda ash, limestone and other ingredients — enter the furnace and are heated to 2,900 degrees. Then they’re poured onto the tin bath. At the end of the bath, the glass is carefully cooled through a temperature-controlled kiln called a lehr down to 125 degrees. Then the glass is further cooled by forced air, cut to customer-specific dimensions, and packed by employees and robotic arms for coating or direct shipment to customers.

Guardian dates back to 1932, when it was established in Detroit as a windshield manufacturer. Legendary CEO William Davidson — a nephew of an early investor in the company — took over in 1957, leading both Guardian’s initial public stock offering in 1969 and taking the company private again in 1985. Davidson was born in Detroit in 1922 and was a World War II veteran who earned a bachelor’s degree in business from the University of Michigan and a law degree from Wayne State University after the war. His business experience before Guardian included turnarounds at a pharmaceutical wholesaler and a surgical supply company. He also owned the Detroit Pistons from 1974 until his death in 2009.

After building the Carleton plant, Guardian added float glass plants in California and Texas in the 1970s, expanded into Europe in the 1980s, and spread around the world in the 1990s, with plants in Venezuela, Hungary, Thailand, India, Germany, Saudi Arabia and Brazil. In the 2000s, it added plants in Poland, the United Kingdom, Mexico, Egypt, the United Arab Emirates and Russia. (The heavy weight of glass makes it impractical to ship long distances, so plants tend to be close to customers.) The company also continued its U.S. expansion and now has seven float glass plants in the United States.

In 2000, Guardian opened its Science and Technology Center, located across the street from the Carleton plant. More than 70 scientists, engineers and technicians work to make glass perform in new ways. Crain’s Detroit Business has named the STC one of Michigan’s top generators of intellectual property among commercial and educational organizations. The STC was expanded in early 2015.

In addition to its glassmaking operations for the commercial, residential and automotive industries, Guardian is also one of the world’s largest suppliers of advanced, high value coatings on plastics for the automotive, commercial truck and consumer goods industries and is one of North America’s leading distributors of building products.