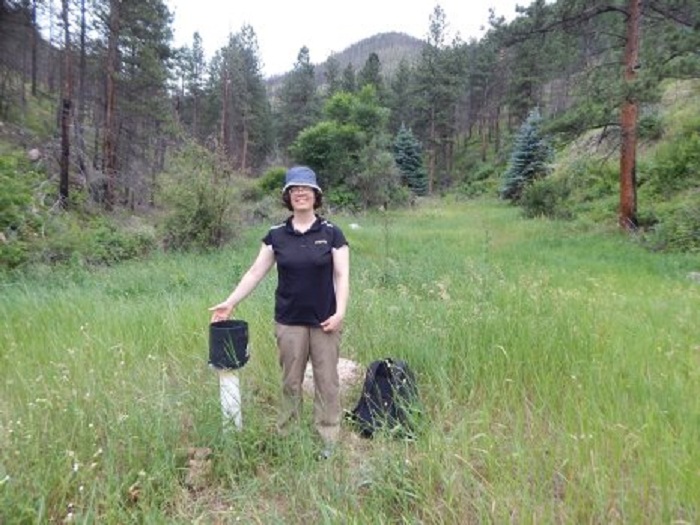 ANN ARBOR — California is on fire — again. About 130,000 acres have been scorched in more than 20 major fires actively burning in the state, according to the California Department of Forestry and Fire Protection. But the flames are not the only danger.

Post-fire flooding and landslides can threaten lives, property and natural resources, which can include important municipal water reservoirs or habitat for endangered species. In work funded by the National Aeronautics and Space Administration, Mary Ellen Miller, a research engineer at the Michigan Tech Research Institute, uses models and NASA earth observations to help predict erosion and runoff in areas burned by wildfire.

Right now, Miller is validating model results for the High Park Fire that burned in Colorado in 2012. (She’s pictured above at a bucket gauge in the High Park burn area.) Last year her team modeled hill slope erosion for four Californian fires.

“Preparation is a key component of disaster management,” Miller said, adding that adequate preparation and response to wildfire takes planning and team work.

After a fire, Burned Area Emergency Response (BAER) teams are formed to assess potential erosion and flood risks. If necessary, BAER teams develop remediation plans to protect lives and natural resources. The teams operate under very tight deadlines — typically sites must be assessed and treatments recommended within two weeks of containment of a fire. Miller and her research team are working hard to prepare tools and datasets that allow BAER teams to rapidly assess and predict post-fire effects using hydrological models and satellite imagery of fire impacted forests, shrublands and grasslands.

“Healthy forests create healthy watersheds,” Miller said, explaining that little runoff or erosion occurs when vegetation and forest litter protect soils. The amount of ground cover remaining after a wildfire primarily controls post-fire runoff and erosion rates; forest litter slows down the movement of water so it can be absorbed by the soils.

Fires can consume those protective layers and increase the risk of floods and landslides. Hot gases, from burning organics, can clump around soil particles, making soils water repellent — like a raincoat, the water runs off the soils and increases the risk of high runoff and surface erosion.

Some of these burns are visible from space, and satellite images are used to characterize the burn scars into low, moderate and high severity. Miller uses the information on burn severity to create hydrological model inputs. BAER teams need to know how much ground cover is left after the fire and if the soils have been altered by the fire. These changes affect hydrological systems — streams, groundwater, water absorption and other water processes — that greatly influence floods and landslides. That risk is then impacted by climate, slope angle, slope length and other factors.

Miller then takes all this data and uses it to create maps, models and online tools. Using these, Miller and the NASA-BAER team were able to support Forest Service BAER Teams on four fires that burned in the fall of 2014 in California. The French and Silverado fires were relatively easy to model, and predictions of post-fire erosion and runoff were generated within hours of the soil burn severity maps being released. The larger King fire and Happy Camp fire — around 100,000 acres each — both required one to two days to complete a modeling scenario.

The King Fire BAER Team used modeled predictions to assess mulching for remediation. Mulching is one of the most effective remediation treatments as it restores ground cover to the soils; however, it is also expensive. Using Miller’s tools, the BAER team showed a reduction in erosion due to mulching (shown in the map) and used this information to prioritize the technique and justify the cost.

Not all fire damage is preventable. But after a wildfire strips away the ground cover and litter layers, BAER teams can intervene. They can remediate burned areas — by laying down mulch or planting quick-growing seeds — protecting the area from further damage caused by runoff and erosion, as shown in the map below.

“In order to be effective, those treatments must be in place before the first major storm hits,” Miller says, adding that her team focuses on assessing an area’s risk by looking at hydrologic models and satellite imagery.

One of the primary sources of information is a burn severity map based on remote sensing data, usually from Landsat satellites. The map below shows changes caused by fire in vegetation and soil properties.

Miller and her NASA-BAER team then work on preparing maps and geographic data within a web-based tool. It is capable of rapidly modifying model inputs using recently acquired burn severity maps. Together, these satellite-derived maps and hydrologic models provide detailed data to make predictions of post-fire erosion and runoff.

“Having the datasets available rapidly means there is more time for BAER teams to model the effects of proposed remediation treatments,” Miller said.

A preliminary database with information for western states can be viewed online at http://geodjango.mtri.org/geowepp/. Modellers can choose from a historical fire or upload a new burn severity map; the database then formats soils, topography and land cover data to be used in modeling post-fire hydrology. Once the database has been completed, the tools and datasets will be transferred to US Forest Service collaborators at the Rocky Mountain Research Station in Moscow, Idaho. Work will be ongoing in the next two years to expand the database to cover the lower 48 states and to provide model inputs for additional modeling tools.

Based in Ann Arbor, MTRI is a research center of Michigan Technological University. It provides advanced research, development and practical application of sensor and information technology to solve problems in national security, protecting and evaluating critical infrastructure, bioinformatics, earth sciences and environmental processes. More at http://www.mtri.org/.