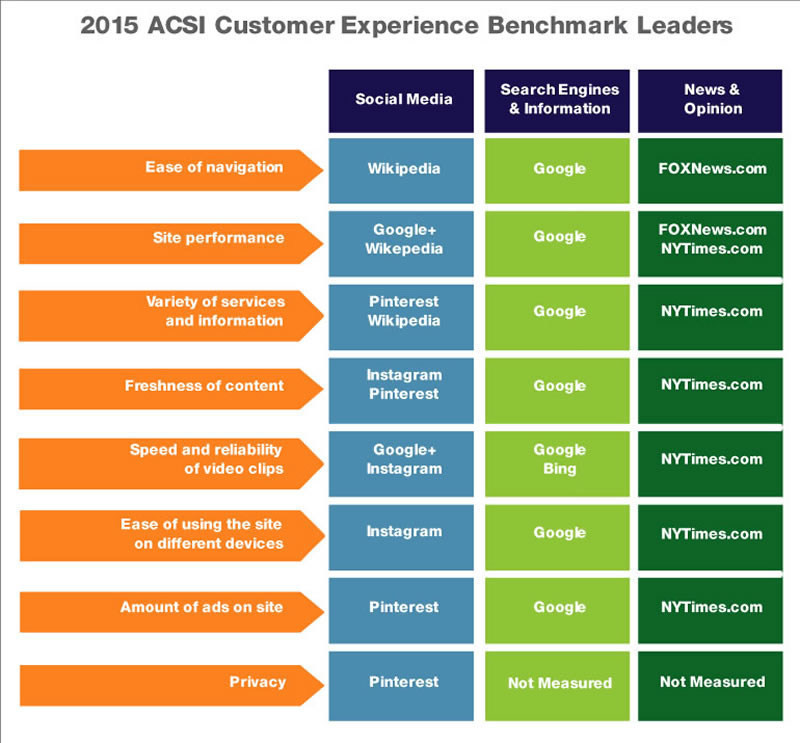 ANN ARBOR — Only a year ago, the American Customer Satisfaction Index from the Ann Arbor-based consumer metrics analyst ForeSee ranked social media among the worst industries in the index, right down there with cable TV and airlines.

But a year later, social media rose 4.2 percent to a score of 74 on the ACSI’s 100-point scale — well below the index standard of excellence of 80, but still a significant rise.

Other scores on the ACSI’s annual barometer of e-business included internet news and opinion websites, which fell 1.4 percent to 73, and search engines and information websites plunged 5 percent to 76.

“Today’s consumers practically live on their smartphones, and mobile compatibility is increasingly important to customer satisfaction,” said Claes Fornell, Donald C. Cook Distinguished Professor Emeritus of Business Administration at the University of Michigan, and ACSI founder and chairman. “Social media has made strides in improving the mobile experience, particularly through mobile apps that canbe optimized by operating system to ensure better compatibility with various screen sizes.”

The ACSI report, which is based on 5,400 customer surveys collected in the second quarter of 2015, is available for free download at this link.

Facebook registered the most improvement in the social media category, soaring 12 percent to an ACSI score of 75, ahead of the industry average. Its stock is also up more than 15 percent since the start of the year, and shares have returned more than 35 percent to investors over the past 12 months.

“The social media platform is an important channel for news organizations, and consumers are increasingly turning to Facebook and social networks for news updates,” says ACSI director David VanAmburg. “So perhaps it’s no surprise that social media now scores as highly as news and opinion sites in terms of providing fresh content and up-to- the-minute information, and Facebook outranks the websites of many of the largest news organizations for customer satisfaction.”

Leading the industry for a second year in a row, social bookmarking site Pinterest continued to improve with a 3 percent increase to an ACSI score of 78. In second place, Wikipedia rebounded 4 percent to an ACSI score of 77. The online encyclopedia leads the category for ease of navigation and site performance, but has yet to fully recover from a fall in user satisfaction a year ago.

Instagram made its first appearance in the Index with an ACSI score of 76. The mobile photo-sharing, video-sharing, and social networking site leads the category for ease of use on mobile devices such as smartphones and tablets. Meanwhile, YouTube leapt 4 percent to 76, as its viewing time rose 60 percent year over year.

Google+ was up 6 percent to 75, but users are no longer more satisfied with Google’s social networking site than they are with Facebook. Meanwhile, Twitter reached its highest ACSI score to date, rising 3 percent to 71. In the opposite direction, the average of “all other” social media sites, including Reddit and Snapchat, dropped 3 percent to 71. Near the bottom of the category, microblogging platform Tumblr posted its first ACSI score at 69. LinkedIn remained at the bottom despite a 1 percent uptick to 68.

ACSI data suggest that social media users are more satisfied with privacy protection – or at least less concerned – than they were a year ago. Also, users seem more accepting of advertising year-over-year and relative to other e-business websites.

Customer satisfaction with search engines and information websites slid 5 percent to 76, reversing last year’s gain. The decrease was due in large part to a drop for the company that defines the category. Google remains the undisputed leader despite receding 6 percent to 78, and its market share, at 64.4 percent, is still more than double its nearest competitor.

Mobile searches now exceed those from desktop, but the rise of the mobile platform has proved slightly more difficult for search engines than for social media or news and opinion websites.

“Most website content was created for the desktop browser first, but as consumers continue to shift more of their Internet activity to mobile devices, companies need to optimize for different screen sizes, mobile browsers and operating systems,” VanAmburg said. “While social media and news and opinion websites are usually available through an app, there is no guarantee that the websites listed in mobile search results will be compatible with mobile devices.”

After Google, the race for second place intensifies with only 3 points
separating Bing, AOL, MSN and Yahoo. The aggregate score for smaller niche-like search engines is down 3 percent to 75. Yahoo! climbs 6 percent to 75, while MSN was up 1 percent to 74. AOL tied MSN after a 6 percent gain. Bing gained in market share but slips in user satisfaction, down 1 percent to 72. New ACSI entrants About.com (71) and Answers.com (67) made up the category’s bottom.

User satisfaction with news and opinion websites dipped 1.4 percent to an aggregate ACSI score of 73. Stagnant at 76, FoxNews.com no longer held the advantage over NYTimes.com, which jumped 4 percent to 76 following its largest website redesign in seven years.

USAToday.com, which tied FoxNews.com for the lead among individual sites last year, was down 3 percent to 74 and now tied ABCNews.com, which was unchanged. MSNBC.com was up 3 percent to 75, while CNN.com gained 4 percent to match the industry average of 73. The aggregate score of all other, smaller outlets plummeted 6 percent to 72, losing its edge from a year ago. The Huffington Post inched up 1 percent to 71.

In addition to company and industry customer satisfaction scores, the ACSI measures critical elements of the e-business experience that influence user satisfaction. These customer experience benchmarks include ease of navigation, site performance, freshness of content, device compatibility, advertising and privacy.

The ACSI uses data from interviews with roughly 70,000 customers annually as inputs to an econometric model for analyzing customer satisfaction with more than 300 companies in 43 industries and 10 economic sectors, including various services of federal and local government agencies.

ACSI results are released throughout the year, with all measures reported on a scale of 0 to 100. ACSI data have proven to be strongly related to a number of essential indicators of micro and macroeconomic performance. For example, firms with higher levels of customer satisfaction tend to have higher earnings and stock returns relative to competitors. Stock portfolios based on companies that show strong performance in ACSI deliver excess
returns in up markets as well as down markets. At the macro level, customer satisfaction has been shown to be predictive of both consumer spending and GDP growth.