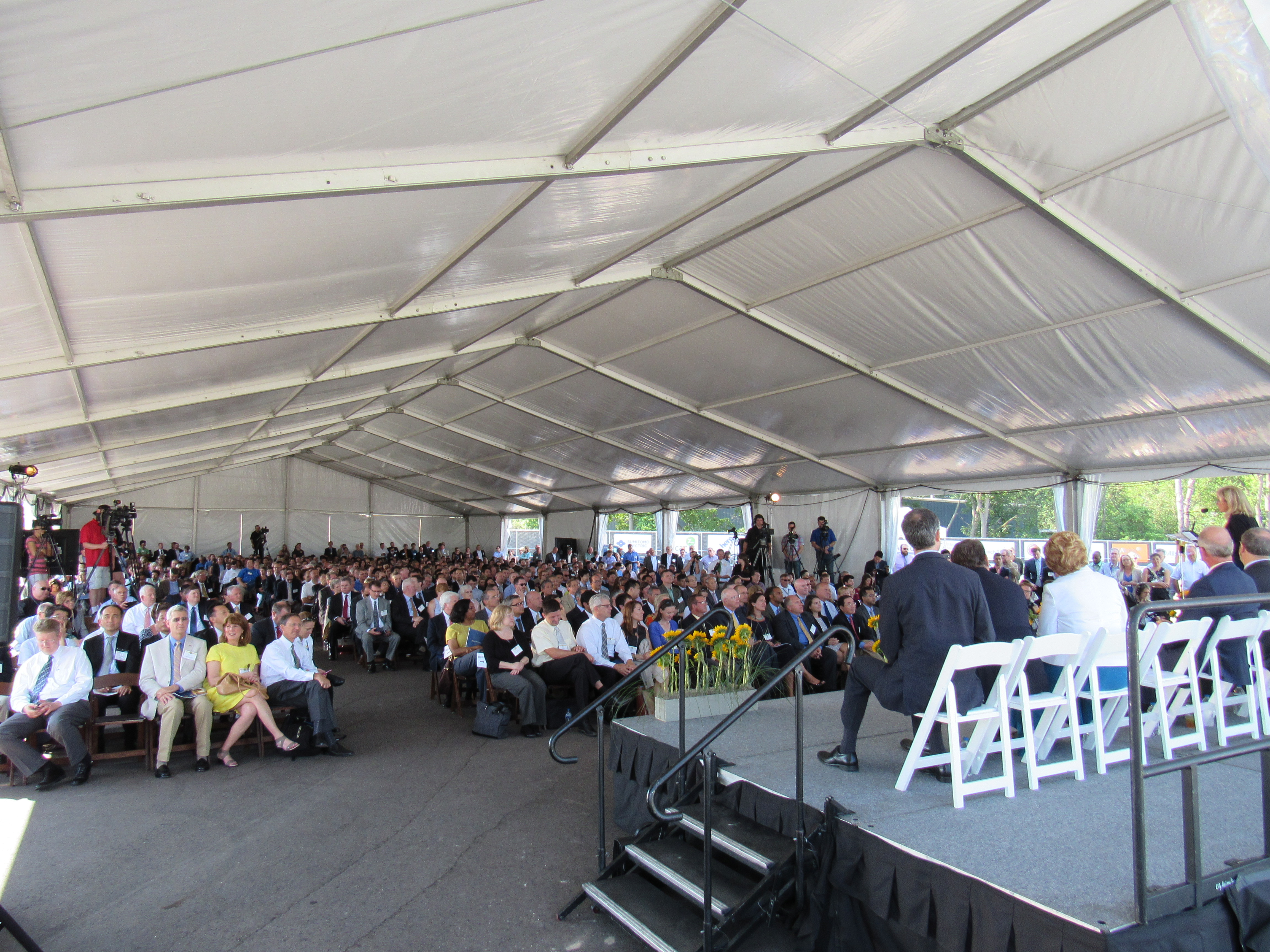 ANN ARBOR — The University of Michigan is known for big crowds, and Monday’s formal opening of Mcity — the world’s first test center specifically designed for connected and automated vehicle technologies — was no exception.

More than 600 people packed a huge tent on the 32-acre Mcity site to hear university and political leaders talk about the potential of the research that will take place there.

“This technology will transform our economy and transform our planet,” U.S. Sen. Gary Peters (D-Mich.) said, adding that it was no coincidence that the center opened on July 20 — the same date as man’s first steps on the moon more than four decades ago.

Added U.S. Sen. Debbie Stabenow (D-Mich.): “It’s not a question of whether we’re going to have autonomous vehicles, it’s a question of when… Can Michigan win and revolutionize transportation? I would suggest you ask the horse. We’ve done it before.”

Mcity was designed and developed by UM’s interdisciplinary MTC, in partnership with the Michigan Department of Transportation.

UM president Mark Schlissel said Mcity is “precisely the kind of collaboration I am encouraging at the University of Michigan.”

And MDOT director Kirk Steudle, PE, FESD, said he thought what was “unique about Mcity is all these banners along the fence, representing all the companies that came along in this effort — fierce competitors that came together to solve the mobility challenges of the future.”

The facility also underscores Michigan’s emergence as a leader in advanced mobility, building on the state’s position as the global center of automotive research and development for more than a century. Today, Michigan is home to 375 automotive research centers, and has the highest concentration of industrial and mechanical engineers in the country.

“We’ve been a world leader in innovation, especially in terms of mobility,” Michigan Gov. Rick Snyder told the crowd in a recorded statement. “We put the world on wheels. We transformed how the world moved. Michigan is uniquely positioned to continue to be a leader in mobility, and the University of Michigan’s new Mcity will play a critical role in that future.”

Mcity is a 32-acre simulated urban and suburban environment that includes a network of roads with intersections, traffic signs and signals, streetlights, building facades, sidewalks and construction obstacles — even one of those much-debated traffic circles. It is designed to support rigorous, repeatable testing of new technologies before they are tried out on public streets and highways.

In particular, Mcity allows researchers to simulate the environments where connected and automated vehicles will be most challenged. Even seemingly minor details a vehicle might encounter in urban and suburban settings have been incorporated into Mcity, such as road signs defaced by graffiti and faded lane markings.

The types of technologies that will be tested at the facility include connected technologies – vehicles talking to other vehicles or to the infrastructure, commonly known as V2V or V2I – and various levels of automation all the way up to fully autonomous, or driverless vehicles.

The MTC was established to lay the foundation for a commercially viable ecosystem of connected and automated mobility that will revolutionize the movement of people and goods worldwide. A key MTC goal is to put a shared network of connected, automated (including driverless) vehicles on the road in Ann Arbor by 2021.

In addition to Mcity, MTC has three on-roadway connected and automated vehicle deployments underway. With the help of the Michigan Economic Development Corp., MTC is building on a nearly 3,000-vehicle connected technology project launched three years ago by the UM Transportation Research Institute to create a major deployment of 9,000 connected vehicles operating across the greater Ann Arbor area. MTC is also partnering with industry and the Michigan Department of Transportation to put 20,000 connected vehicles on the road in Southeast Michigan. The third piece of the plan calls for deploying a 2,000-vehicle mobility service of connected and automated vehicles in Ann Arbor.

“This unique combination of a purpose-built test environment and real-world deployments sets UM apart from other organizations and institutions doing similar work,” said Jim Sayer, director for deployment for MTC, adding that Mcity is a globally unique laboratory for connected and autonomous vehicles.

In the private sector, MTC partners include automakers and top tier auto suppliers, but also traffic signal and traffic sensing companies, insurance providers, telecommunications, big data, IT and more. On the public side, MTC is working with federal, state, and city governments.

MTC was launched in 2013 and Mcity construction began last year. About $10 million has been invested in the test facility, with funding coming from U-M and MDOT. Mcity will be available for use by any organization, but priority will be given to MTC partners and UM faculty and students.