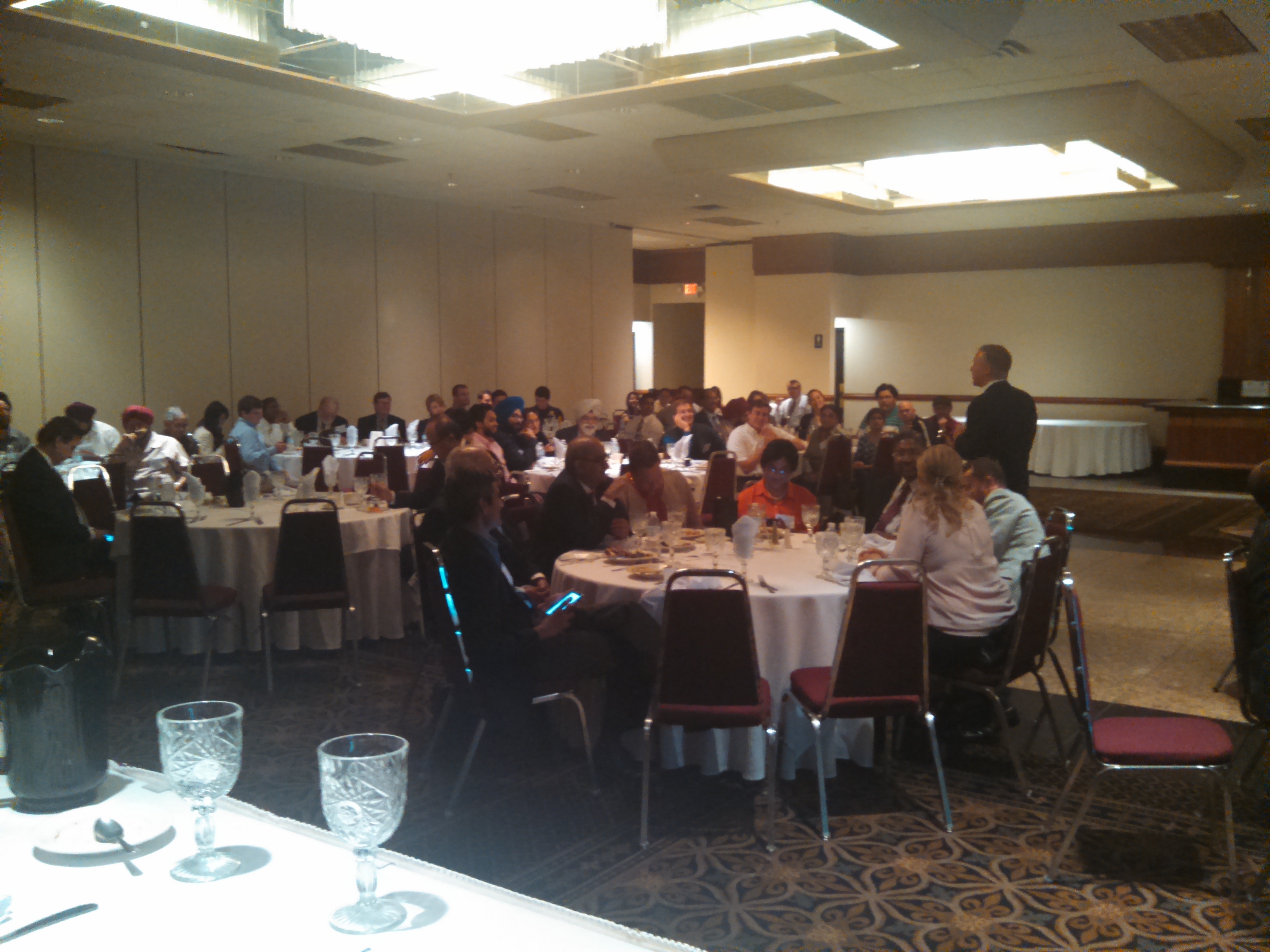 More than a dozen presenters shared how they’re using engineering to better the lives of people around the world in the event, which drew a crowd of more than 100.

Or, as presenter Dr. Suresh Bansal, PE, president of the HEV Technology Center put it: “I have 10 grandchildren, and they ask me what engineers do. Engineers learn the scientific principles and apply them to improve the quality of life of mankind.”

Bansal also said there are far more efficient ways to get biofuels than corn — saying an acre of corn produces 18 gallons of fuel, while an acre of peanuts produces 113, an acre of coconut trees 287, and an acre of algae in water at least 800.

Highlights of other presentations at the event included:

* Sanjay Dhall of Emergent Systems in Dearborn defended drone aircraft, calling them simply mobile robots with sensors that can improve fire safety and agricultural efficiency. Drones, broadly defined, also include Mars rovers and other space probes — they can go places people can’t, including inside Japan’s Fukushima nuclear plant. He said people should try to overcome their fear of drones in terms of weapons and threats to privacy.

* Risarg “Reggie” Huff, director of homeless recovery for the Detroit
Neighborhood Service Organization, said he’s working on technology to coordinate services for the homeless, including a statewide database that would allow various agencies to share information.

* Taulant Kadiu spoke of his work at the Balkan American Community Center, which has several projects to bring young people from the United States and offer them chances at international internships.

* Ravindra Nath and Wanda Whitten Shurney of Children’s Hospital of Michigan presented on their work with patients with sickle-cell anemia, a disease primarily of west Africa and east-central India, a defect of the molecular structure of hemoglobin in the blood that stretches out red blood cells so that they clog blood vessels, causing strokes, pulmonary hypertension, leg pain and other problems. Chemistry and genetic research is being used to combat the disease.

* Dean Aslam of Michigan State University’s engineering faculty discussed his work in electrical sensors embedded in fabric for various medical applications — including electroencephalograms for the brain, electrocardiograms for the heart, and muscle sensors.

* Robert Erlandson of Wayne State University spoke of his work in the university’s Enabling Technologies Laboratory, which aims to use universal and accessible design to allow people with disabilities to use more products and lead fuller lives.

* Pieter Frick of Oakland University spoke of the electronic communications revolution that started with radio, moved into TV and transistors, and exploded with integrated circuits, faster and faster computers, and the internet. He said science has just about reached the speed limit of computer cycles in silicon, however.

* Kai Yang of Wayne State University spoke of his work in using systems engineering to promote more efficiency in health care delivery, pointing out that the United States spends twice as much on health care as the second-most-efficient country, yet doesn’t see better health care outcomes. His lab has grown from three projects and $60,000 a year in research funding in 2007 to 11 projects and $1.7 million a year in funding. He’s also writing a textbook to define the profession of healthcare systems engineering.

The other keynoter, Yvette Pearson Weatherton, PhD, PE, offered ideas for better funding submissions to the National Science Foundation, where she is program director of the division of undergraduate education.

To get funding, she said, applicants need to look at both intellectual merit and broader societal impact, including the potential to benefit society and contribute to the achievement of specific desired societal outcomes.

She said major current areas of interest include cybersecurity, sustainability, and accessibility — universal access for the disabled.

Also, she said, NSF looks favorably on project that increase scientific
literacy and news coverage of science and technology. She said the
percentage of news minutes devoted to science, space and technology on major network newscasts peaked in 2000 at 5 percent due to fears of the “Y2K bug” and have plunged since.