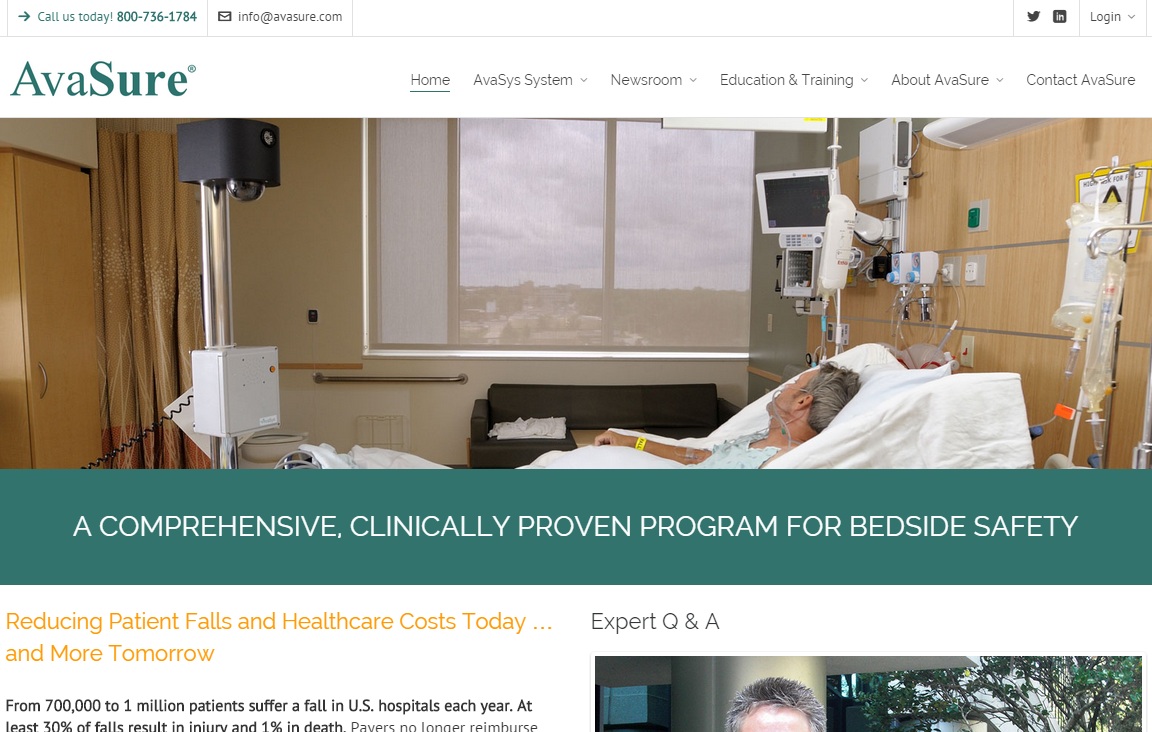 Results of a two-year pilot study of the AvaSys TeleSitter Solution at University of San Diego Health System were published online ahead of the July edition in the Journal of Nursing Administration, a publication for nurse executives.

In an effort to prevent patient falls and other problems, AvaSys officials said many hospitals use patient “sitters” – staff members who remain in patients’ rooms to prevent accidents and injuries.

The study compared the use of AvaSys and a nursing-driven sitter use protocol in nine units of a 595-bed hospital against the use of human sitters. During the 21-month study, six remote video monitoring units were used. Five months into the study, UCSDHS introduced a sitter protocol that allowed live sitters only for patients at risk of suicide, running away or who risk harming others. Because the literature shows that one-on-one human sitters are not effective at reducing patient falls, fall-risk patients no longer qualified for sitters.

The study demonstrated that remote video monitoring saved the health system $772,000 in the first year and $1.7 million in the second. With the total cost of the AvaSys system in the first two years of $82,482, the return on investment calculated system-wide was 29.2 times the initial investment. And in the same time period, for most quarters, UCSDHS outperformed or equaled national benchmarks for falls and falls with injury.

“There was a significant return on investment, both at the organizational level … and in the units where we implemented video monitoring,” said study author Paige Burtson, RN, MSN, associate director of nursing medical surgical specialties at the health system.

The study was co-authored by Laura Vento, MSN, RN, assistant manager for quality improvement at UCSDHS.

“AvaSys is the surest way to be certain that at-risk patients get 24-hour vigilant supervision and reassurance in real time,” said Melanie Dreher, PhD, a member of the AvaSure advisory board and chair of the national board of Trinity Health.

AvaSure says its technology remains the only fall-prevention system with peer-reviewed clinical research into its efficacy.

Additional research about AvaSys’ effectiveness has been published in Patient Safety & Quality Healthcare magazine and presented by nursing leaders at national conferences such as the National Magnet Conference, the Nursing Management Congress and the Collaborative Alliance for Nursing Outcomes Annual Conference.

Patient falls are non-reimbursable “never events” and a high-risk, high-cost problem for hospitals. As many as 1 million patients suffer a fall each year, and at last 30 percent of inpatient falls results in moderate to severe injury. Since 2008, Medicare has refused to pay the extra cost of treating a fall with injury, which averages $27,000. Outcomes associated with patient falls include increased length of stay, increased costs of care, greater fear of falling (for patients and caregivers) and emotional distress.

The AvaSys TeleSitter Solution, manufactured and distributed by AvaSure, is a remote patient observation and communications platform that enables both visual and audio monitoring of patients at risk of falls. It allows a single caregiver to keep track of as many as 15 patients at once from a central monitoring station. These trained observers can vocally intervene with patients – while simultaneously summoning a nurse – long enough to avert harm. AvaSys provides mobile audio-visual observation units, which can simply be wheeled into a room and turned on, giving nurses instant room coverage.

Since its introduction in 2008, AvaSys has become the fastest-growing technology to prevent falls and other injurious behavior. Regional health systems such as Memorial Hermann Health System in Houston, Inova Health System in Virginia, University of California Health, Partners Healthcare in Boston, UnityPoint Health in Iowa and Wheaton Franciscan Healthcare in Wisconsin have adopted AvaSys, as have national systems such as Ascension Health, HCA, Dignity Health, Mercy Health, Tenet Healthcare and Trinity Health.

AvaSure is based in the Grand Rapids suburb of Belmont, an unincorporated community that is part of Plainfield Township.