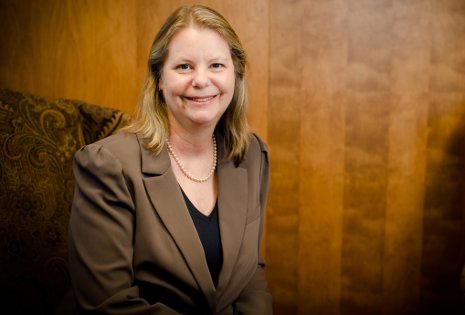 Huntoon has been dean of Michigan Tech’s Graduate School since 2005 and associate provost since 2011. She is also a professor in the Department of Geological and Mining Engineering and Sciences.

Her new appointment is effective July 20. She replaces Max Seel, who has returned to the Department of Physics faculty.

“I am honored to be given the opportunity to take on this new role and responsibility at Michigan Tech,” Huntoon said. “I have been with the university since 1990 and have come to feel that this place is my true home. We are a unique institution in a beautiful area. Our students, faculty and staff are hardworking, creative and highly intelligent, and I know that I will continue to enjoy working with them all.“

President Glenn Mroz said the choice was a difficult one.

“We had excellent candidates, and each brought different strengths,” Mroz said. “We had to decide who would be the best fit for the university at this time. Jackie’s experiences leading the graduate school during a period of strategic growth align perfectly with the strategic plan recently approved by the Board of Trustees and our vision for 2035.”

Huntoon has been recognized nationally for her leadership in higher education and in her field of geology. She currently serves as the chair of the Graduate Record Exam Board, which oversees the exams most commonly used to evaluate the qualifications of students applying for graduate school, and she has served as program director for diversity and education at the National
Science Foundation’s Directorate for Geosciences.

Huntoon earned her PhD in Geology at Pennsylvania State University. She is a member of the American Society for Engineering Education and has been elected a Fellow of the Geological Society of America. In 2011, she was elected to the Michigan Tech Academy of Teaching Excellence.

She has won more than two dozen sponsored research awards, including most recently a $5 million grant from the Herbert H. and Grace A. Dow Foundation to reform middle-school science teaching in Michigan.

Huntoon will work on transition plans for the Graduate School and her new post that she will assume on July 20. Dave Reed continues serving as interim provost until that time.

“I plan to work with President Mroz and the deans to articulate a strategy for the coming years that will help keep us on our path toward achieving the goals stated in the University’s Strategic Plan and Vision for 2035,” she said.