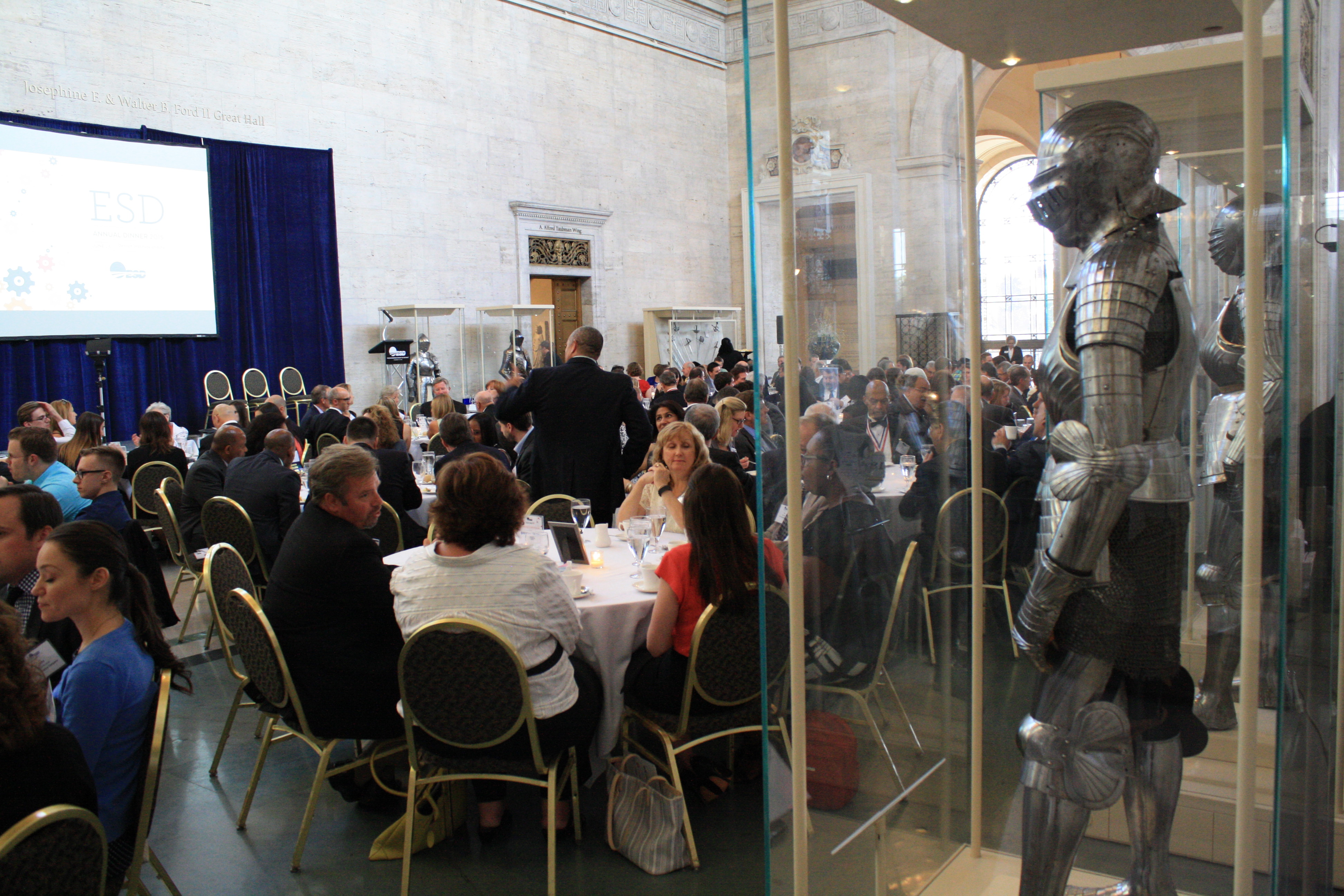 DETROIT — Nearly 300 members and supporters of The Engineering Society of Detroit gathered Wednesday night at the Detroit Institute of Arts for the ESD’s 2015 Annual Dinner, a celebration of the art of engineering.

ESD is a uniquely cross-disciplinary membership organization for
engineers and people in related scientific and technical fields.
Besides all forms of engineering, its members work in industries as
diverse as information technology, architecture and construction. ESD’s mission is to support the current generation of engineers through a wide variety of educational, networking and leadership programs, and foster the next generation with youth activities designed to build excitement in Science, Technology, Engineering and Mathematics education and occupations.

The Rackham Award symbolizes exemplary service both to the
engineering and scientific world and to the community at large. Under Link’s leadership since 1989, Link Engineering has grown to become a global leader in building machinery that tests manufactured components in real-world conditions. Link Engineering’s products are used in the automotive, aerospace, railroad and other industries.

In the community, Link has been a tireless and passionate volunteer
at ESD, starting with its Young Engineers Council, of which he is a
former chair. Link also served on ESD’s nominating and awards
committees before serving as treasurer and vice-president of its
board, and its board president in 1984-85. He was named to the ESD
College of Fellows in 1988 and later served on the Fellows Executive Committee, and currently chairs the board of the Rackham Engineering Foundation, which has as its main mission the ongoing support of ESD. Link has engineering and business degrees from Michigan State University.

ESD’s Lifetime Achievement Award, bestowed upon an ESD member in recognition of a lifetime of achievement to the benefit of education and the field of engineering, was presented to Richard J. Haller, FESD, president and COO of the Detroit-based construction
company Walbridge.

A civil engineer, Haller joined Walbridge in 1976 in its estimating and project administration team and became COO in 1997. He has been involved in some of the firm’s most prominent projects, and has led Walbridge’s efforts in sustainability and quality. He has been an active member of ESD since 1978, chairing its Young Engineers Council and serving as ESD board president in 2007-09. He received a Distinguished Service Award from ESD in 2002 and was inducted into its College of Fellows in 2011.

Outside ESD, he is also active (and a former chair) on the
Construction Industry Institute and has served on the advisory board of the College of Engineering of his alma mater, the University of Michigan. He has also served on committees at Lawrence
Technological University and Siena Heights University and has chaired the Greater Detroit Area Health Council. He is a veteran of the U.S. Army Corps of Engineers Active Reserve.

ESD also named Andrew J. Hermiz, PE, a structural engineer with
Harley Ellis Devereaux, its Outstanding Young Engineer of the Year.
This award is given for outstanding contributions to the engineering
community by an individual under age 35.

ESD also presented four Outstanding Student Awards. Earning the
college student awards were LaMyra Stevenson, a student at the
University of Michigan-Dearborn, and David Zoltowski, a recent
graduate of Michigan State University who is headed for graduate
electrical engineering studies at Cambridge in the United Kingdom.

Further information on any of the winners is available by contacting
Matt Roush, ESD Director of Communications and Public Relations,
at (248) 353-0735, ext. 112, or mroush@esd.org. High-resolution
photographs of the event are also available.