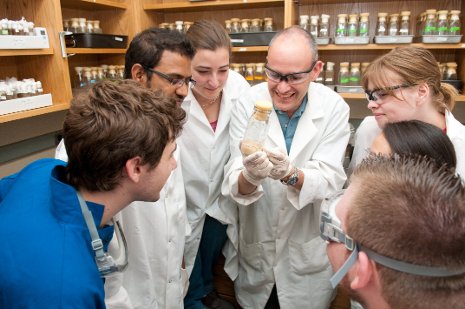 HOUGHTON — For being so small, fruit flies have had a large impact on genetic research. Thomas Werner, an assistant professor of biological sciences at Michigan Technological University, has bridged the miniscule and the massive in an effort to better understand the mechanisms behind several unique features of fruit fly genes.

Over the past week, several studies that Werner co-authored have been published in PLoS ONE, the Proceedings of the National Academy of Sciences, and Nature Education. All are linked by Drosophila — a genus of fruit flies — and the insights that fruit fly genetics provide on human health, specifically cancer-causing genes.

The fruit flies that come in with your bananas are not all that keen on eating mushrooms. However, there are three strains of Drosophila melanogaster from Taiwan, India and Malaysia that tolerate a bit of alpha-amanitin (α-amanitin), the deadliest of all mushroom toxins. More than 30 times more toxic than cyanide when eaten, α-amanitin is found in Death Cap and Destroying Angel mushrooms. The three Asian fruit fly strains are surprisingly resistant to this toxin.

“And they shouldn’t be,” said Chelsea Mitchell, a PhD student studying with Werner at Michigan Tech. She explains that the flies developed resistance at least half a century ago in their natural habitats, possibly due to pesticide exposure. For the past half century — about 1,200 fly generations — these flies were reared in captivity without toxins in their food. As strange as the resistance itself is that fact that it didn’t go away over time, Mitchell said: “The big question is, why didn’t they lose that resistance in the absence of selective pressure?”

In two separate studies — one published in PLoS ONE last month and the other last year — Werner, Mitchell and an army of undergraduate students teased out the answer. They counted nearly ten thousand fruit fly eggs, which has to be done under a microscope, measured the thoraxes of thousands of adults and tallied up the life spans of the fruit flies in an effort that took a total of four years. One group of the resistant flies was exposed to the toxin; another resistant group was monitored with no toxin present and a third control group of susceptible flies was not exposed to the toxin. Both resistant groups showed a suite of activated genes that are known as signals of pesticide resistance — suggesting the mushroom toxin resistance was caused by agricultural pesticides. And while the life spans and thorax length of the exposed fruit flies came up short in response to increasing toxin exposure, the egg laying capacity doubled.

“What we often see in evolution is ‘use it or lose it’,” Werner said, adding that toxin resistance usually means more energy consumption and fewer offspring produced. So, there has to be motivation to keep that resistance up. The egg laying boost in response to eating α-amanitin may be the sought-after benefit to the resistance.

These findings could be important for our understanding of agricultural pesticide resistance. Werner says that these particular fruit fly strains prefer rotten fruit to valuable crops. But a closely related agricultural pest, another Drosophila species, shares the same genes that could easily develop such a resistance and cause a real threat to agriculture.

This on-off mechanism, called up-down regulation in genetics, doesn’t exactly work like a light switch. It’s more like a dimmer switch. In the fruit flies, the pesticide-resistant genes aren’t just flipped on, they are several hundred times more active than in toxin-susceptible individuals. Said Werner: “It’s as if the light in resistant flies is very bright and on all the time.”

With enhancers, genetics research now delves into what scientists used to refer to as the “dark matter of DNA,” stretches of what seemed to be useless junk DNA. Today we know that some of these non-protein-coding regions contain the enhancers of genes. Enhancers tell genes in what part of the body, at what time and in what intensity they need to be turned on; they help ensure our head and feet don’t get mixed up.

“You don’t want the master control gene for eye development to be turned on in your feet,” Werner jokes, explaining that the genes for eyes, hair and fingers are all found in our toes, but the dimmer switch is turned all the way down. “Enhancers — or cis-regulatory elements — orchestrate when, where and how much a gene gets turned on,” he said.

Understanding the gene-regulatory mechanisms and enhancers behind one of those master control genes in fruit flies is the subject of a new study Werner co-authored in the Proceedings of the National Academy of Sciences. This gene is essential for both fruit fly and human embryos. In fruit flies, this gene also makes black wing spots like the ones above. In humans, this gene is a proto-oncogene that causes cancer when it is misregulated.

Since fruit flies and humans share so many of their genes, these small insects make a useful model for better understanding cancer-causing genes.

“It is a very time-consuming survey to find the enhancers of a gene,” Werner said, adding that while it pays off to learn more about the nitty-gritty of gene-regulatory elements and their link to cancer, it is highly challenging and very tedious work.

Another challenge is recruiting, inspiring, and educating undergraduates in genetic research. Werner won the Michigan Tech Teaching Award in 2013 but says he wants effective teaching to extend beyond the Michigan Tech campus. This led him to publish a third paper in Nature Education, which distills his proto-oncogene research into a more undergraduate-friendly article.

For Werner, effectively teaching genetics, unraveling enhancer genes, and connecting the dots between poisonous mushrooms, pesticides, proto-oncogenes and fruit flies all follow the process: “To create biological complexity, all it takes is to add simple pieces to a bigger picture.”

(In the photo above, Thomas Werner shows a bottle of fruit flies to a group of his students, including Chelsea Mitchell (center).)