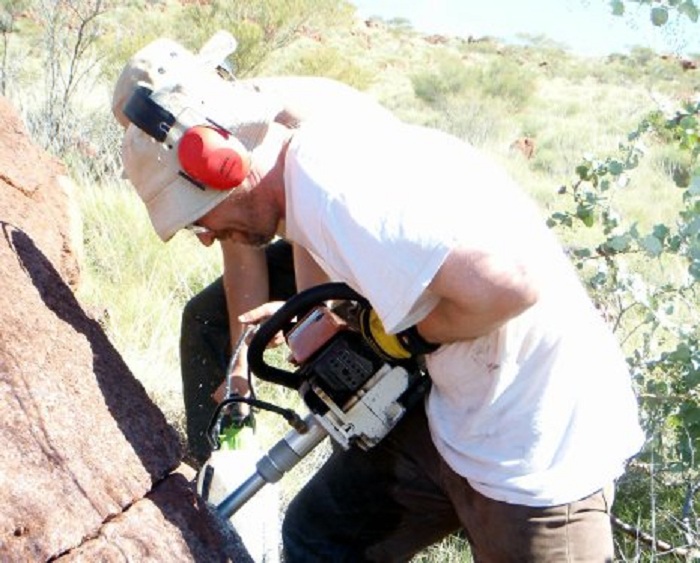 HOUGHTON — Old rocks hold on to their secrets. Now, a geophysicist at Michigan Technological University has unlocked clues trapped in the magnetic signatures of mineral grains in those rocks. These clues will help clear up the murky history of the Earth’s early core.

The journal Earth and Planetary Science Letters published a paper on the subject earlier this year. Aleksey Smirnov, an associate professor of geophysics and adjunct associate professor of physics at Michigan Tech, led the study. The work is a part of a large research program led by Smirnov and supported by the National Science Foundation, including his CAREER Award, a prestigious NSF grant. Through this work, he has traveled the world seeking rocks that provide insight into the ancient earth’s core.

The magnetic field comes from the earth’s core — the solid inner core, made of iron, spins and powers convective currents in the liquid outer core. Those currents create the magnetic field, and the system is called the geodynamo.

“At any point, the field can be described by its direction and strength,” Smirnov said, adding that the modern magnetic field is weaker than that of a refrigerator magnet and that intensity has changed throughout geologic time. “What we call paleointensity in our paper refers to the field’s strength.”

Smirnov and his co-author, David Evans of Yale University, examined the paleointensity measurements of rocks more than two billion years old. Rocks that old record a magnetic field from a rather mysterious geodynamo. That’s because the core didn’t always have a solid center — it used to be all liquid. And being liquid would make for a weak, chaotic magnetic field.

“What happened at some point, because the earth is constantly cooling, the center formed a small, solid inner core,” Smirnov said. “But this event is uncertain in terms of timing.”

A number of models analyze what this timing could have been, but they estimate any time between half a billion years ago and three billion years ago — which is like saying an adolescent will hit puberty sometime between ages 8 to 30. To better pinpoint the timing of the inner core’s formation, Smirnov scours the world for old Precambrian rocks.

Smirnov focuses on rocks that are not just old, but magnetic, and he tests the samples in the Earth Magnetism Lab at Michigan Tech. Within the lab is a room, built above the concrete floor and boxed in with a special steel alloy — it’s a metal-free zone. Inside the room, Smirnov uses a magnetometer: a device that measures magnetic properties in rocks and, more specifically, their iron-rich minerals.

Magnetite is an iron silicate with magnetic properties, and when it crystallizes in a rock, it records the strength and orientation of the earth’s magnetic field. Some rocks record this better than others; an ideal rock cools fast and is well-preserved.

“Because of the rarity of well-preserved extrusive Precambrian rocks,” Smirnov wrote in his paper, “relatively quickly cooled shallow intrusions such as mafic dikes and sills represent an attractive alternative target for paleointensity studies.”

The rocks Smirnov and his team sampled in Australia’s Widgiemooltha dike swarm are the best available, considering the cluster of intrusive rock formations has been eroded, buried and baked over the past two billion years. The dike swarm is important because the Widgiemooltha rocks, collected from 24 different field sites, contain key magnetite grains. After some time in the lab’s magnetometer, the minerals begin to reveal their long-held magnetic secrets.

Basal Mantle Ocean and Beyond

“This contradicts the models that show a young solid inner core — and right now, that’s a mystery,” Smirnov said. Although, he adds, there is a new theory that is consistent with this data.

In the basal mantle ocean theory, the boundary between the solid mantle — the bulk of earth’s interior — and the early earth’s core could have been swaddled in a dense layer of partially melted rock. The difference in composition and density could have been enough to jumpstart a stronger magnetic field.

Delving deeper into the core’s evolution has significance beyond the earth’s interior, too. The magnetic field helps protect life on earth from cosmic radiation. Understanding the ancient geodynamo could also expand our knowledge of earth’s earliest life. Smirnov plans to study that connection — and more exceptionally old rocks — in the next leg of his research.