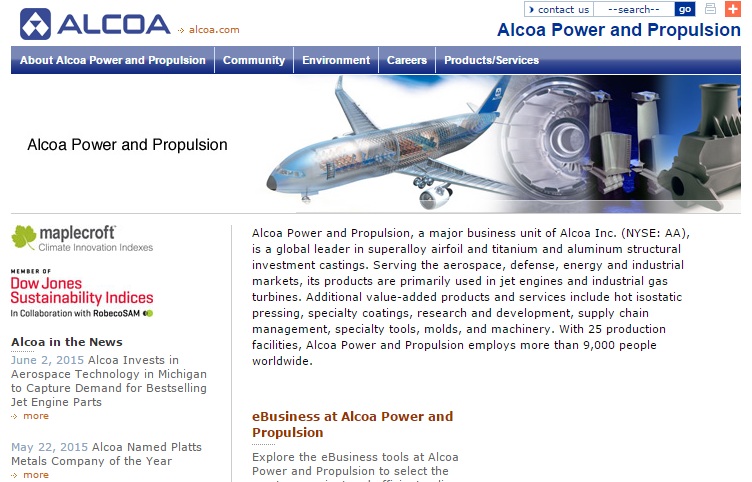 NEW YORK CITY — Alcoa Inc. announced Tuesday that it would invest $22 million in new production technology at its advanced metals plant in Whitehall, near Muskegon.

The company said the investment is a result of growing demand for advanced titanium, nickel and 3D-printed parts for jet engines.

Jarrault said the company is also adding capacity at plants in LaPorte, Ind. and Hampton, Va.

Alcoa’s process, called hot isostatic pressing, or HIP, involves the simultaneous application of high pressure and temperatures to significantly improve the mechanical properties and quality of cast products, such as blades and structures for jet engines. In addition, the process increases the density of 3D-printed parts made using powdered metals, improving product consistency, strength and lifespan. All titanium, 3D-printed and some nickel parts used for jet engines are treated using the HIP process.

Alcoa already owns and operates one of the world’s largest HIP technology complexes for aerospace. This investment will expand Alcoa’s capabilities further, enabling it to process its largest jet engine parts in-house. With this investment, Alcoa will be able to process any cast jet engine product in its current portfolio.

Alcoa expects the new technology will be ready for product qualification in 2016. Alcoa’s eight other HIP production systems are also located in Whitehall, where it has a concentration of engineering and technical resources. Alcoa pioneered this technology in the aviation industry in 1973, and moved its first unit from Battelle Laboratory to Whitehall in 1975.

The city of Whitehall has also approved a 12-year property tax break for the project valued at over $1 million.

Alcoa said it expects robust global aerospace sales growth of 9 to 10 percent in 2015 driven by strong deliveries across the large commercial aircraft, regional jet and business jet segments and sees a current 9-year production order book at 2014 delivery rates. Alcoa Power and Propulsion is expected to generate $2.2 billion in revenues by 2016 as a result.