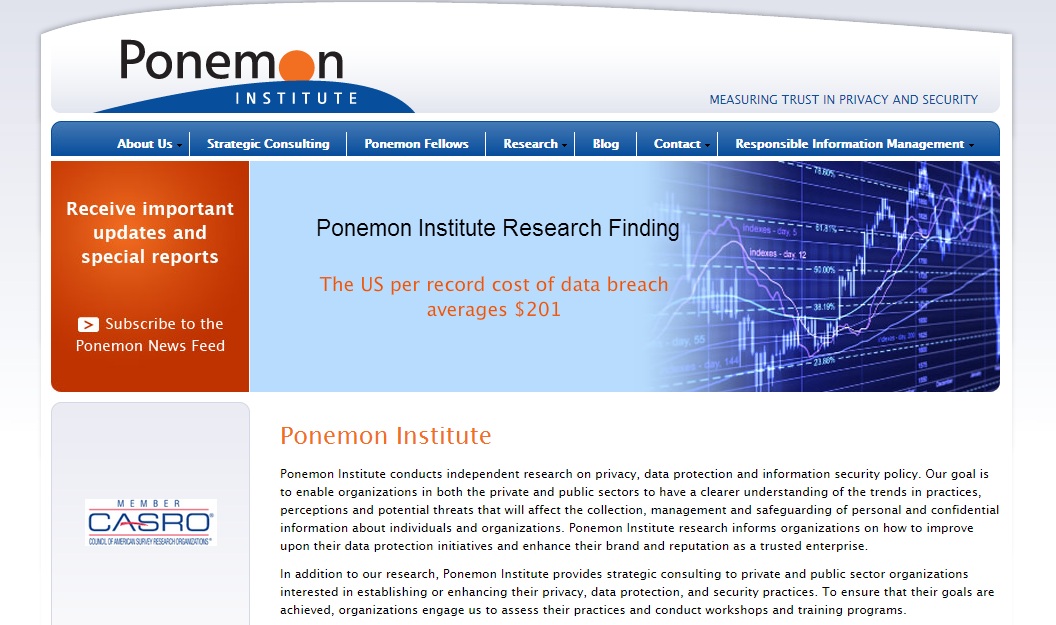 TRAVERSE CITY — The cost of the average corporate data breach has risen 23 percent over the past year to $3.8 million, according to the latest Cost of Data Breach Study conducted by the Traverse City-based Ponemon Institute and sponsored by IBM.

The benchmark study of 350 companies in 11 countries also found that the average cost incurred for each lost or stolen record containing sensitive and confidential information increased 6 percent to $154.

“Based on our field research, we identified three major reasons why the cost keeps climbing,” said Dr. Larry Ponemon, chairman and founder of the Ponemon Institute. “First, cyber attacks are increasing both in frequency and the cost it requires to resolve these security incidents. Second, the financial consequences of losing customers in the aftermath of a breach are having a greater impact on the cost. Third, more companies are incurring higher costs in their forensic and investigative activities, assessments and crisis team management.”

The first Cost of Data Breach study was conducted 10 years ago and was limited to the United States. Since then, the research has expanded to 11 countries. Ponemon Institute’s Cost of Data Breach research is based on actual data of hundreds of indirect and direct cost categories collected at the company level using field-based research methods and an activity-based costing framework. This approach has been validated from the analysis of more than 1,600 companies that experienced a material data breach over the past 10 years.

The 2015 research involved the collection of detailed information about the financial consequences of a data breach. For purposes of this research, a data breach occurs when sensitive, protected or confidential data is lost or stolen and put at risk. Over a 10-month
period, Ponemon Institute researchers conducted more than 1,500 interviews with IT, compliance and information security practitioners representing 350 organizations in the U.S., the United Kingdom, Germany, Australia, France, Brazil, Japan, Italy, India the Arabian region (a consolidation of organizations in the United Arab Emirates and Saudi Arabia), and, for the first time, Canada.

Key findings in the study include:

Board level involvement and the purchase of insurance can reduce the cost of a data breach. For the first time, we looked at the positive consequences that can result when boards of directors take a more active role when an organization had a data breach. Board involvement reduces the cost by $5.50 per record. Insurance protection reduces the cost by $4.40 per record.
Business continuity management plays an important role in reducing the cost of data breach. The research reveals that having business continuity management involved in the remediation of the breach can reduce the cost by an average of $7.10 per compromised
record.
The most costly breaches continue to occur in the U.S. and Germany at $217 and $211 per compromised record, respectively. India and Brazil still have the least expensive breaches at $56 and $78, respectively.
The cost of data breach varies by industry. The average global cost of data breach per lost or stolen record is $154. However, if a healthcare organization has a breach, the average cost could be as high as $363, and in education the average cost could be as high as $300. The lowest cost per lost or stolen record is in transportation ($121) and public sector ($68).
Hackers and criminal insiders cause the most data breaches. Forty-seven percent of all breaches in this year’s study were caused by malicious or criminal attacks. The average cost per record to resolve such an attack is $170. In contrast, system glitches cost $142 per record and human error or negligence is $137 per record. The US and Germany spend the most to resolve a malicious or criminal attack ($230 and $224 per record, respectively).
Notification costs remain low, but costs associated with lost business steadily increase. Lost business costs are abnormal turnover of customers, increased customer acquisition activities, reputation losses and diminished good will. The average cost has increased from $1.23 million in 2013 to $1.57 million in 2015. Notification costs decreased from $190,000 to $170,000 since last year.
Time to identify and contain a data breach affects the cost. For the first time, our study shows the relationship between how quickly an organization can identify and contain data breach incidents and financial consequences. Malicious attacks can take an average of 256 days to identify while data breaches caused by human error take an average of 158 days to identify.

Predicting the Likelihood of a Data Breach

For the second year, the research looks at the likelihood of a company having one or more data breaches in the next 24 months. Based on the experiences of companies participating in this research, the probability is based on two factors: how many records were lost or stolen and the company’s industry. According to the findings, Brazilian and French companies are more likely to have a data breach involving a minimum of 10,000 records. In contrast, organizations in Germany and Canada are least likely to have a breach. In all cases, it is more likely a company will have a breach involving 10,000 or fewer records than a mega breach involving more than 100,000 records.