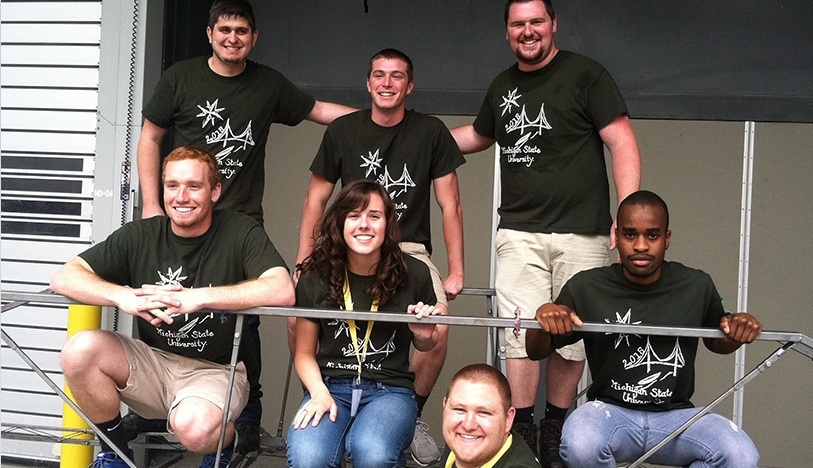 EAST LANSING — The Spartan Spanners finished 12th in the national championship of the Student Steel Bridge Competition, May 22-23.

The Michigan State University College of Engineering was among 47 teams from the U.S. and Canada that qualified for the national competition at the University of Missouri in Kansas City.

The Spartan Spanners finished first in the North Central Region at the University of Toledo on April 10 to advance to the national competition. It is the third year in a row MSU has won the region, which includes nine universities from Michigan and Northern Ohio. Michigan Technological University in Houghton also qualified for the national finals by finishing second regionally. The Michigan Tech team finished in 28th place at nationals.

MSU team advisor Frank Hatfield said the national contest is the culmination of a highly competitive regional competition that included 224 universities competing in 18 regions in 2015.

“Most teams were from the United States, but there were some from China, Canada, and Mexico,” Hatfield said. “This year’s MSU Steel Bridge Team was a truly great team in many ways.”

The Spartan Spanners spent months designing, cutting, drilling, and welding their project to produce a steel bridge that weighs only 136 pounds.

This year’s national champions were from the University of Florida in Gainesville, followed by California Polytechnic State University at San Luis Obispo, and École de Technologie Supérieure in Montreal, Quebec, Canada.

With 224 teams having competed in regional conferences, Hatfield said MSU’s 12th place national finish puts it in the top 5 percent in the nation.

The Student Steel Bridge Competition is an international competition that challenges civil engineering students to design, fabricate, and erect a 20-foot long steel bridge to support 2,500 pounds. Bridges come to the contest in three-foot long pieces and must be assembled without stepping in an imaginary river. Organizing sponsors of the Student Steel Bridge Competition are the American Institute of Steel Construction and the American Society of Civil Engineers.

See a video of MSU’s 2015 team build their bridge at this YouTube link.