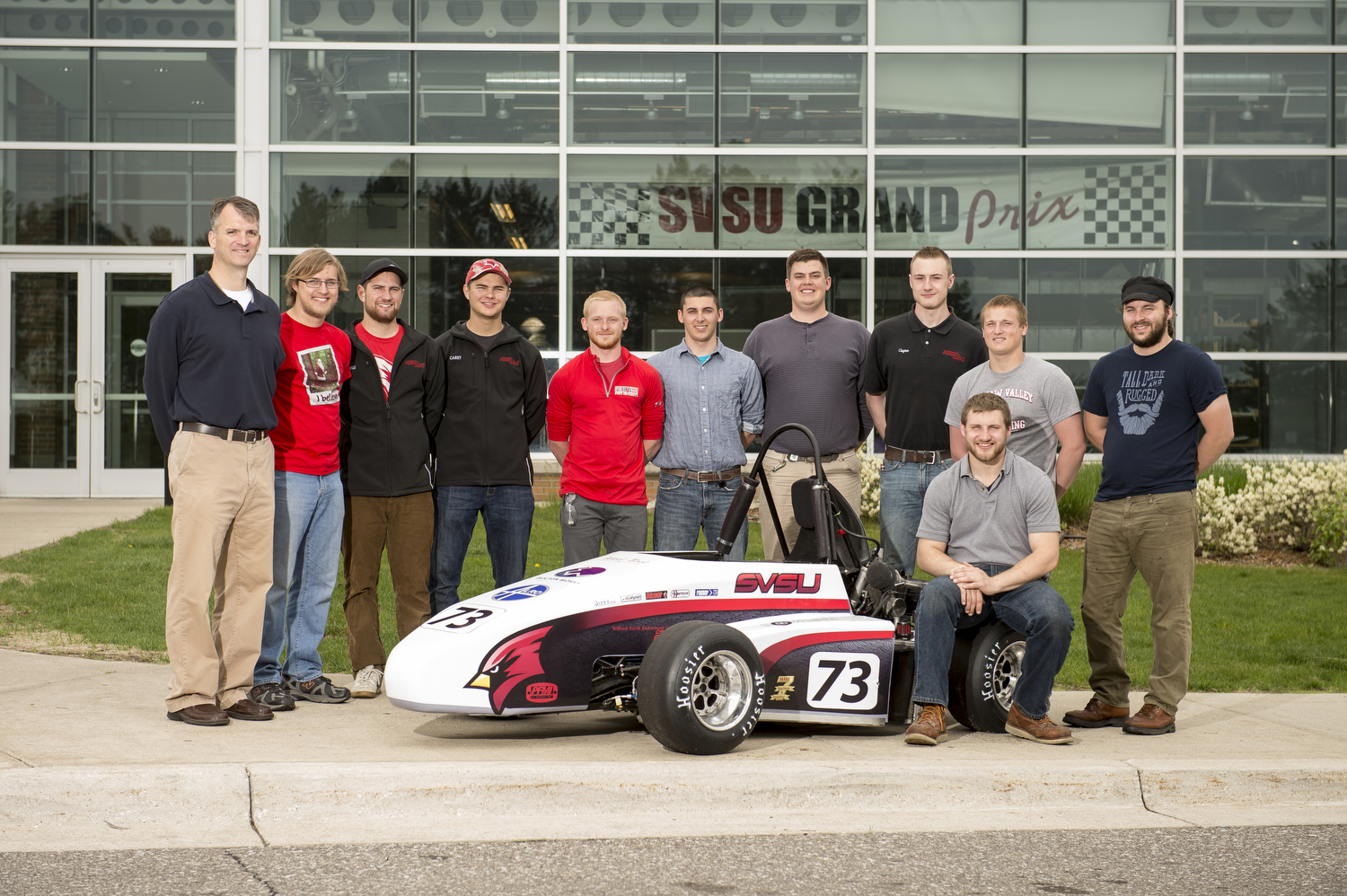 UNIVERSITY CENTER — Fresh off building the fastest college race car in the world last year, Saginaw Valley State University’s Cardinal Formula Racing has designed and built “one of the most well-developed vehicles” in the accomplished program’s history and is preparing to square off against top international competition.

Brooks Byam, SVSU professor of mechanical engineering and the team’s faculty adviser since 1998, has high hopes for No. 73 – the name of this year’s student-built Indy-style vehicle – on the eve of the annual Formula Society of Automotive Engineers Collegiate Design Series. A team of 20 SVSU students who designed and built No. 73.

The competition is May 14-16 at Michigan International Speedway in Brooklyn.

“They’re ready for competition,” Byam said. “It’s the most thoroughly-tested vehicle we’ve taken down there.”

That is saying a lot considering SVSU’s success in the college racing circles over the years. Byam himself is the 2013 winner of the Carroll Smith Mentor’s Cup from SAE, the top honor given to faculty who advise college formula racing programs.

The annual Formula SAE Collegiate Design Series competition features about 120 teams, from world-renowned colleges and universities with esteemed mechanical engineering programs. As with previous competitions, this year’s event will feature teams squaring off in categories such as design, cost, endurance and acceleration.

How will SVSU’s team fare this year?

“They just have to pay attention to details, follow through and finish,” Byam said. “With a little good luck, we’ll finish pretty well.”

Byam said the vehicle’s well-developed status is a result of hard work on behalf of students as well as experienced guidance from their advisers. The group’s other faculty advisers are Erich Paul Heuschele, adjunct instructor of engineering, and Mark McCartney, professor of accounting.

“We’ve gotten to a point where we are good at explaining the right approach and the right culture to have around the team, and the students are buying into that,” Byam said. “They have the confidence that what they are doing is the right thing.”

He also praised the dedication of the team.

“I’ve been trying to tell them to take a few days off, get some sleep, celebrate Mother’s Day, just take a break,” Byam said. “They can’t seem to take their hands off (the car).”

The team roster is comprised of largely mechanical engineering students, including team captains Alex Fullerton of Onaway; Zach Haveraneck of Saginaw; and Logan Shelagowski of Mattawan.

Byam thanked SVSU and Cardinal Formula Racing’s sponsors for their support of the program.

“Without that, we’re nothing,” he said. “Part of our culture is appreciating the extraordinary support we get.”