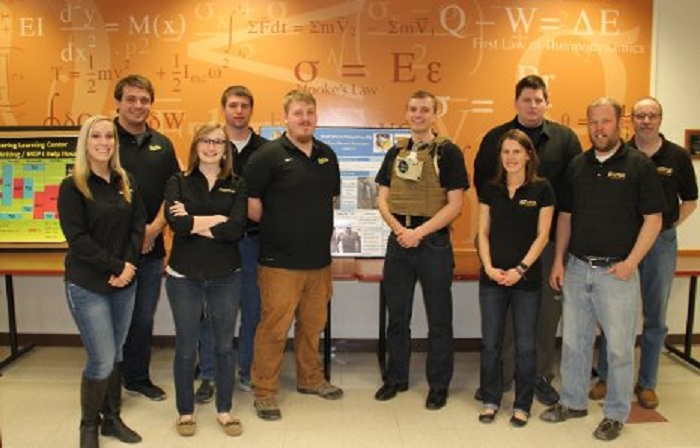 HOUGHTON — It’s hot in the desert, where many American military men and women serve. By designing a cooling apparatus to wear in such climates, one of Michigan Technological University’s Mechanical Engineering Senior Design teams may help countless suffering soldiers.

The Michigan Tech team competed with 15 other universities and three military service academies. As the top-ranked team, they brought home a traveling trophy — theirs to keep until next year’s competition — and the satisfaction of knowing that their work may someday help soldiers serving in difficult circumstances overseas.

The heat stress prevention kit they developed includes a small fan that blows air through a soldier’s gear, using separation pads under their armor to help the air circulate and force evaporation to cool them more efficiently. A YouTube video made by the students explains how it works.

Team member John Schuman has an insider’s appreciation for the project. He served for four years as an infantryman in the U.S. Marine Corps, including a deployment to Iraq.

“I had experienced combat situations in extremely hot conditions,” Schuman said. “The challenge was how to make a device that could actually keep someone cool in one of the hottest regions of the world, but be small and light enough that it could easily integrated into the operator’s current combat equipment. These troops already are carrying 90 to 130 pounds of equipment, so it was crucial to keep the size and weight down.”

The device the team came up with uses current battle gear and the body’s natural cooling mechanism, enhancing each to help cool the person.

“It’s something I wish I’d had while I was overseas,” Schuman said. “It is one less thing a soldier, sailor, airman or Marine has to worry about while on a combat patrol.”

Rizzo, an AFROTC cadet, says she was passionate about the project from the beginning.

“The product we developed has a direct impact on battlefield airmen, a highly trained group of airmen who put their duty above all else when accomplishing a mission,” she said. “The majority of these troops are currently deployed in hot, arid and humid environments. Along with the environmental conditions, they are required to execute high-intensity, 24-7 job functions, carrying hundreds of pounds of equipment, and are usually responsible for not only their own lives, but the lives of civilians, other airmen and even the enemy.”

Rizzo added that “Although I will be receiving my commission as an aircraft maintenance officer, I was greatly humbled and honored to be able to use my degree to help my wingmen for this challenge. Whether the AFRL chooses to prototype our design or simply uses the data and calculations to formulate their own, my team and my university has helped these airmen combat heat-related issues and continue in their essential missions.”

Bill Endres, Senior Capstone Design Program director and associate professor of mechanical engineering-engineering mechanics, said: “We are in good company with the other schools in the challenge,” which included the Air Force, Army and Naval academies, Purdue, Ohio State, Colorado State, Johns Hopkins, Auburn and other familiar names. “We are in company that is hard to describe in words when looking at those amazing men who serve in the battlefield, as well as the civilian servants who support the warfighters with dedication and passion.”