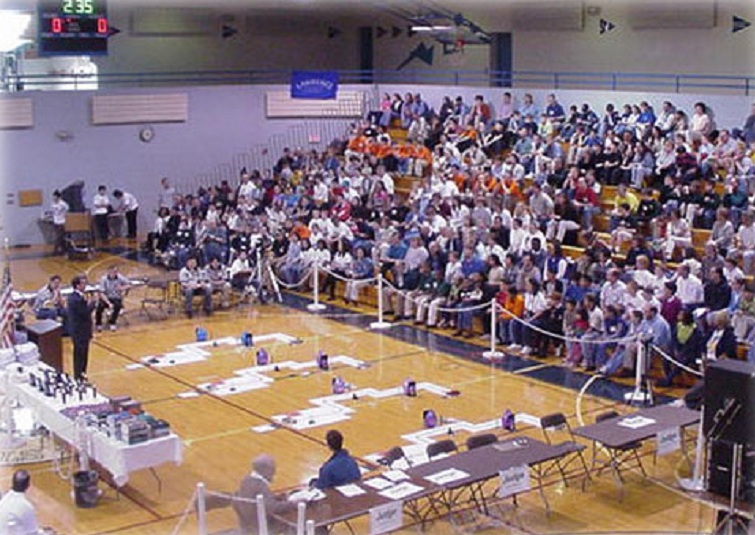 SOUTHFIELD — Eighty robotics teams that have advanced from nine Michigan qualifying events will compete in the Robofest Michigan Championship at Lawrence Technological University on Saturday, May 2.

The opening ceremony in the Ridler Field House on the campus at 21000 West 10 Mile Road will be at 9 a.m., and the awards ceremony will be at 4 p.m. Admission and parking are free. Spectators can register to vote for the People’s Choice Awards.

Robofest is a competition of autonomous robots — computer-programmed to act independently and not remote-controlled — that encourages students to master principles of science, technology, engineering, and math (STEM) by focusing on computer programming.

The challenge of this year’s RoboBowl game is to build an autonomous robot to detect and knock down four “pins” (water bottles) by bowling tennis balls. In addition, the robot has to measure the height of the black rectangle shape on the table.

Teams that win at the Michigan championship competition will advance to the 2015 Robofest World Championship, which will also be held at LTU, on Saturday, May 16. Nearly 2,000 students from a dozen states and eight other countries are in the Robofest program this year.

Go to http://robofest.net for details.

Lawrence Technological University, www.ltu.edu, is a private university founded in 1932 that offers more than 100 programs through the doctoral level in its Colleges of Architecture and Design, Arts and Sciences, Engineering, and Management. Activities on Lawrence Tech’s 102-acre campus include over 60 student organizations and NAIA varsity sports.