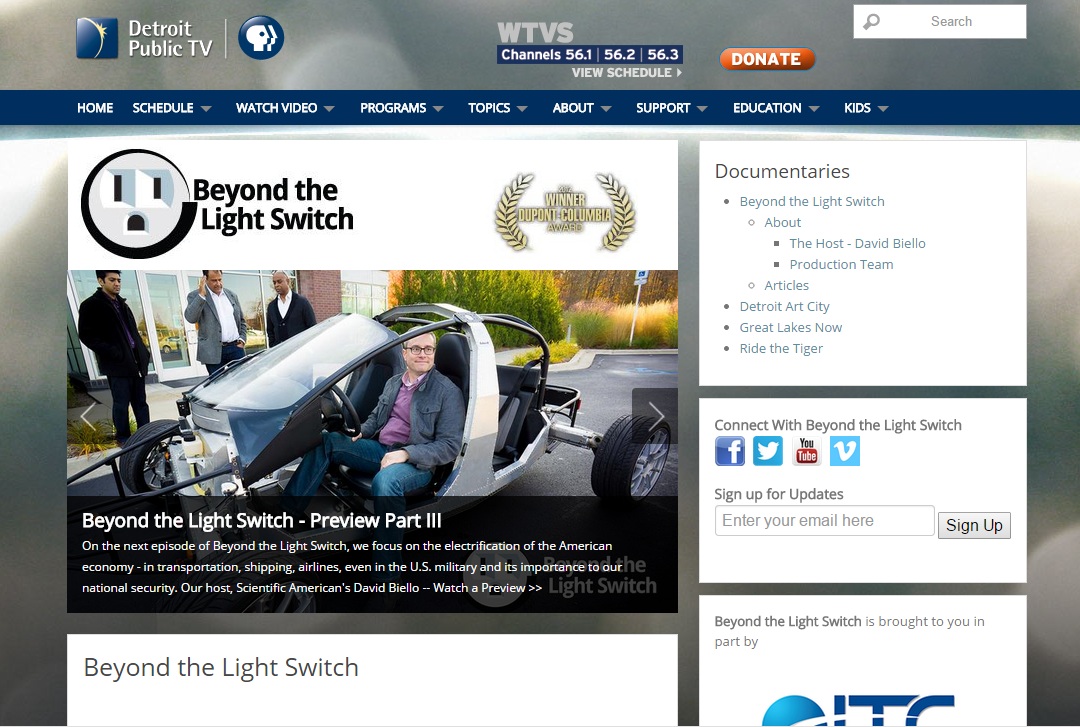 WIXOM — Detroit Public Television’s award-winning energy series, “Beyond The Light Switch,” is returning on Earth Day, Wednesday, April 22, with a look at how shifts in thinking about energy use are taking place in institutions as disparate as the United States military, businesses and communities.

The show is scheduled to air at 9 p.m.

The show will cover how the energy demands to help fuel Americans’ busy lives are impacting our economic and environmental security and, in some cases, jeopardizing the lives of our military men and women on the frontline. And it will cover the new ideas and products that could help reduce our energy use by relying on alternative sources of electrification.

Host David Biello, energy and environment editor at Scientific American, talks to soldiers who have been on the frontline in Iraq about the dangers they faced while transporting diesel fuel to forward operating bases. From there, Biello heads to the Pentagon and then to two of the country’s busiest transportation hubs: the Port of Los Angeles and Atlanta’s Hartsfield-Jackson International Airport.

Along the way, he meets with researchers at the Argonne National Lab near Chicago and an upstart lab near Oakland, Calif., as well as the X-Prize winner, Edison2, and their next-generation electric vehicle, and visits the Mueller neighborhood in Austin, Texas, where residents are pioneering a new way of life.

“It’s arguable that energy is one of just a few things absolutely critical to our modern way of life,” said Beyond The Light Switch producer Ed Moore. “What we try to do with the Light Switch series, and I think we’re succeeding, is taking all these important fragments of energy news that seem disconnected and connect them for the viewer. For instance, this new episode is very much about movement — the movement of goods, of people and of data — the things that make our economy go and maintain our quality of life require a lot of energy.”

Winner of the DuPont-Columbia University award for outstanding journalism, Beyond the Light Switch episodes 1 and 2, which will also air on April 20 starting at 10 p.m., take viewers on an enlightening and comprehensive journey of discovery into the inner workings of our existing energy infrastructure. Guided by an independent advisory panel, Beyond the Light Switch investigates whether the United States can completely transform its existing energy landscape before it’s too late.

Detroit Public TV’s WTVS is a non-commercial, viewer-supported PBS member TV station serving the nation’s 11th largest TV market, with 1.5 million weekly viewers in Southeast Michigan and 1.2 million weekly viewers across Canada. DPTV offers programming related to health and the environment, public affairs, arts and culture, and children. It is also a leading national producer and distributor of programming for Public Television, and winner of a 2012 Alfred I. DuPont-Columbia Award, as well as the only dual PBS licensee / entertainment label in the country, operating as DPTV Media. For more information, visit www.dptv.org.