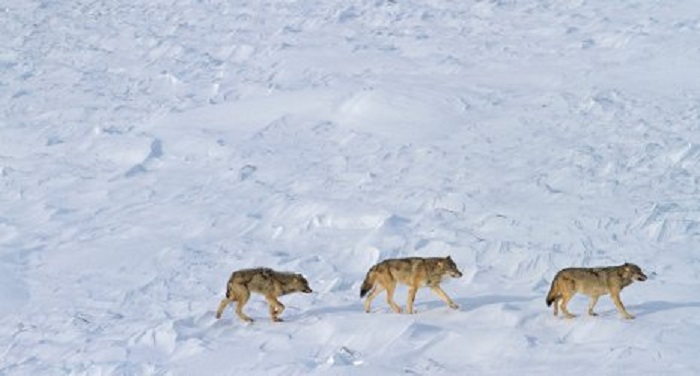 HOUGHTON — Michigan Technological University researchers who have been observing the wolf pack on Isle Royale since 1959 say just three wolves apparently survive on the national park in Lake Superior.

The study is the world’s longest-running study of predator and prey — the wolves and the island’s moose herd, on which the wolves feed.

This year, along with the three resident wolves, scientists estimated 1,250 moose on the island and observed two visiting wolves, which came and then left across an ice bridge to the mainland. This growing gap between the predator and prey populations is a trend that Michigan Tech researchers have tracked over the past four years.

“It’s not the presence of wolves that matters so much, it’s whether wolves are performing their ecological function,” says John Vucetich, an associate professor of wildlife ecology, who leads the study along with Rolf Peterson, a research professor at Michigan Tech.

Last April, national park staff released a statement concerning wolf intervention options. Part of the statement reads: “There is still a chance of nature replenishing the gene pool as wolves are able to move to and from the island when ice bridges form.”

But with only three wolves remaining, Vucetich says, “There is now a good chance that it is too late to conduct genetic rescue.” He also points out that one of the Isle Royale wolves left on an ice bridge last winter, and this winter, two wolves visited the island and promptly traveled back over the ice bridge.

To understand Isle Royale wolves, you have to understand their genetics. Inbreeding has greatly impacted the packs over the past half century, which is clear with the three remaining wolves.

The group is most likely made up of two adults and one nine-month-old pup, possibly the adult pair’s offspring. But unlike its pack mates, the pup does not appear healthy. It has a constricted waistline, hunched posture and seems to have a deformed tail, the researchers said.

“Those observations suggest that the pup is not well off,” Vucetich says, noting that on the last day of the study, Peterson had found the two adult wolves, but not the pup. “It would not be surprising if the pup was dead a year from today.”

Even if the pup were healthy, it would not necessarily be a promising sign. In the case of wolves, three is not a crowd. Such low numbers make the population’s natural recovery unlikely. The wolves’ numbers started plummeting in 2009, declining by 88 percent from 24 to 3 wolves, which Vucetich and Peterson think is a result of inbreeding. All geneticists who have studied the current situation agree that recovery is unlikely without new genetic material.

With that in mind, even if the surviving adults are a mating pair, their offspring probably would not fare well. While the researchers are waiting on genetic tests to confirm the wolves’ identities and which pack they came from, their best guess is that they are the alpha pair from West Pack. And, as a mating pair, neither is likely to be interested in other potential mates introduced for genetic rescue.

Looking for wolves in winter is challenging, Vucetich says, describing how he spends hours looking out a small plane window, searching for tracks or subtle signs. One day this winter, the work paid off in an unexpected way.

“I could see these two wolves, they were on top of a ridge, curled up in tight little balls,” Vucetich says, explaining that the wolves were asleep. “And wolves can sleep for quite some time, so we circled for a bit and decided to come back later.”

Of course, when Vucetich and the pilot came back, the wolves had trotted off. But based on the tracks and the geography of Isle Royale, Vucetich says it was easy to guess the wolves’ preferred travel route. They found the canines skirting the shoreline soon after.

One wolf appeared light-colored, which is uncharacteristic of Isle Royale wolves, and the other was radio collared. They were visitors who had crossed an ice bridge from the mainland, where the Grand Portage Band of Lake Superior Chippewa had collared the wolf.

But they didn’t stay long. Within the week, the wolves left, traveling back across the ice bridge.

“Everyone wants to know: What does this mean?” Vucetich asks. The answer is unclear, despite the fact that visiting wolves raise hopes for saving the population. Vucetich and Peterson write in their report that even “if the visiting wolves had been aware of the presence of Isle Royale wolves, it is far from certain that genetic rescue would have occurred.”

The remaining two options, then, are to reintroduce wolves to the island or do nothing and see what happens naturally.

“One must use the word ‘naturally’ carefully these days,” Peterson said. “The human imprint is written all over the dynamics of this wolf population in recent decades.”

A case in point, he said, is the downward trend in the frequency of ice bridges in winter, which formerly allowed wolves with new genetic material to make their own way to Isle Royale.

Along with wolves, the other iconic animals of Isle Royale are moose. And unlike their canine predators, and in spite of several harsh winters, the moose population has been growing annually at 22 percent for each of the past four years.

“If that was money in the bank, you’d get rich in a hurry,” Vucetich says. “Soon we’ll be moose rich.”

While iconic, a proliferation of moose could actually be harmful and, if this trend continues, the population could reach past heights like in 1996.

“At that time the moose population had considerable impact on forest vegetation,” Vucetich and Peterson write in the Winter Study annual report. “Concerns remain that the upcoming increase in moose abundance will result in long-term damage to the health of Isle Royale’s vegetative community.”

The balance of predator-prey on Isle Royale has clearly tipped. The question remains what actions humans will or will not take to influence that scale.

The annual report is available at www.isleroyalewolf.org

More about Michigan Tech at www.mtu.edu.