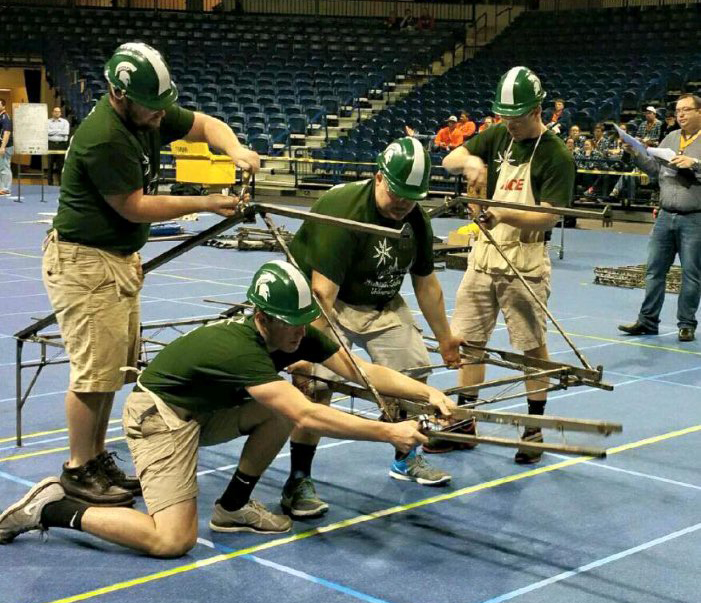 EAST LANSING — The Spartan Spanners of the Michigan State University College of Engineering took first place overall honors in the 2015 North Central Student Steel Bridge Competition. It was the third consecutive year the MSU bridge-building team won regionals, giving them the right to advance to nationals.

In addition to overall first place, the Spartan Spanners had the lightest and most structurally efficient bridge, and were second in construction speed and economy.

The University of Toledo hosted the 2015 competition last weekend. Nine universities from Michigan and Northern Ohio competed in the North Central region.

The Spartan Spanners spent months designing, cutting, drilling, and welding their project to produce a steel bridge that weighs only 136 pounds and was constructed on-site by four builders in little more than 13 minutes. The team’s advisor is Frank Hatfield, Ph.D., PE, emeritus professor of civil and environmental engineering at MSU.

Video of the Spartan Spanners is available at this link.

The Student Steel Bridge Competition challenges civil engineering students to design, fabricate, and erect a 20-foot long steel bridge to support 2,500 pounds with minimum sag. Bridges come to the contest in three-foot long pieces and must be assembled without stepping in an imaginary river. Bridges are judged on a variety of qualities, including lightness, economy, appearance and various measures of strength and stability.

The competition is sponsored by the American Institute of Steel Construction and the American Society of Civil Engineers.

The regional contest is part of the National Concrete Canoe Competition that provides students with a practical application of the engineering principles they learn in the classroom, along with team and project management skills they will need in their careers. The event challenges the students’ knowledge, creativity and stamina, while showcasing the versatility and durability of concrete as a building material. The organization’s first national concrete canoe contest was hosted in East Lansing by MSU in 1988.