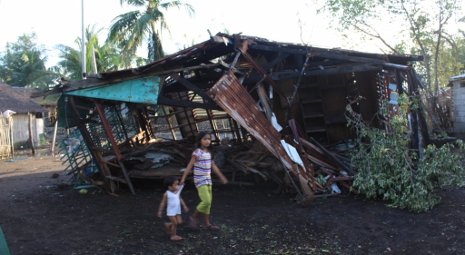 HOUGHTON — Weather disasters rarely hit the Upper Peninsula. Sure, snow falls in abundance, but that’s nothing compared to the devastation weather wreaks in other parts of the world.

However, two Michgian Technological University students in its Peace Corps Master’s International (PCMI) program lived through 2015’s deadly Cyclone Pam, as well as Typhoon Yolanda in 2013, when those storms struck the countries where they were doing Peace Corps service.

Tim Ward, a PCMI computer science student serving in Vanuatu, was evacuated to Australia by the Peace Corps just before Cyclone Pam hit in mid-March. Experts are still surveying the damage of a category 5 storm’s direct hit on this island nation, while Ward waits to return to Vanuatu to help in any way he can.

Dave Fenlon also knows firsthand the destruction these kinds of storms can wreak. He’s a PCMI student stationed in Sagay City, Philippines, and during his time there, he’s survived two typhoons and helped the people rebuild.

Typhoon Yolanda (internationally, Haiyan) swept directly across the middle of the Philippines and made landfall in early November 2013 in the east near Tachloban City, passing very near Fenlon in Sagay.

“I happened to be a couple hours south of my town with my sister who was on vacation visiting when the storm hit,” Fenlon said. “Upon returning the next day, we had trouble finding my house as all the fences and many of the neighboring homes were collapsed. I had to look for other concrete homes, like my own, as landmarks.”

The event brought widespread destruction to the homes of thousands, but Fenlon says the Filipino people have an indomitable spirit.

“When I arrived just hours after the storm had subsided, my neighbors were already removing the fallen trees and debris from the area and had begun rebuilding their homes,” he recalls. “As I walked through my neighborhood taking pictures, many posed in front of the remains of their homes with grins from ear to ear and flashed thumbs up, astonishing me.”

Their attitude after the storm was not a reaction Fenlon was used to.

“Coming from Michigan, I of course had never experienced a storm close to the intensity and duration of a tropical typhoon,” says Fenlon. “Typhoon Yolanda was the strongest storm to ever make landfall in recorded history, with sustained winds of over 200 mph. Take a moment and just try to imagine that. Nothing can withstand such force — even palm trees were stripped bare.”

Fenlon is originally from Traverse City and graduated from Michigan Tech with a bachelor’s degree in biological sciences, concentrating in ecology. While serving in Americorps in Arizona, he heard about Michigan Tech’s Biological Sciences PCMI program that included concentrations such as environmental education.

Michigan Tech offers PCMI programs in 10 departments (more at www.mtu.edu/peacecorps). The students combine a master’s degree with Peace Corps service. Michigan Tech is the nation’s largest Master’s International campus, and Michigan Tech students have served in 52 countries around the world.

“Most students serve their two years in Peace Corps very peacefully, while others encounter difficult situations — natural disasters like Fenlon and Ward or on occasion, political instability,” said Kari Henquinet, director of the PCMI program at Michigan Tech. “The Peace Corps as an organization is very safety conscious and well-informed about in-country situations, therefore handling all of the logistics of instructing volunteers of what to do in a crisis. Michigan Tech really relies on Peace Corps to lead in all of these situations, and then we work with our students to help them adapt to the circumstances and find a way to complete their research and degree program.

Fenlon said, “The PCMI program seemed like the perfect opportunity to combine both a strong desire to work and live abroad into an experience unattainable by merely continuing my education stateside.”

Although his first choice for assignment was Latin America — due to his experience in Costa Rica for his international Spanish minor — Fenlon ended up in Southeast Asia.

“Given the choice, I would have picked a country in Latin America over the Philippines, but looking back on the past two-plus years of service, I wouldn’t change a thing,” he said.

He arrived in the Philippines July 2012 and was originally due back in September 2014, but he filed for an extension and is now leaving in October 2015. That’s 40 months altogether.

He has tried to branch off and start a couple of his own initiatives. During his first year, he focused primarily on assisting an ecotourism livelihood project on Suyac Island. The tiny island is covered by dense mangrove forests that date back centuries and is home to about 500 people who are largely subsistence fishermen and their families. The ecotourism project’s goal was to encourage continued protection of the mangroves by creating a simple “ecopark” out of bamboo and training some of the community members to be tour guides and cooks, preparing fresh seafood for tourists.

“I was asked to help improve community members’ ability to be effective tour guides by giving simple trainings on English phrases they might use to communicate with foreign tourists,” Fenlon said. “I also worked with the kids who had been organized into a environmental club called the Junior Ecopatrol. They act as environmental advocates, encouraging proper waste disposal and conservation of resources.”

Fenlon’s recent efforts have been focused on the more distant islands of Molocaboc, with about 10 times the population of Suyac — and therefore, more conservation and waste disposal issues.

“I’m in the process of obtaining grant funds to improve upon a guso farming project, with aims to provide a place to store dried products waiting to be shipped to the city,” Fenlon said.

Guso is a type of seaweed, containing compounds used for various commercial purposes ranging from cosmetics to gelatin.

“I’m a big supporter of guso as an alternative livelihood, as it is more resilient to typhoons and requires minimal effort to be profitable,” Fenlon said.

After finishing his PCMI program, Fenlon plans on returning to the Philippines to work for a non-governmental organization like RARE (www.rare.org) because of how attached and connected he feels to the people and their challenges.

“I cannot overstate how important this experience has been for me,” he said. “It has truly changed the way I look at the world, and I will no longer be able to take anything we have in the States for granted. Issues that I thought I understood relating to conservation have been shown to be far more complex than I ever could have imagined. One example of how I’ve been enlightened is the importance of the human factor — that is, the necessity to recognize and work with the needs of those who live in protected areas, not just the natural component. Lastly, I would just like to reiterate my gratitude for the Filipino people. They have humbled me with their gracious hospitality, and I feel welcomed as one of their own in my community.”