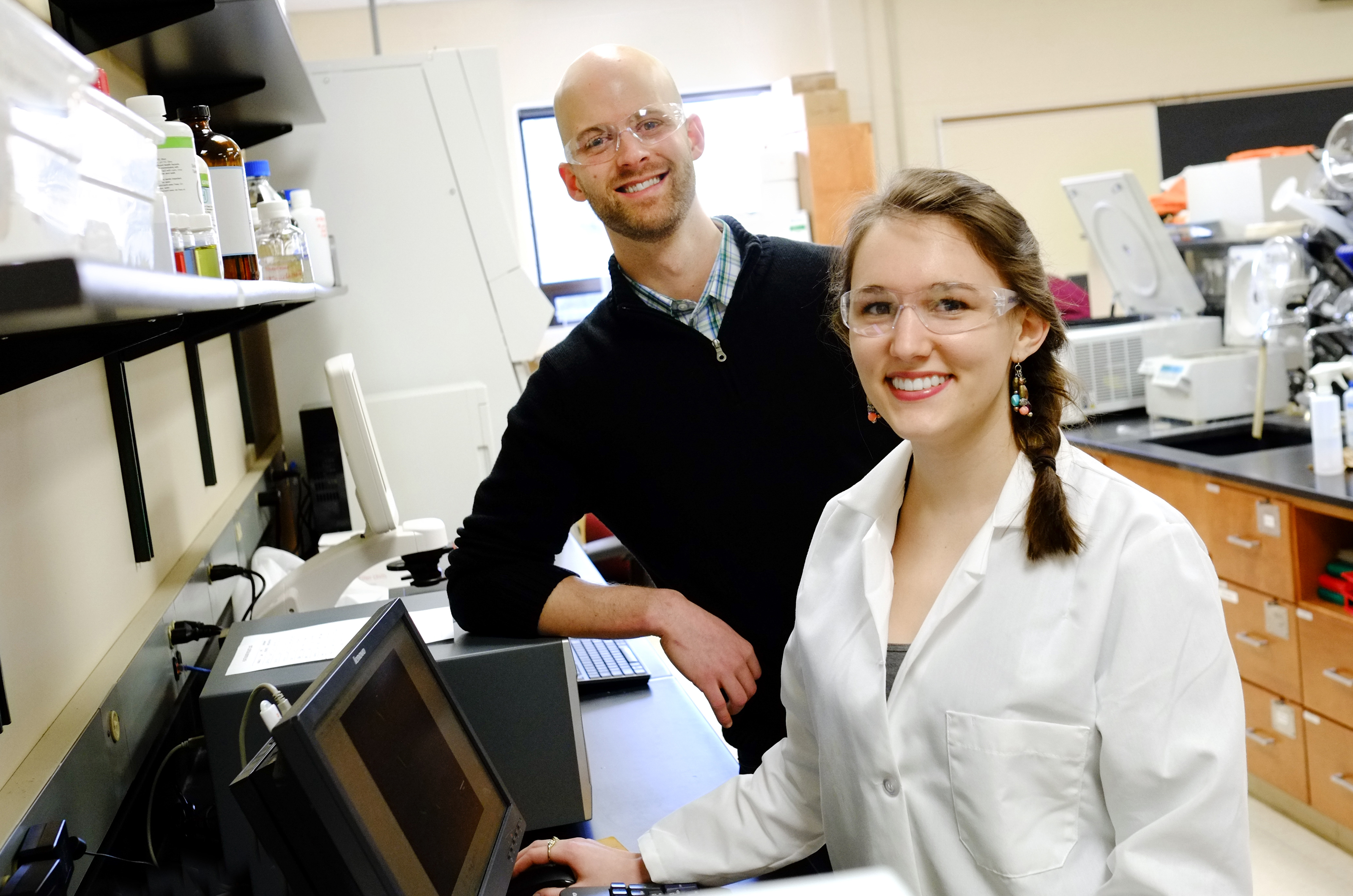 Led by Swarts, the NIH grant will support their research of Mycobacterium tuberculosis, the strain of bacteria that causes tuberculosis.

TB is a major global health issue. According to Swarts, one-third of the world’s population is infected with TB, and the emergence of drug-resistant strains of M. tuberculosis is a growing, urgent public health concern.

“Our research focus is to develop a class of molecules — derivatives of a unique sugar called trehalose — that will be useful for studying M. tuberculosis,” Swarts said. “Trehalose made by the bacteria is so important to its survival that the bacterium cannot live, or infect humans, without it. Humans, on the other hand, do not make or need trehalose, which makes the sugar derivatives very attractive targets for developing new methods of TB diagnostics and treatments.”

Overall, M. tuberculosis is the world’s deadliest bacterial pathogen with tuberculosis being the second most common cause of death from infectious disease behind HIV-AIDS. TB typically attacks the lungs but can also affect other parts of the body. It is spread through the air when people who have an active TB infection cough, sneeze or transmit respiratory fluids. General signs and symptoms include fever, chills, night sweats, decreased appetite, weight loss and fatigue.

There are approximately 10 million new cases of active TB disease and 1.5 million deaths per year, predominantly in developing parts of the world.

“As a research community, we urgently need to learn more about how M. tuberculosis infection works in order to accelerate the creation of new approaches to TB prevention and treatment,” Swarts said. “In recent decades, effective TB treatment has become difficult due to the unusual structure and chemical composition of the mycobacterial cell wall, which hinders the entry of drugs and makes many antibiotics ineffective.”

Drug-resistant tuberculosis is much more difficult and costly to diagnose and treat, calling for efforts to develop new antibiotics — and ways to deliver them — along with improved diagnostic tools that can be used in low-resource settings and alternative vaccination strategies.

“For example, we can make trehalose-based imaging probes that ‘light up’ living bacteria and may be useful for medical diagnostics in the future, helping clinicians to quickly identify TB-positive patients,” Swarts said.

He and Woodruff have successfully developed a new method of detecting the presence of M. tuberculosis, using a naturally occurring enzyme and water, for rapidly synthesizing a broad variety of trehalose derivatives. As a result, they have an unmatched ability to make and test a new class of compounds and have filed a provisional patent on their method.

Swarts said that CMU undergraduate students have been pivotal in the success of the project and the attainment of the NIH grant to keep it going. Midland junior and biomedical sciences major Bailey Urbanek was one of the lead co-authors on the initial publication of the team’s research.

Urbanek said that being included as part of the scientific writing process and the opportunity to present the research at professional meetings makes her feel that her involvement and work is having a direct impact on the global scientific community.

“I know undergraduate research isn’t a hands-on privilege at every university,” Urbanek said. “I feel that I have an advantage over my peers at other institutions, and I know that being involved in this research has been one of the most significant, influential opportunities that I have had at Central.”

The NIH grant will allow several other CMU undergraduates to join Urbanek in the lab work by funding several summer researchers for the next three years. It also provides funding support for a CMU graduate student.

In addition, the grant also will strengthen CMU scientists’ research capabilities to investigate infectious diseases because a portion of it will be used to fund equipment for a Biosafety Level 3 laboratory in CMU’s new $95 million Biosciences Building, currently under construction and scheduled to open for classes in January 2017.

“The BSL3 lab will make it possible for us to conduct research on M. tuberculosis itself rather than similar model organisms,” Swarts said. “Research on the actual bacterium will lead to data that will be more relevant to direct clinical translation.”

Each year, March 24 is World Tuberculosis Day. The day — one of the World Health Organization’s eight official global public health campaigns — is designed to build public awareness that tuberculosis remains an epidemic in much of the world, causing the deaths of nearly 1.5 million people each year, mostly in developing countries.