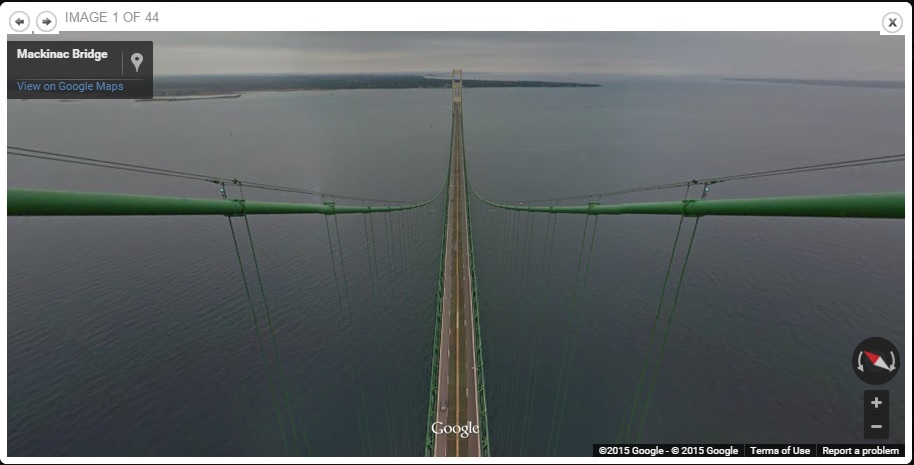 LANSING — Google Street View now extends to some of the most scenic, amazing spots in Michigan.

Google’s Street View Trekker system has been on a little jaunt recently, shooting more than 44,000 panoramic photos by members and volunteers from the Michigan Economic Development Corp. and the Department of Natural Resources.

Michigan was the first Midwest state to partner with the search giant on making photos of popular tourist destinations available on Google Street View — whether or not a street is involved.

Street View Trekker is a backpack system with a camera on top that is worn by an operator who walks through pedestrian walkways or trails on foot — or, in the case of some Michigan locations, by kayak. The imagery is captured automatically and stitched together to create the 360 degree panoramas seen on Google Maps.

Have you ever imagined what it’s like to stand atop the Mackinac Bridge? Now, using Google Maps Street View, you can — from anywhere.

These sites join other natural wonders, including the Grand Canyon, the Taj Mahal, the Great Pyramids, the Galapagos Islands and many more available in the Street View feature of Google Maps.

For more information and to view other Michigan destinations on Google Maps Street view, visit www.michigan.org/GoogleTrekker.

As for Street View Trekker, the system consists of 15 lenses at the top of the mast, each pointed in a different direction, which enables a single system to capture a 360-degree panoramic view. As the operator walks, photos are taken every 2.5 seconds. The Trekker weighs about 40 pounds and is the size of a large hiking backpack. It’s about 4 feet in height when set on the ground, and when worn, the camera system extends two feet abovethe operator’s shoulders. The Trekker battery can last around six to eight hours on a full charge.

The trip up the innards of the Mackinac Bridge was particularly memorable. According to Robert Sweeney, executive director of the Mackinac Bridge Authority, the trek to the top of the bridge can be characterized by feelings of anticipation and exhilaration. The climb starts by navigating a series of small openings, similar to what you would expect on a submarine.

There are 2,500 cells in each tower that range in size from 6 cubic feet to 60 cubic feet. Needless to say, Pure Michigan ran into a bit of trouble getting the Trekker to the top…but they made it. And the view is amazing.