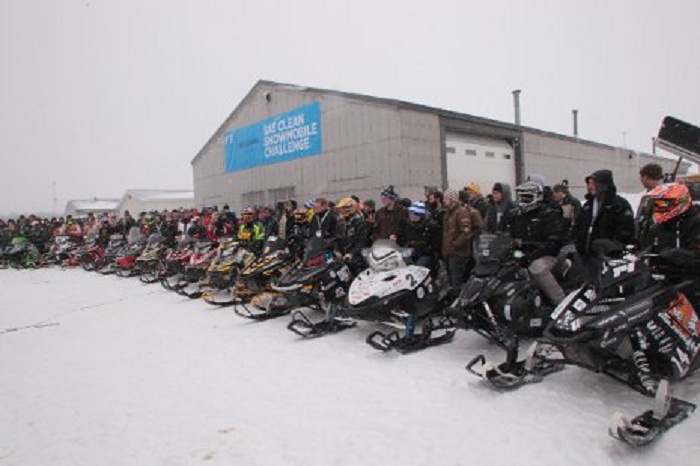 For one, all teams made it to Houghton, where Michigan Technological University hosts the events — no easy feat, considering the fundraising, travel and time required of the college teams. This includes Finnish students from the Lapland University of Applied Sciences who are also the first competitors outside North America participating in the SAE International competition.

And now the teams set a new record. For the first time ever, 11 teams made the trek from the Keweenaw Research Center test courses to downtown Copper Harbor, a total of 95.5 miles. Last year, nine teams completed the run, which was a record itself. This is a challenging part of the week-long competition, and historically as many as half the contestants are unable to complete the endurance run.

All teams arrived in Copper Harbor in the early afternoon on Tuesday March 3. Several inches of fresh snow blanketed the trail, and thick snowflakes fell as the winning teams pulled into town.

“This is a monumental moment,” said Jay Meldrum, event organizer and Director of the Keweenaw Research Center, as the teams lined their sleds up on the snowy side street. Meldrum has overseen the challenge for the 13 years it has run in Michigan. “I’ve watched this event grow — I’ve gotten to know these students as they come back year after year — and now we’ve set a new record.”

The Clean Snowmobile Challenge is truly a challenge. Meldrum calls it a “week-long marathon,” and the competition reflects how difficult it is to design and build cleaner, quieter snowmobiles. The students compete in three categories: internal combustion engines, diesel utility engines, and electric engines.

The rules are stringent. The emissions tests are modeled after Environmental Protection Agency standards; the initial inspection is thorough and performed by engineering professionals. And fine-tuning the sleds to pass inspection requires a lot of trial and error.

“The hard work is worth it when you see your sled doing what it’s designed to do,” says Ryan Stingle, Michigan Tech’s engine lead for the internal combustion team. “It’s a lot of late nights,” he also admits.

The challenge is particularly true for the electric sled category, which features prototypes funded by the National Science Foundation. The snowmobiles have potential use in remote Arctic and Antarctic research sites where hydrocarbon emissions could contaminate samples.

By the afternoon of March 2, only one of six teams was able to pass inspection and compete with their electric sled. And this snowmobile was shipped from Finland.

Even though the sled was damaged en route, students from the Lapland University of Applied Sciences in Rovaniemi, Finland successfully assembled, tweaked and started their electric snowmobile. Instead of the endurance run, the electric sleds compete in a range event to see how far the sled goes before the battery dies. The Finnish team pushed to 18.2 miles; the current record is about 20 miles.

The competition continues the rest of this week with technical presentations, emissions tests and noise tests. The Saturday acceleration and handling events are open to the public, which is the only time throughout the year when the Keweenaw Research Center allows public visitors.

Watch for updates on the event’s Facebook page, https://www.facebook.com/SAECleanSnowmobileChallenge. On Twitter, the university is also tweeting live @MichiganTech for all #cleansnowmobile events.