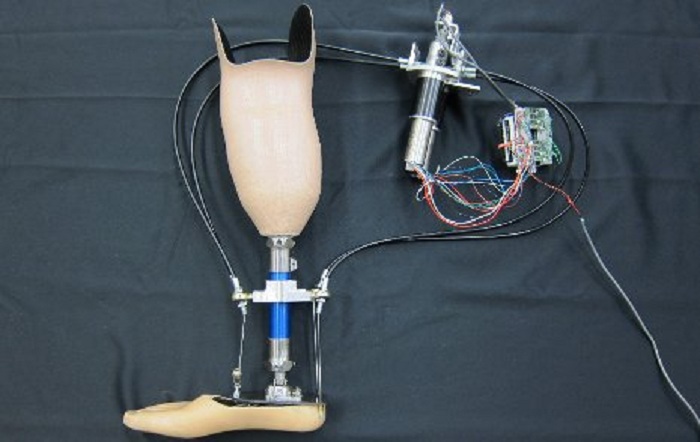 HOUGHTON — Mo Rastgaar is poised to take a giant step forward in the development of a better prosthetic ankle.

The Michigan Technological University mechanical engineer and his team have already developed a prototype that can provide a range of motion that rivals a natural gait. Next, they aim to give their robotic ankle something different: eyes.

“We are developing an artificial vision system,” Rastgaar said. The key components are a low-cost camera and a computer-controlled actuator, which adjusts the ankle’s position through a system of cables.

“The camera can identify the profile of the ground, while the computer knows where the next footstep will be, based on how the user is moving the leg,” Rastgaar said. “Then the computer analyzes the information from the camera and applies the correct angle and stiffness to the ankle, just as you would with your biological foot and ankle.”

Thus, the ankle could adapt precisely, whether the user is climbing stairs or striding over a pothole.

Rastgaar’s team has also refined the actuator’s design, making it lighter and more streamlined. Because the foot is moved by lines similar to bicycle brake cables, the actuator does not have to be mounted on the prosthesis, where the user must to move it with every step. Instead, it could be carried in a pocket or fanny pack, for example.

“Also, this new actuator system will be easy to remove, so you can use it or not, based on your needs,”Rastgaar saie. “If the user is going to stay at home, it might be simpler to walk around the house with a passive prosthesis.”

He hopes that eventually their robotic ankle will find its way out of the lab and onto the sidewalk.

“One of these days, we hope this can be brought to market, where it could really help people,”he said.

The research is being partially supported by a five-year Faculty Early Career Development Award, a prestigious grant given to promising young university researchers by the National Science Foundation. A provisional patent has also been issued for the technology.

In addition to Rastgaar, researchers involved in advancing the project include Nina Mahmoudian, assistant professor of mechanical engineering-engineering mechanics at Michigan Tech; Ph.D. candidate Evandro Ficanha; Ph.D. student Guilherme Ribeiro; Kenton R. Kaufman, professor and director of the Biomechanics and Motion Analysis Laboratory at the Mayo Clinic; and Neville Hogan, professor and director of Newman Laboratory for Biomechanics and Human Rehabilitation at the Massachusetts Institute of Technology.

Rastgaar is an assistant professor of mechanical engineering-engineering mechanics at Michigan Tech.