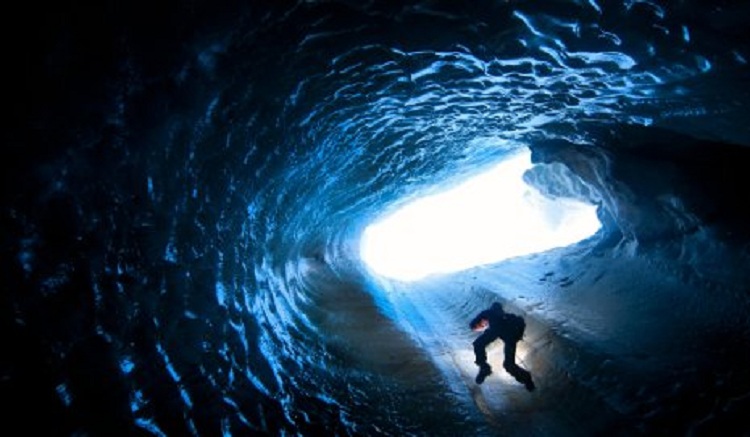 HOUGHTON — Soft spoken and with the wiry frame of an avid outdoorsman, Jason Gulley’s eyes light up when asked about caves.

“They have a mystery around them,” he says. “Even with the oceans we know where the deepest parts are, but with caves, you never know how long or how hard it’s going to be to get where you’re going.”

Scientists have not figured out how caves interact with the landscape, creating changes in hydrological and geochemical processes that can cascade throughout an entire ecosystem, sometimes to profound effect. And it is those profound effects Gulley, an assistant professor of geological and mining engineering and sciences at Michigan Technological University, wants to understand better — not just through mathematical models or theoretical predictions, but with hard evidence collected in some of the world’s most challenging natural environments: arctic glaciers and coastal caves.

His fascination with caves started as a child, first from books, then from Wild Cave Tours when he donned a hard hat and “crawled along with park rangers,” a pastime he found “totally fascinating.”

In college, he expanded from amateur spelunking to cave diving, which spurred curiosity about the caves themselves. He wanted to know how limestone caves in Florida were formed, how water wended its way from surface to underground and out again.

A chance encounter with a glaciologist while he was rock climbing got Gulley thinking about similarities between these two seemingly opposite environments — karst aquifers (limestone caves) in semi-tropical and tropical climes, and glaciers found in cold, mountainous regions. Both are self-organizing systems; both have fissures at the surface that efficiently carry water; and both, he reasoned, could be analyzed by similar scientific methods.

Until Gulley and his team, no one was doing scientific research inside glaciers. Most hydrological research had been done via numerical models and proxy techniques like ground-penetrating radar or dye tracing. But in Alaska, and later Svalbard and Greenland, Gulley changed all that — rappelling into crevasses and setting up instruments to monitor melt water and to map glacier caves and flow paths. Traditional theory predicted that differences in ice thickness and slope primarily governed how much water pressure would occur at the base of glaciers, and thus be the key factors in determining glacier sliding speed. Gulley’s direct observations, however, showed that the presence of moulins (naturally occurring tunnels that bring melt water from the surface to the base) play a more important role than ice thickness and slope in subglacial recharge.

We cannot accurately predict sea level rise until we better understand the processes that are happening at the base of the glaciers — where the water is coming from that lubricates the interface between the ice and underlying rock and other factors that may speed or slow their movement. When scientists initially discovered that moulins were moving water to the base of the glacier, they predicted a runaway effect of acceleration: As the climate warmed, there’d be more melt water, and with more melt water delivered to the base, the glaciers would move faster.

But instead, as Gulley said, “There are other factors at work, a kind of threshold. You get some acceleration, but as the drainage system evolves and becomes more efficient, the lubrication effect decreases, because you are able to flush most of the melt water away from the base of the glacier, so it slows down. But we don’t really understand how that process works right now. We are pretty sure we won’t have this massive runaway, but still don’t know exactly what will happen because we don’t understand the basic physics.”

Whether it’s diving into the dark underground pools in Mexico’s Yucatan Peninsula or rappelling into the blindingly bright ice caves in the Arctic Circle, Gulley is helping us understand the basic physics of environmental systems in a way no armchair academic can, and is unlocking a bit of the mystery with each expedition.