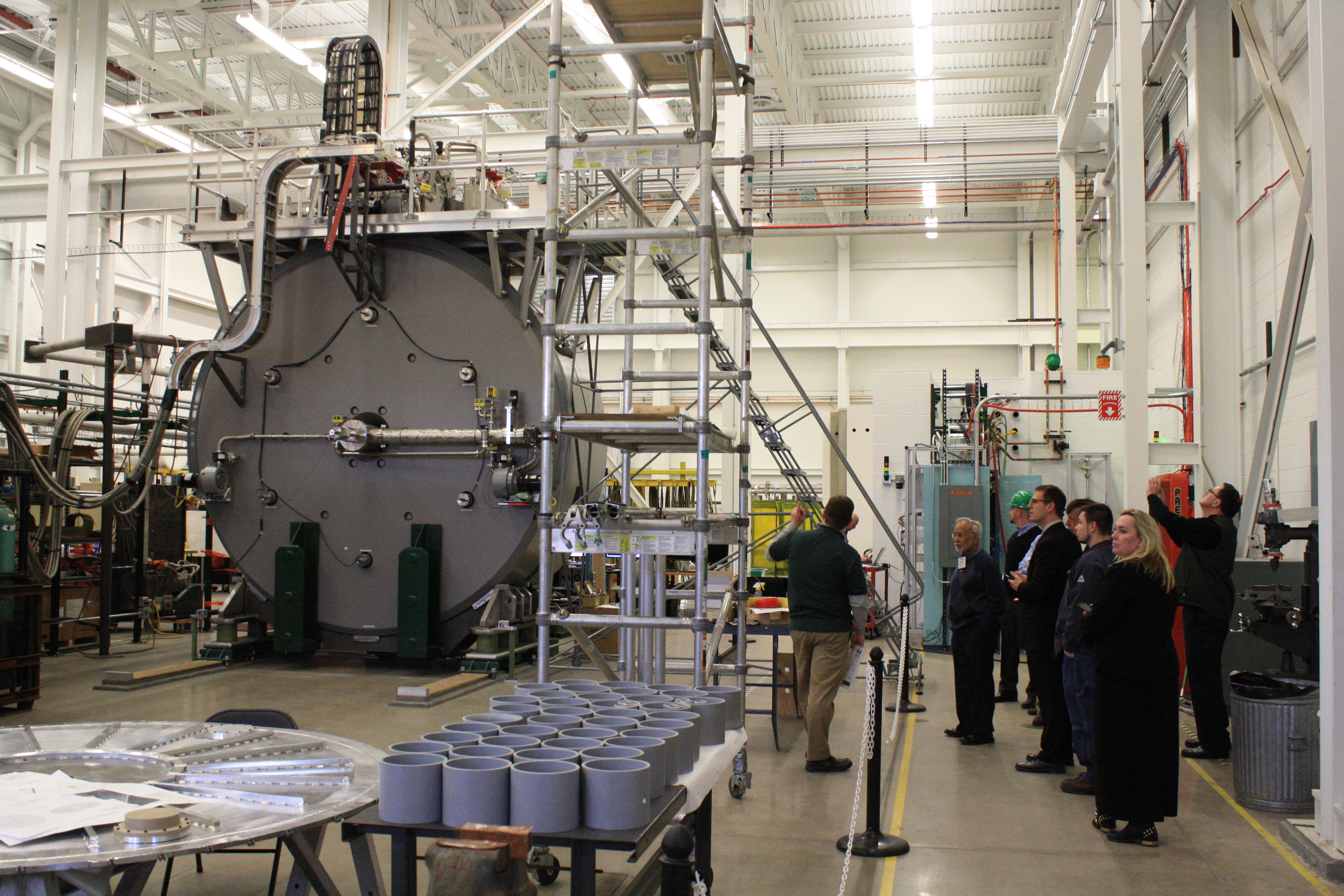 EAST LANSING — When objects collide at half the speed of light, really interesting stuff happens.

Even when those objects are tiny — atomic nuclei, too small to see except with the most advanced microscopes.

Twenty members of The Engineering Society of Detroit got an up close and personal look at the technology behind the nation’s No. 1 graduate program in nuclear physics Thursday, at an ESD members-only tour of the National Superconducting Cyclotron Laboratory at Michigan State University.

Zachary Constan, outreach coordinator at the NSCL, entertained the members with a lively presentation and led a walking tour during the two-hour event.

Constan also provided plenty of details on what will become the NSCL’s successor — the $730 million Facility for Rare Isotope Beams, now under construction just south of the NSCL.

Scheduled for completion in 2022, the FRIB will provide intense beams of rare isotopes — short-lived nuclei not normally found on Earth. FRIB will enable scientists to make discoveries about the properties of these rare isotopes in order to better understand the structure of nuclei, nuclear astrophysics, and other applications. Many of the isotopes are also used in medical diagnosis and treatment — today’s CT and MRI scans, for example, had their origins in nuclear research.

Constan said hundreds of experiments a year are proposed to be run in the cyclotron. Proposals are reviewed by a committee of top scientists. Only about a third of the applications are approved.

About 600 people work at the NSCL and the under-construction FRIB — 40 research faculty, 140 students (split about equally between graduate students and undergrads), the rest technical and support staff that keep the machine running.

And what a machine it is. At the NSCL, Two cyclotrons — essentially giant circular sets of electromagnets — accelerate tiny amounts of various elements to half the speed of light, or about 90,000 miles a second (that’s 325 million miles an hour). High voltage accelerates the materials because they’ve been stripped of electrons — which gives them an electrical charge — until they’re basically just atomic nuclei. Then, those streams of nuclei are magnetically steered into collisions with a foil made of the metal beryllium, which cracks them apart. Analyzing the results of those collisions provides clues to conditions inside stars, conditions of the early universe, and produces rare materials that have medical and industrial applications.

Yes, Constan says, the NSCL produces radioactive material — that’s why it’s shielded with six-foot-thick concrete walls. But that material is tiny in quantity. And, he added, “most of what’s really interesting has a half-life of less than a second,” which means all you have to do to turn off the radioactivity is turn off the switch on the experiment.

The FRIB, Constan says, will be significantly more powerful and have a much larger capacity to fire more nuclei at targets than the NSCL. So much so, he said, that “an experiment that would take two weeks with our current cyclotron will take about an hour” in the FRIB.

It’ll also require a significant addition to the MSU power plant. The NSCL is already the plant’s largest customer, using 3 megawatts of power when it’s switched on. Running the FRIB will require 14 megawatts.

But both the NSCL and FRIB are as energy-efficient as they can be to do what’s necessary to make them scientifically valuable. That’s where superconductivity comes in. The components of the electromagnets are made of niobium, a metal that is superconducting — that is, it has near-zero electrical resistance — at extremely cold temperatures. The FRIB, like the NSCL, will use supercold liquid helium and liquid nitrogen to chill the components down close to absolute zero to achieve superconductivity in the niobium. Using superconductivity sharply cuts the amount of electricity required to run the apparatus. The experiments also take place in vacuum, meaning the inside of the apparatus must have all air pumped out. (In fact, the dominant noise inside the NSCL is the constant drone of vacuum pumps.)

All in all, it was a fascinating afternoon at MSU, and another successful ESD tour. Watch this space for announcements of future ESD tours, another benefit of ESD membership.

More about the NSCL and the FRIB at http://www.nscl.msu.edu/ and http://www.frib.msu.edu/.