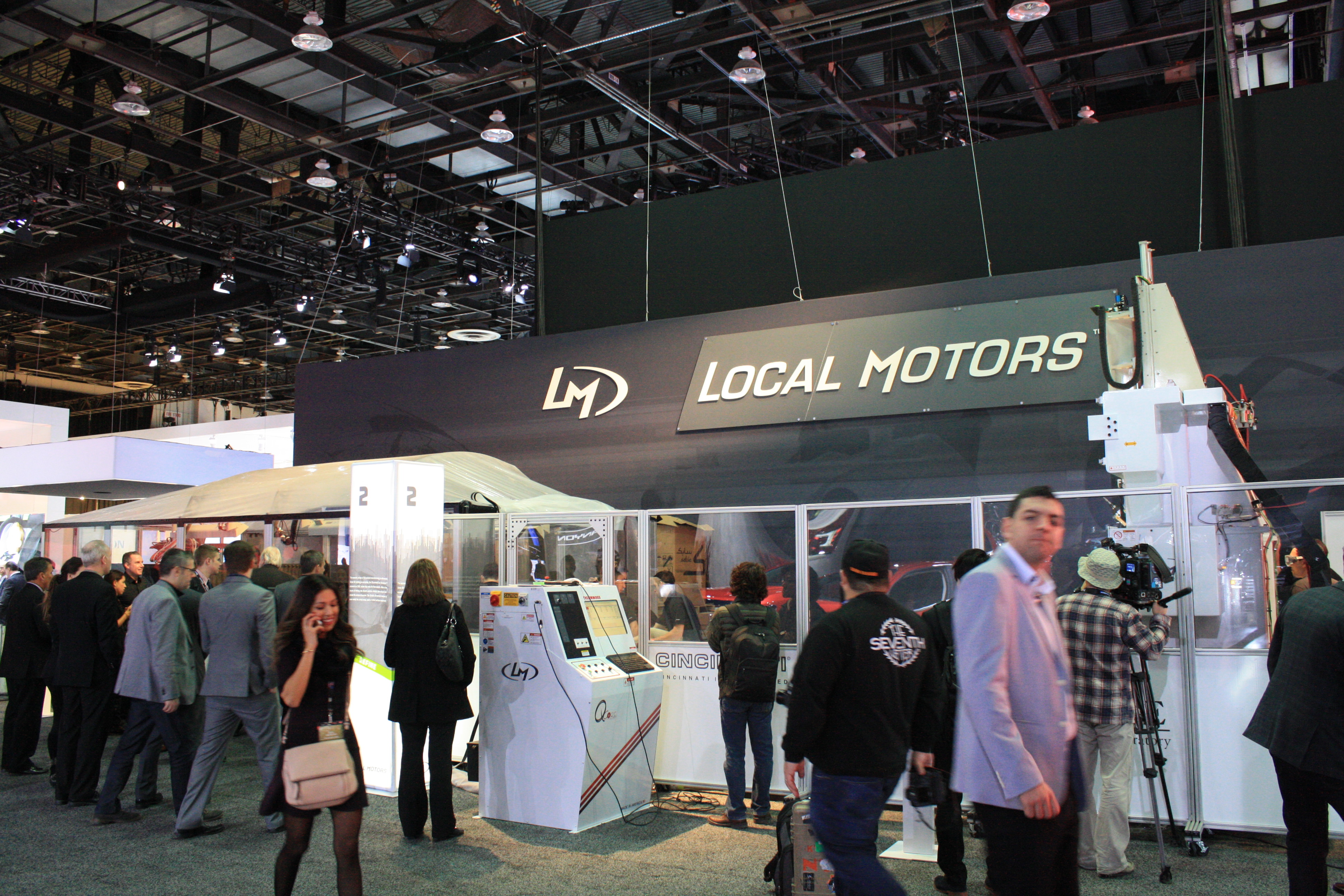 DETROIT — It’s the second day they’ve let me in to the North American International Auto Show Press Preview, and here’s the scoop…

* Probably the weirdest new product reveal came from Phoenix,
Ariz.-based Local Motors, which displayed a vehicle made by a 3D
printer. It had kind of a Lego vibe and was pretty cool. Anyway, Local
Motors announced that it will open vehicle “microfactories” at the Oak Ridge National Laboratory in Knoxville, Tenn., and in the National Harbor development near Washington, D.C. The company’s 3D printed cars are made from ABS plastic that has been infused with carbon fiber. The company says it’s testing the materials and processes involved before the cars can be sold commercially. (And for those keeping track, it takes Local Motors’ giant 3D printer 44 hours to make a car, printing 212 layers of the plastic.

* Verizon Wireless picked NAIAS to roll out Verizon Vehicle, a new driver assistance service that will bring OnStar-like services to any car made after 1996. According to Eric Goldman, president of Verizon Telematics, the system consists of a wireless-enabled sensor that plugs into a vehicle’s diagnostic system port, a Bluetooth two-way speaker that attaches to the driver’s sun visor, and an optional phone app. The sensor will monitor the vehicle and alert the driver to mechanical problems, and call for help automatically if there’s a crash. The service costs $15 a month and is scheduled to launch in April. Driver’s don’t need to have Verizon phone service to buy Verizon Vehicle. “Regardless of the carrier you use, Verizon will connect your vehicle,” Goldman said. The system will provide roadside assistance with GPS accuracy through the module. It will also send maintenance reminders and connect drivers with mechanics for repair advice. Appearing with Goldman was the reigning Verizon IndyCar champ, Will Power (yes, that’s his actual name). Both men were visibly reading from a teleprompter, and while I’m sure Goldman knows his telematics and Power obviously knows his racing, let’s just say they’re no threat to win any acting awards.

* Shortly after Verizon’s announcement, AT&T reminded the meedja of a similar service it offers with a Canadian company called Mojio that was announced Sunday. OnStar also sells an aftermarket rear view mirror device that provides, well, OnStar. The folks at websites like CNet and Gizmodo also say lots of companies are getting into the aftermarket smart car game, so it’s a good time to be a buyer of this stuff — lots of deals.

* Lincoln — tucked far back in the northeast corner of Cobo behind the Ford exhibit — debuted a new MKX crossover. The company touted a high-end sound system and a 2.7-liter EcoBoost V6 engine that offers more than 330 horsepower and more than 370 foot-pounds of torque. The power flows through a six-speed automatic transmission, and all-wheel drive is available. There’s also an available Drive Control unit that adjusts handling and other technology for three modes — normal, sport and comfort. Other tech available includes adaptive cruise control, a lane-keeping system, blind spot information system, cross-traffic alert, a 360-degree camera, parking assist and more. The car also has pre-collision assist, which will first provide a collision warning and then automatically apply braking if the driver has not taken any corrective action. Also new is the Auto Hold feature, which relieves the driver from having to press the brake pedal continuously to keep the vehicle stationary in traffic. Auto Hold releases the brakes when the accelerator pedal is pressed. Also, LED headlamps include a feature that adapts when accelerating from 0 to 35 mph by adding width to the low-beam pattern through the use of LED reflector elements. Always-on, built-in connectivity is provided through an available embedded modem. Via a smartphone app that communicates with the vehicle, the available MyLincoln Mobile app gives owners the ability to start, lock, unlock and locate their vehicle, as well as schedule a remote start.

* Milwaukee-based Johnson Controls Inc., whose automotive division is based in Plymouth, showed off ligher-weight and sustainable products as part of NAIAS. Included were a novel single-step molding technology called compression hybrid molding that can make door panels, floor consoles and instrument panels 40 percent ligher; novel foils to give new, luxurious appearance to automotive interiors; an arm rest assembly that saves 30 percent in weight; a slimmer, lighter overhead console; and more. More at  www.johnsoncontrols-naias.com.

* Press room is way less crowded today. Most of the big reveals have
already been, well, revealed. And besides, reporters have the
attention span of ferrets.

* And my favorite thing about the press room? Without a doubt, the
unlimited soda fountain. As much Coke Zero as I can swill. Be still my
heart. No, really, I’m having palpitations. Better make the next one a
water.

* I’m rethinking my love affair with the BMW i3 electric. I just really wonder how it would ride on those skinny little tires — they look almost like off-road bicycle tires. I know, low rolling resistance and all that, but I’d have to drive it — and see how fast I could go on a curvy road — to be sure.

* Fiat Chrysler’s Ram brand introduced two new trucks, the 2015 Ram 1500 Rebel and the Ram 1500 Ecodiesel. The truck is a billboard for Ram, with the brand in huge letters front and rear. It sports huge standard 33-inch tires and raised suspension with a 10-inch ground clearance. Buyers will have a couple of powertrains to choose from – the 5.7-liter Hemi V-8 with 395 horsepower and 410 foot-pounds of torque and the 3.6-liter Pentastar V-6 engine with 305 horsepower and 269 foot-pounds of torque. The Ram 1500 Ecodiesel promises 29 mpg – the highest fuel economy of all pickup trucks in the industry. The trucks are built at the Warren Truck Assembly Plant.

* Cadillac introduced a CTS-V high performance version of its midsize sedan as it continues efforts to end a sales slump. Cadillac President Johan de Nysschen said the brand will introduce eight all-new vehicles by 2020, five in segments where the brand currently doesn’t have products. That will require an investment of about $12 billion, he said. The CTS-V boasts 640 horsepower and 630 foot-pounds of torque, making it the most powerful vehicle in Cadillac history, and races from zero to 60 mph in 3.7 seconds, with a top speed of 200 mph, all provided by a new 6.2-liter V8 engine. The car also sports advanced ride control technology (at 200 mph it had better).