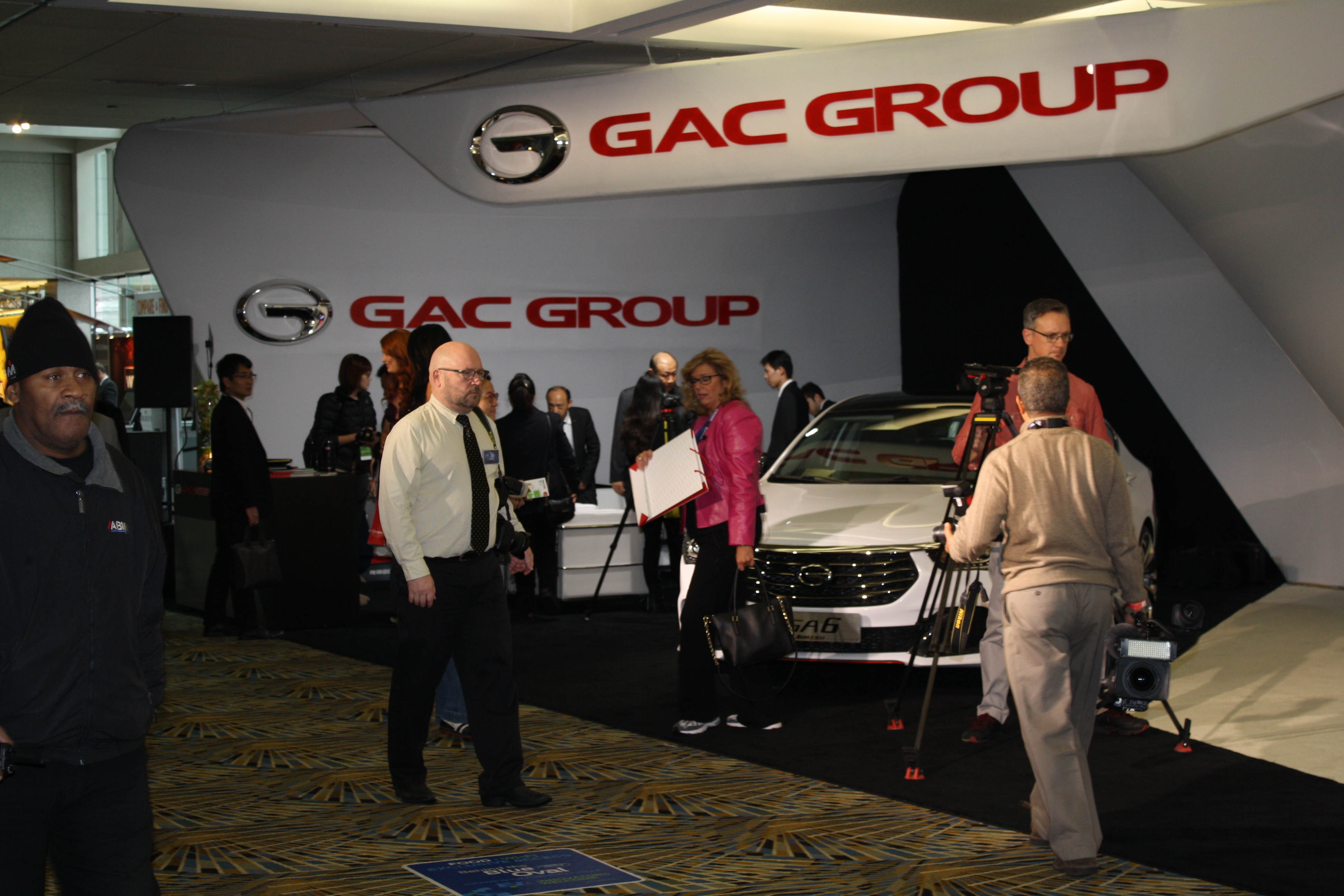 DETROIT — Your favorite technology website and magazine finally found a place to park Monday morning in jam-packed downtown Detroit at the North American International Auto Show’s Press Preview days. So now it’s time to look at the cars and trucks.

Technology Century will be reporting Monday and Tuesday from
NAIAS, getting an exclusive look at the dozens of new models on
display.

You might think that with gasoline going for less than $1.70 a gallon in some places in Michigan, the focus this year would be off automotive technology and onto pure power. Wrong again, bucko. Yes, there are tons of gloriously fast cars here that are a blast to drive. But that fun has never had a higher high-tech quotient. Driver assistance blending into almost autonomous driving, super high-efficiency engines, electric and hybrid options, and a mind-blowing array of electronics and infotainment features. That’s today’s car and truck.

Let’s take a look at the announcements made already Monday:

*The new aluminum-bodied Ford F-150 was named North American
Truck of the Year by a jury of U.S. and Canadian auto journalists. The
aluminum alloy body, which Ford likes to call “military grade”
repeatedly, saves 700 pounds on the vehicle, boosting its hauling
capacity and MPG. The power plant is a 2.7-liter V6 that automatically shuts off when the truck’s at a stop (that’s the lightest of light hybrid technologies). There are also LED headlamps and a 360-degree camera system among the high-tech goodies.

* Ford also introduced a new push in carbon fiber research with a unit of Midland’s Dow Chemical Co. and the U.S. Department of Energy. Ford says high-volume, low-cost carbon fiber components will reduce vehicle weight for increased fuel efficiency without sacrificing strength. The creation of a new Institute for Advanced Composites Manufacturing Innovation is intended to accelerate research and development of low-cost, high-volume carbon fiber. The institute is part of the larger National Network for Manufacturing Innovation supported by the U.S. Department of Energy. In this venture, Ford will be working with DowAksa, a joint venture between Dow Chemical and Aksa Akrilik Kimya Sanayii A.Ş., a Turkish company manufacturing carbon fiber and acrylics.

* The French auto supplier Faurecia, with its North American
headquarters in Auburn Hills, debuted nearly three dozen new
technologies and processes at the auto show. “Less Is More” was the
theme, with technologies that weigh less, boosting mileage and
cutting emissions, while at the same time providing more comfort and roominess for passengers, more flexibility for vehicle designers and more natural materials for improved sustainability. New applications of technology and materials inside, outside and under the vehicle were highlighted in products from all four of the company’s business groups: Faurecia Interior Systems, Faurecia Emissions Control Technologies, Faurecia Automotive Seating and Faurecia Automotive Exteriors. Included are thinner, roomier seats built on hybrid frames, a fiberglass composite rear floor and trunk, a one-piece, injection-molded window lifter, and a lift gate made entirely of carbon-fiber composites that weighs only half as much as a conventional steel lift gate. Other Faurecia exhibits introduce a full-size premium trunk floor surface composed of lightweight natural wood materials, an industry award-winning active glove box that replaces separate knee-impact airbags, a universal docking station with Bluetooth and near-field communication capabilities, a family of new technologies to reduce nitrogen oxide emissions from diesel engines, a compact exhaust-heat-recovery system now extended from hybrids to all-gasoline engines, and technologies to control the levels and types of sound emitted by exhaust systems.

* Ford also announced it is rolling out Ford Sync AppLink next year,
giving customers an improved way to access their favorite navigation apps on in-vehicle touch screens, just like they can on a smartphone. Ford is working with the Chinese Internet service provider Alibaba Group in this effort.

* And cars? Oh yeah, cars. Ford rolled out a new carbon-fiber-bodied
GT supercar with advances in “lightweighting,” aerodynamics, and
engine efficiency. Of course, it’s turbocharged V6 still makes more
than 600 hp. It’s scheduled to go into production in 2016. The GT is
rear wheel drive with a mid-mounted engine, and active aerodynamics that change the shape of the car as speeds rise and fall for maximum efficiency. Ford also rolled out the new Shelby GT350R Mustang, which combines race ready and road legal into a delightfully dangerous package. It features the most powerful naturally aspirated engine Ford has ever produced — 5.2 liters producing more than 500 horsepower and more than 400 foot-pounds of torque.

* Chevrolet launched an improved 2016 Chevrolet Volt plug-in hybrid and a Chevrolet Bolt EV concept car. The new Volt boasts an
electric-only range that has been boosted to 50 miles, a 20 percent
improvement in zero-to-30-mph acceleration time to 2.6 seconds, and a new 1.5-liter EcoTec engine. The Volt is also 200 pounds lighter than its predecessor. The new Volt also offers seating for five, a major bugaboo with the original Volt, which had only seating for four. The Bolt is intended to have a 200-mile range, going a long way to alleviate EV “range anxiety,” and a price tag under $30,000.

* Another nifty high-tech touch on the new Ford F-150 Raptor version is automatic switching of its powertrain, driveline, traction control, ABS and AdvanceTrac stability control for optimal performance. There are six preset modes for the truck depending on terrain and driving conditions: Normal mode for everyday driving; street mode for higher-performance, on-road driving; weather mode for rain, snow or ice; mud and sand mode for muddy and sandy trails and terrain; baja mode for high-speed desert running; and rock mode for low-speed rock crawling.

* The Novi-based Lacks Wheel Trim Systems LLC business unit of Grand Rapids-based Lacks Enterprises Inc. says it will sponsor the 2015 EyesOn Design Award for Design Excellence – Production Vehicle. As part of Lacks’ ongoing partnership with EyesOn Design — a design competition and car show organization — the company will unveil its new Advanced Composite Wheel during the EyesOn Design events and throughout the day, Tuesday. The display and prototype will be shown in the lower level of Cobo Center.

* Two Japanese auto brands debuted new trucks at NAIAS very much intended for the North American audience. Toyota rolled out the new Tacoma, a midsized truck primarily designed at the Toyota Technical Center in Ann Arbor. Engine choices include a 2.7-liter four-cylinder and an all-new 3.5-liter V6. Both engines will be paired to a new six-speed automatic transmission with electronic shift. The V6 can also be mated to a new six-speed manual transmission. Tech touches available as options include wireless gadget charging, push-button start, a blind spot monitor and rear cross-traffic alert. And Nissan rolled out the successor to its Titan large pickup. Included is an available 5.0-liter V8 Cummins diesel enigne with 555 foot-pounds of torque, capable of towing more than 12,000 pounds. Tech gadgets available in this vehicle include a 360-degree monitor with moving object detection, blind spot warning and a front and rear sonar system. The truck was engineered and built by Nissan in Michigan, Tennessee, California, Arizona and Mississippi.

(Photo: The Chinese automaker GAC is on the scene at NAIAS.)