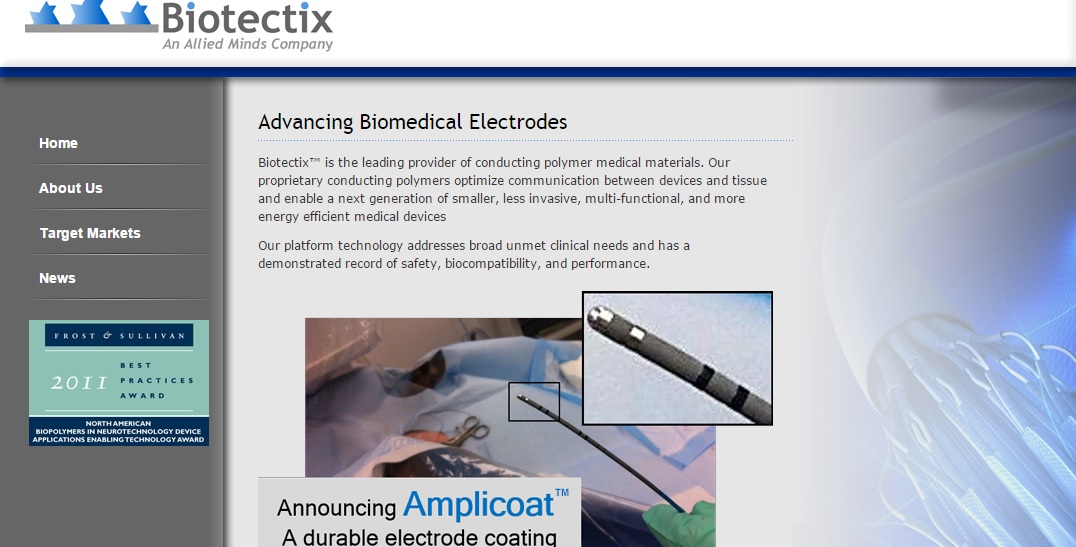 The company says the new coating, Amplicoat, is available for license and commercialization on medical devices through Biotectix. The target market is cardiac and nervous system device makers.

The company said Amplicoat is designed to enhance communication at the interface between human tissue and the medical device electrode. The company also said Amplicoat overcomes the limitations of other conductive coatings, including poor durability, difficult processing requirements, and limited performance.

Biotectix says Amplicoat can be easily applied to a variety of metal electrodes in medical implants, including those used for nerve stimulation, cardiac pacing, electrophysiology recordings, cochlear implants, and gastrointestinal recording and stimulation. The company says Amplicoat will enable smaller, less invasive and highly targeted devices.

“Amplicoat is a true breakthrough technology that provides a durable electrode coating that conducts both ionically and electronically, resulting in lower impedance and an expanded range for safe charge delivery,“ said Dr. Sarah Richardson-Burns, who co-founded Biotectix with Jeff Hendricks, PhD.

“I am very proud of the Biotectix team. The dedication and knowledge needed to commercialize this technology was significant,” said Omar Amirana, M.D., Biotectix CEO and senior vice president of Boston-based Allied Minds (LSE: ALM), the parent company of Biotectix.

Biotectix says it is currently working with customers to incorporate Amplicoat into their medical devices. In addition, there are non-medical applications for conductive coatings, which are currently under development at Biotectix.

Biotectix was formed in 2007 through a joint venture between the University of Michigan and Allied Minds. Allied Minds was formed in 2006 as a science and technology development and commercialization company to form, fund, manage and build businesses based on technologies developed at United States universities and federal research institutions.