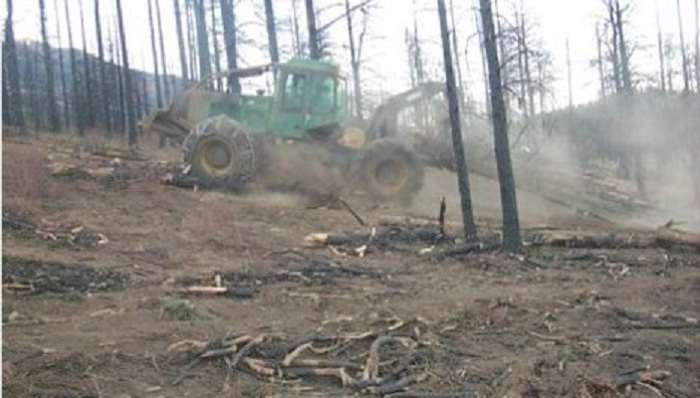 HOUGHTON — After a forest fire burns a large swath across timberlands, logging companies often are not far behind. They come in to do what is called salvage logging — salvaging the timber that has not been completely destroyed by the fire.

It sounds like a good idea, since even the timber from burned trees can be used for lumber. Economic benefit can come from otherwise devastated land. Even the name has a warm, fuzzy ring to it.

The only problem is, the ecological effects are unknown.

Actually, that’s not quite true. For over a decade, Joseph Wagenbrenner, assistant professor in Michigan Technological University’s School of Forest Resources and Environmental Science, has been examining salvage logging at four forest fire sites in Montana, Colorado and Washington. He and his research team studied the effects of salvage logging on the ground cover, soil compaction, sediment in water runoff, and regrowth of vegetation, compared to control plots that were not logged after a fire.

Specifically, they looked at the impact of various salvage logging practices, including the trails made by the most commonly used equipment: feller bunchers — heavy machines that drive uphill, cutting and piling up trees — and skidders, which pick up the piles of trees and drag them back downhill.

They found that the amount of sediment in runoff water increased measurably on the smaller plots, but the increase was not consistent on larger tracts of land. The amount of sediment running downhill and the compaction of the ground was greater where the feller bunchers and skidders were used. The more firmly compacted ground becomes, the less water can soak in and the more runoff and erosion can occur.

Wagenbrenner and colleagues published results of the US Forest Service-funded study in the January 2015 issue of the journal Forest Ecology and Management.

Why is sediment an issue? It can cause flooding, when streams and reservoirs get clogged. At one of the study sites, where the Hayman fire burned 140,000 acres of the Pike-San Isabel National Forest in central Colorado, the sediment runoff was so bad that one of the main reservoirs serving Denver had to be dredged.

Sediment can also damage fish habitat, raising water temperature and killing food sources. And it fills pools and streams with organic matter that is hard for water treatment plants to process, Wagenbrenner said.

His team’s recommendations for best management practices for salvage logging include:
* Leave slash on the ground
* Break up long feller-buncher and skidder trails with ”water bars” — mounds of dirt that slow and divert runoff.
* Decompact the soil after heavy equipment is used.
* Consider replanting vegetation, which works better than slash because it roots in the soil.

(Photo above: A skidder picks up cut trees and drags them downhill. Michigan Technological University photo.)