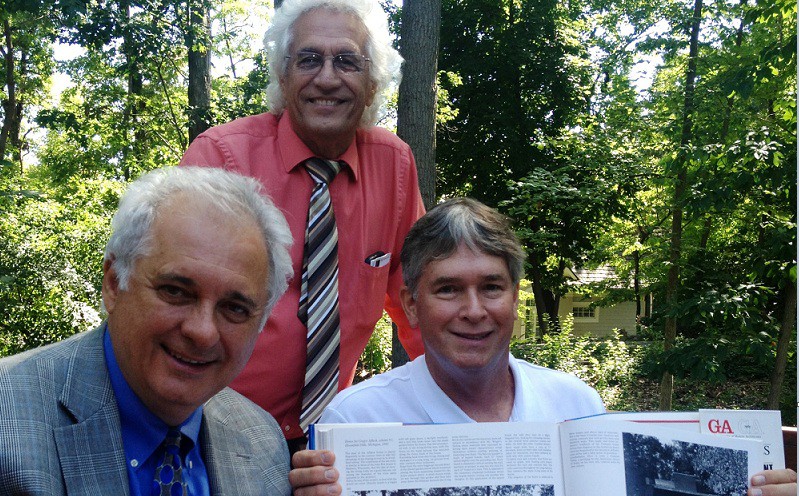 SOUTHFIELD — Lawrence Technological University has received a set of 12 rare monographs by famed architect Frank Lloyd Wright — with an assist from 1978 LTU architecture graduate Ben Tiseo, who is now an adjunct professor at the university.

When prominent Detroit-area engineer and architect Clifford Holforty died in July 2014, he left an extensive collection of architecture books. His family decided that the books should be donated to Michigan schools and libraries in his memory. While cataloging and supervising the documentation and distribution of the books, Holferty’s son-in-law, Grand Rapids architect Ralph W. Moxley, AIA, LEED AP, discovered a set of rare Frank Lloyd Wright monographs.

The 12 volumes were protected by individual cardboard boxes, and many appeared to have never been opened.

“After researching the monographs on the Internet, we found they were quite rare and very valuable,” Moxley said. “After some discussion, we determined that the 12 volumes should be donated to a Michigan architecture school for the students to utilize and study.”

Moxley mentioned his find to Tiseo, who suggested the monographs be donated to LTU because the university owns the Affleck House, a Frank Lloyd Wright-designed home in Bloomfield Hills. The home was donated to LTU in 1978 by the Affleck family and is being preserved for academic use and study.

The monographs were published in Japan and some of the text is in Japanese, according to Moxley.

Volumes 1 through 8 cover periods of Wright’s work, starting with 1887 through 1901 and ending with 1951 through 1959.Volumes 9 through 12 are preliminary studies from three time periods, and volume 12 contains renderings from throughout Wright’s career.

According to Tiseo, some eight pages in Volume 6 are dedicated to the Affleck House. In those pages are sketches and other drawings, including early development sketches.

“We had not seen these before,” said Tiseo, a member of the alumni restoration council overseeing ongoing restoration projects at the Affleck House. “This will be very helpful to the committee so as to guide our work in keeping with the intent of the Frank Lloyd Wright design.”

The 12-volume set demonstrates Wright’s genius as an architect and designer, according to Tiseo.

“What impressed me the most about the set is not just the breadth and depth of the projects covering FLW work, but also the progress sketches and details including its color reproductions,” Tiseo said. “This gift is truly a gem for LTU.”

The monographs will be housed at the LTU Library on the lower level of the Buell Management Building. They will be available for viewing, but cannot be checked out.

(In the photo above, LTU’s  Affleck House in Bloomfield Hills was the setting for Dean of Architecture and Design Glen LeRoy (left) and Adjunct Professor Ben Tiseo (center) to accept a set of rare Frank Lloyd Wright monographs from Grand Rapids architect Ralph Moxley (right).)