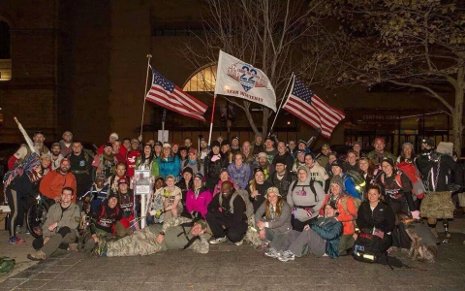 HOUGHTON — Twenty-two per day. Nearly one an hour. That’s how many veterans die each day, not from old age or combat injuries. At least, not physical injuries. Twenty-two veterans per day kill themselves.,

This toll is too much for Army Captain Justin Fitch, a combat veteran and Michigan Tech alumnus. The 2005 graduate has made it his mission to prevent veteran suicide, despite the fact that it is his final mission. Fitch, commander of a research and development engineering detachment, is himself dying of colon cancer.

“I can’t do the things I used to be able to do,” Fitch says. “I’m a company commander in the U.S. Army. And I love my job. It’s always been very interesting. But lately, it’s been surgeries, recovering from surgeries, chemo, report back to duty.”

It hasn’t done much to slow him down, though, and he’s determined to take as big of a chunk out of the number of veteran suicides as he can.

According to the Department of Veteran Affairs, 8,000 veterans a year commit suicide.

“We’ve had roughly 6,700 killed in action since 9/11, the longest stretch of continuous combat in US history,” Fitch said. “We lose more veterans to suicide every single year than that. I don’t view these as statistics. These are people. Imagine that a loaded Boeing 757 crashed into a mountainside every week. The nation would be interested in that. We would question the safety of those airplanes. That would be on the news. But suicide is a sad topic. People don’t want to hear it.”

Fitch, who was twice deployed to Iraq after his ROTC commissioning and graduation from Tech, is working with Carry the Fallen, part of the non-profit Active Heroes. Its focus is to bring together a community of veterans, family, friends and other dedicated volunteers to mitigate the effects of PTSD and reduce the trigger points that lead to these suicides. Fitch has taken a very active role in promoting and raising both funds and awareness for the organization.

“I get a bit of a platform because of my illness,” he said. “I’m proud to use this position to help get word out about the importance of the work we’re doing.”

That’s because, just as this retreat center is rising out of the Kentucky hills, the best way to help veterans suffering emotional distress is to create and maintain a support network, a space where feelings and struggle aren’t left unspoken.

Carry the Fallen is literally taking steps to make this happen.

On November 8, Fitch helped run a ruck march — a kind of equipped hike that is anything but easy — following the Boston Marathon route. Pictured above, the event raised funds and awareness about veterans’ mental health.

“Basically, you walk a long distance with a very heavy pack on — something like 50 pounds,” Fitch explains. “It symbolizes the way we need to help carry the load for these injured vets. The ruck marches last from three up to 22 hours, a significant number with us losing 22 veterans a day this way.”

Fitch participated, too, as much as he could, considering he finished a round of chemotherapy two days earlier. He has seen firsthand how inspirational these events have been.

“We had one veteran, Kristen Heavens, who did the Boston Marathon and the ruck back to back,” he said. “She started at the finish line, loaded up, and walked the entire course in reverse. She met us there in the morning, turned around and did another 26.2 miles. There’s a lot of positive energy there. For example, we know we had one person that day who was thinking about taking his own life but showed up and put a ruck on with us instead. He’s one who is still with us. That’s why we do this.”

More at www.mtu.edu. More about Carry the Fallen at http://carrythefallen.org.