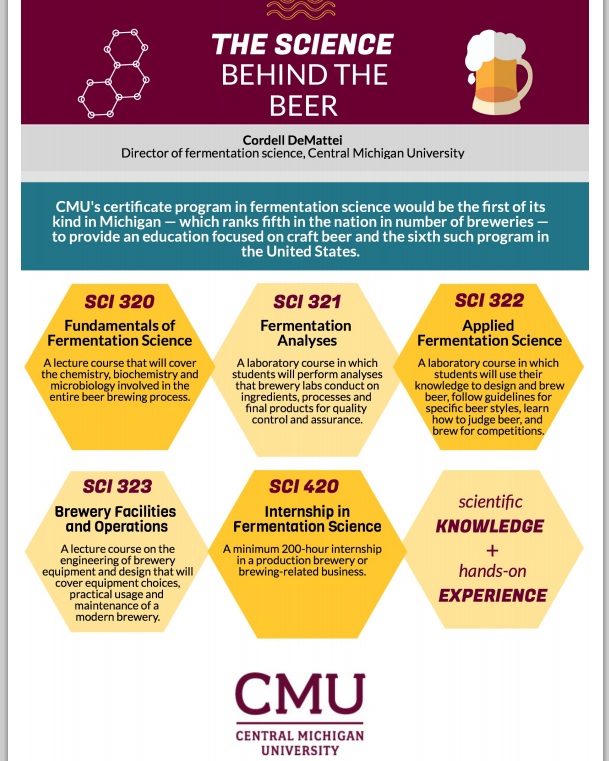 The brewing of a malt beverage is very scientific and can be understood by dividing the process into six distinct steps that include malting, mashing, boiling, fermentation, aging and finishing, and packaging. The program will require students to master topics in advanced sciences such as chemistry, biochemistry and microbiology — all of which are essential to understanding the
fermentation cycle and crafting a better beer.

Michigan’s expanding beer industry contributes significantly to the state’s economy. However, educational opportunities for Midwest brewers have not been able to keep pace with growth that has taken place in recent years. CMU officials say.

Similar to other university programs, students interested in the fermentation science program would apply to CMU to be admitted. Once enrolled, they would take five proposed advanced science classes that would cover all steps of the brewing process to complete the 16-credit-hour certificate, including:

• SCI 320: Fundamentals of Fermentation Science, a lecture course that will cover the chemistry, biochemistry and microbiology involved in the entire beer brewing process;

• SCI 321: Fermentation Analyses, a laboratory course in which students will perform analyses that brewery labs conduct on ingredients, processes and final products for quality control and assurance;

• SCI 322: Applied Fermentation Science, a laboratory course in which students will use their learned fermentation science knowledge to design and brew beer, follow guidelines for specific beer styles, learn how to judge beer, and brew for competitions;

• SCI 323: Brewery Facilities and Operations, a lecture course on the engineering of brewery equipment and design that will cover equipment choices, practical usage and maintenance of a modern, production-scale brewery; and

• SCI 420: Internship in Fermentation Science, a minimum 200-hour internship in a production brewery or brewing-related business.

Two local businesses, Mountain Town Brewing Co. and Hunter’s Ale House, are partners in the proposed fermentation science program, which is going through the academic curriculum process and is expected to enroll its first class in fall 2015.

“The educational opportunity offered with the fermentation science certificate program expands CMU’s leadership in the sciences,” DeMattei said. “It provides the training needed by future leaders of the craft brewing industry.”

CMU’s certificate program in fermentation science, the first of its kind in Michigan and the sixth such program in the United States, is expected to appeal to students both in and outside the sciences as well as to brewery employees looking to advance their careers. Those who take the program would be prepared for industry wide certification tests such as the Institute of Brewers and Distillers General Brewing Certificate and their Diploma in Brewing Modules.